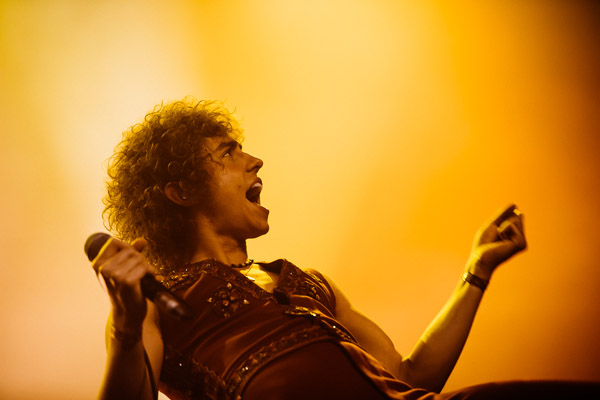 Monday November 4th will live long in the memory of the 1,300 punters who packed out Dublin’s Olympia Theatre. The world’s biggest opinion dividers Greta Van Fleet were in town and from outside the venue on Dame Street to the rammed stalls and upper circles you could sense a nervous excitement that you rarely experience at gigs anymore.

And the fact this was a rescheduled date from March added extra fizz, for this was one of those “I was there” gigs. Remember them?

Tonight saw varied generations witnessing the biggest Classic Rock phenomenon since you know who. Or on the other hand, catching them now before they spontaneously combust from media overload. But apart from the negativity surrounding ‘that comparison’, there is still a hell of a lot of love for the Michigan boys. Mammoth names like Joe Elliott, Elton John, Alice Cooper and Mike Portnoy all speak of them in glowing terms and ironically there’s even been a couple of backhanded compliments from Robert Plant and Jason Bonham.

The Kiszka brothers Josh, Jake and Sam are the bands main frontage and drummer Danny Wagner steadily brings up the rear. Although wholesome and fresh faced they possess a firebrand attitude to their craft that emanates through their on-stage demeanour but a dainty family affair like MMMBop-ers Hanson or happy clappy Mormon sweeties The Osmonds they most certainly are not. Rock’n’roll at its retroactive best is this bands calling card.

So at 9.20pm when the social media orks and begrudging naysayers were busy sticking pins in their GVF dolls, this 140-year-old theatre was preparing to absorb something very special indeed.

The song that announced their arrival to the world, ‘Highway Tune’, popped the cork to the evening in overwhelming vintage style. Josh Kiszka leaped out from the wings like Nureyev, decked out in a skin tight sequenced jumpsuit, barefooted and showered the crowd with flowers, and from here on in love was in the room. That continued into the extended ‘Edge Of Darkness’ with the flamboyant frontman enthusiastically doing his best to acknowledge everybody in the building. But he was out muscled by twin brother Jake who threw a plethora of shapes before slinging his Gibson SG overhead for a luscious solo.

Although only released in 2017, the extra large EP. ‘From The Fires’, already has a mini-iconic status and one of it’s leading lights, ‘Black Smoke Rising’, blew the roof off the building with its anthemic chorus. As soon as the opening bars of ‘You’re The One’ rang out, the Olympia Theatre literally became one, the crowd revelling in the laid back vibe and harmonious lyrics.

Not to be outdone, the baby of the family Sam Kiszka offloaded the bass and on his very unconventional looking keyboards delivered a shivering solo that set up the opening chimes to ‘Age Of Man’, which bore an emotionally resonating performance.

Throughout the night there wasn’t one downward shift of momentum as each song took the hand of the next and seemed to leave the majority ecstatic. Not much between song chit-chat either, but with the quality of music at their disposal, plastic smalltalk was never required. Main set closers ‘The Cold Wind’ and ‘When The Curtain Falls’ raised the bar yet again and Josh Kiszka was in full extravert mode, at times resembling a young prancing Freddie Mercury.

Taking a little bit longer than most would to return, the four-piece with a combined age of just eighty-six picked up where they left off with the hippy filled ‘Flower Power’ and although it didn’t herald mass acts of free love, those who arrived decked out in velvet waistcoats, midriff revealing shirts and bellbottoms must have momentarily felt of a different time.

This was a night nobody wanted to end but GVF made sure the finale was a memorable one. As soon as Jake Kiszka plucked the opening chord to ‘Safari Song’ the whole theatre was on their feet, some with fists pumping back and forth and some clapping and jerking their bodies like they inhaled something exotic.

With a barbaric Danny Wagner drum solo thrown in for good measure this was a truly powerful ending to a magical evening. The Dubliner’s headed out into the sodden wet streets high on music and trying to fully take in what they just witnessed.

Greta Van Fleet will most probably always carry the Zeppelin monkey on their backs but that hasn’t hampered their career thus far. So if you’re a lip-chewing non believer, maybe it’s time to start beating them with a different stick.

Next time they hit Dublin it may not be in such intimate surroundings, so tonight was an honour and a privilege.

Setlist:
Highway Tune
Edge Of Darkness
Black Smoke Rising
The Music Is You
You’re The One
Age Of Man
Watching Over
Mountain Of The Sun
The Cold Wind
When The Curtain Falls
Flower Power
Watch Me
Safari Song