Bound By The Horror is the new video and song by GOST, which, he tells us, “refers to how I started feeling boxed in creatively.” The track is taken from the new album Rites of Love and Reverence, which will be released Friday, 13 August.

GOST told us, “Bound by the Horror started the writing process for Rites of Love and Reverence. I wanted a heavy baseline to really start things off for this record, and Bound by the Horror is the result. Bound by the Horror refers to how I started feeling boxed in creatively. One of my favourites from the new album and a kind of goodbye to limiting expectations.”

The new album is a gothic journey, which covers ideas of supernatural wickedness and real-world retribution. “Witchcraft themes inspired the lyrics,” GOST says. “It’s mainly about how witchcraft has affected women throughout history. Witch trials and the subsequent executions throughout the ages terrify me.

“I fear, as a society, we are always on the verge of such horrible psychosis based on the misunderstanding and intolerance of one another. I try to educate myself on any historical subject I use as an influence, out of respect for the real people who lived through it.”

The second track released from the new album was A Fleeting Whisper. The song is “a homage to not only navigating spirituality but simply being human”, GOST explains. “The uncertainty of life makes living both beautiful and terrifying. We all carry around so many similar insecurities and feelings of doubt in this modern digital age.

“A time in our history which promises ultimate connectivity seems, all too often, to leave many of us feeling increasingly disconnected and alone. Music has always been a way for us to forget our differences and come together as a species.

“Personally, music has been the one true constant in my life and, in many ways, the only true spirituality I have found solace with. Like a fleeting whisper, sometimes almost undetectable, music ties the events of my life together.”

The dark theme of the new album Rites of Love and Reverence was first disclosed in the post-synthwave style of Coven. “This is a piece which seemed to write itself, flowing almost effortlessly from some unexplainable source,” said GOST.

“This song is told from the perspective of a persecuted witch who is proud of her Coven and will die before she betrays her sisters. In memory of the many victims throughout history, by which mere accusations of witchcraft condemned the innocent to death.”

Rites of Love and Reverence is out on Friday 13 August, through Century Media. Pre-orders are available from gost.lnk.to/RitesOfLoveAndReverenceID 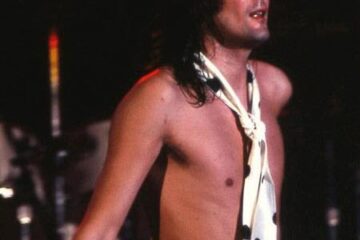