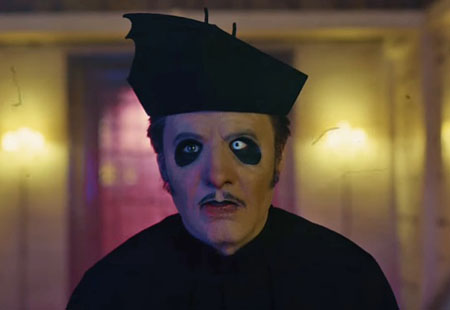 Ghost have unveiled the new Papa in a three-minute video clip which you can see here.

The last Papa, Papa Emeritus III, was forcibly taken from the stage during the final show of the band’s ‘Meliora”‘ tour last year, with Papa Zero arriving to announce the beginning of ‘The Middle Ages’. All the Papas, other than the elder Zero, are the same man, Ghost founder and vocalist Tobias Forge.

The band’s new leader is Cardinal Copia and is not a part of the Papa Emeritus bloodline. The new Papa has heterochromia iridum, a condition where the iris of one eye is a different colour than the other.

The new Papa will make his live debut on May 5th when Ghost kick off the ‘Rats On The Road’ North American tour in Riverside, California. The tour is in support of Ghost’s fourth studio album, which is tentatively due in June via Loma Vista Recordings. The first single, ‘Rats’, is expected to premiere later this month.

“It is loosely themed around the concept of death and doom. It’s a themed album around medieval times, but it’s definitely clinging onto a lot of very current things.

“The Black Death is a great example of a turning point for a whole civilization. Complete villages were annihilated. Most people knew very little, so all of it was God or the Devil — and about their faith being questioned: Why are we being stricken down by this great scourge? It must be because of our not fearing God enough and all this superstitious bullshit.

“There’s a lot that you would recognize today in online mannerisms. In many ways, we’ve gone back a few steps because now it’s closer to how it was back in the old days when people were standing at the square and all of a sudden, it’s like in Monty Python’s ‘Life Of Brian’: ‘Stone him! Ra! Ra! Ra!’ Public trials are very unsupervised and extremely swift and speak to the most primordial parts of us.”

Forge revealed his true identity last year while responding to a lawsuit filed by four former Ghost members who accused him of cheating them out of their rightful share of the band’s profits.