It has been seven years since Greek Death Metal band Death Courier released their comeback studio album ‘Perimortem’, but they are now ready with their latest offering, ‘Necrotic Verses’ and it is an assault on your senses, showing their fans and hopefully the wider Metal community, that they still have what it takes.

Death Courier deliver the brutality they are known and loved for, with intense over the top riffing and a superb drum battery that is well phrased to complement the guitar work perfectly. Include the harsh vocals that rip through like a rusty saw, then this is what Death Metal is all about.

From the opening, title track, ‘Necrotic Verses’ is an intense onslaught from the offset. Each track is crammed to the gunnels, at times almost too crammed, but it works and this is more or less the intent throughout. However it is a cleverly convoluted track, as are they all, which changes direction slickly at regular intervals and has a superbly sinister drop in the second half that add a very menacing touch. 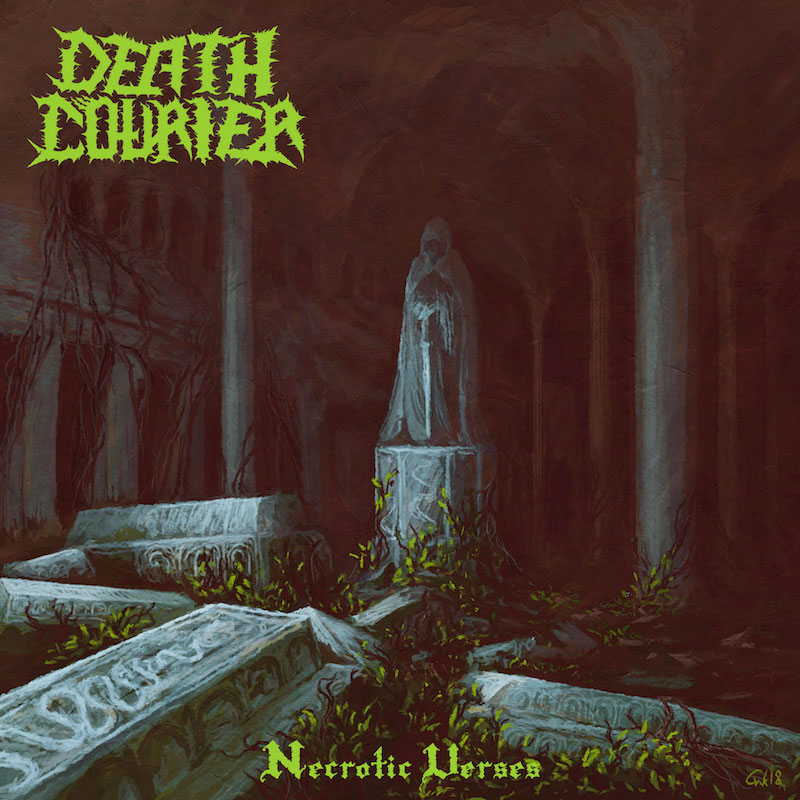 Death Courier keep the almost unrelenting drive interesting with their use of well varied riff patterns. The punchy repeat has an addictive quality on ‘Mourning Ecstasy’, while the addictive reprise that ebbs and flows on ‘As Heaven Blends With Rot’, just rounds the corners off enough to add a very subtle melodic undercurrent, before closing on a beautifully berserk chunk of leadwork.

Another addictive and almost hypnotic riff dominates ‘When Death Fits To Skin’, but you still get that direction switching which holds onto your interest, because even with subsequent listens it continues to surprise you.

Half way through you get the aptly named ‘Interlude’, an intriguing, slightly bizarre but very enjoyable mid-point instrumental.

But it is at this point things get more interesting for me, with the second part definitely my favourite half of the album.

With the slightly slower, but still as intensely packed with riffs, ‘Pillars Of Murk’ has a quirky haunting repetition that lifts the track, with second half lead work which lifts it further. ‘Morsimon Imar’ is short, sharp and rapidly intense and packing a sinister, dark punch.

‘Immune To Burial’ is in a similar vein, but with a bit of direction switching and tempo shifting, elevating to some excellent lead work in the second half.

Then there is ‘Visceral Slice’ with its hypnotic rapid repeat riff, which has an almost theatrical quality from midway onwards. I almost expected someone to shout “Look out! He’s behind you!”.

Finally the six minute juggernaut ‘Remnants’ is beautifully sinister to open and thanks to its extra duration, this is stretched out with theatrical finesse, developing into an ominous track with an unnervingly good repeat riff. A haunting drop in pace that builds up, pauses with poignancy and drops again to sinister lead elements, that become the only remaining haunting remnant left.

‘Necrotic Verses’ is available from Transcending Obscurity Records from 5 June 2020.

FM Continue their rich vein of form with 'Synchronized'