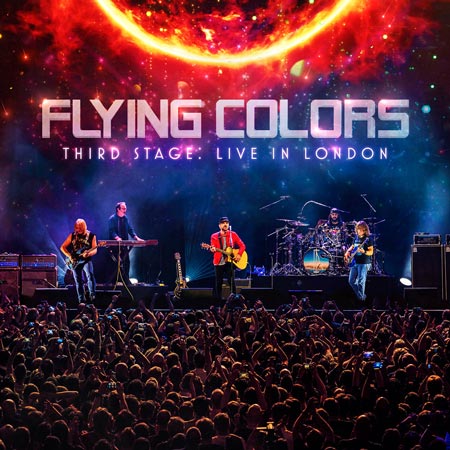 Recorded on 14 December 2019 at the historic Shepherd’s Bush Empire in London, the performance was the last of a nine date tour and the live album features the fifteen tracks taken from their three studio albums which were played that night.

During the performance Portnoy told the audience: “Welcome to the rarest of all sightings, rarer than a UFO sighting, rarer than a sasquatch sighting. A Flying Colors sighting, here on stage in London.

“This is a very sad night for us because it is the last night of the tour and we don’t get to play together enough, so we’re going to savour every moment tonight and enjoy each and every moment here on stage.”

Casey McPherson has fond memories of that evening, telling MetalTalk: “I remember how I felt right before the show in London. I was excited because my oldest daughter and her grandmother were there, whom I love dearly, and it felt like I had the show down by then.

“It’s always a good feeling to take the stage when the material is ingrained enough to just let go and let it out!”

The Empire is a cracking venue, full of incredible stying and has a music history dating back to 1903.

It certainly impresses McPherson, as he told us: “The Shepherd’s Bush Empire is a classic theatre. Little nooks and crannies backstage, and that ornate vibe in the hall. Great people to work with which always makes for a fun gig,”

“Playing in Flying Colors is like being in a movie,” says McPherson. “It’s so incredibly powerful emotionally, and to think this was going to be the last show was a bittersweet feeling.

“I love the other guys in the band and we always have such a good time on the road together. Our Chemistry is like really good sushi. There’s not one ingredient you could replace and it taste that good. It is one of the kindest and uniquely unified band’s I’ve ever been in.”

And ‘Third Stage: Live In London’ captures the band in all their uncompromising glory,

The album will be released on several formats including, Orange transparent 3LP, Blu-ray, digitally, 2CD/DVD and a 40-page Earbook which includes 5 discs; 2CD album, 2DVDs and a Blu-ray.

The Blu-ray and DVDs in the Earbook also include bonus material of music videos and concert footage of their Morsefest 2019 performance in Cross Plains, Tennessee.

Previous article
Stryper / Giving “hope, inspiration and a light in the darkest of times”
Next article
Best Metal Songs for Working Out