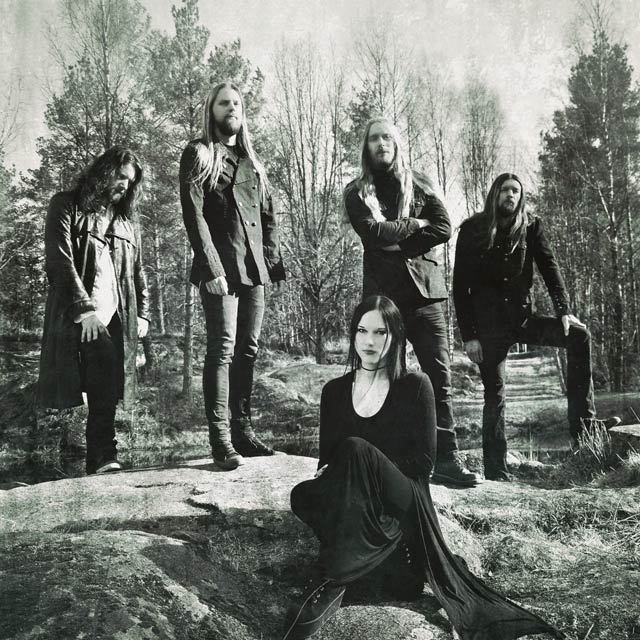 Life rarely seems to run smoothly for Swedish gothic doomsters Draconian. Record company issues, line up changes, visa problems, something always seems to be going on around them. Although they recorded their first demo back in 1996, ‘Under A Godless Veil’ is just their seventh full length album to date.

Their sixth album, the superb ‘Sovran’, was the first to feature Heike Langhans on vocals alongside Anders Jacobsson and the five years since that inspired choice has left their fan base, The Draconian Horde, desperate to hear more.

This release feels like a bit of an event! 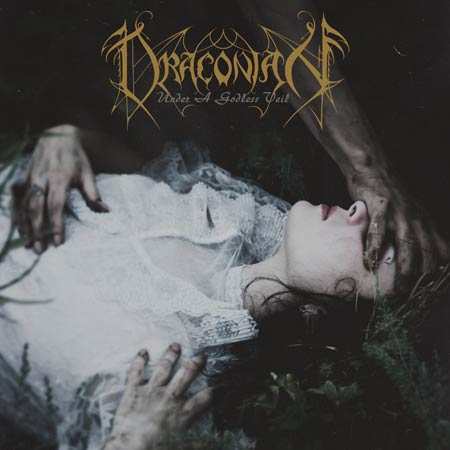 Draconian, despite their doomy, gothic leanings have always made music full of melody and ‘Sovran’, while maybe their heaviest album, balanced those two dynamics beautifully. This follow up is a more restrained affair in comparison. Jacobbson has said they were looking to make something subtler, yet darker and with more depth.

I’ll admit to feeling slightly disappointed on first listen as I loved the sound on ‘Sovran’, but repeated plays have revealed that depth to me. They say the best albums are the ones that grow on you!

MetalTalk spoke briefly with Ericson to find out a bit more about how the ‘Under The Godless Veil’ concept was formed.

It has been 5 long years since the superb ‘Sovran’. Was it meant to take this long or have there been issues with getting the new album to release?

Johan Ericson: “We did a couple of tours and and then we had to take a break cause of Heike’s visa situation here in Sweden. She was not able to go outside Sweden for shows, so I then started working on new material.

“It was a slow process this time. Me and my family bought a house and sometimes it is hard to juggle family life, full time job and writing music.”

Draconian have always written songs with mystical, spiritual lyrics. What are the lyrical themes and inspirations behind ‘Under A Godless Veil’? Do they refer openly or obliquely to the situation the world is now in, dealing with a pandemic?

“The album was written and completed long before the pandemic now experience. The songs are inspired by ancient Gnostic texts and beliefs.”

How would you compare it with ‘Sovran’ musically?

“I personally feel that this album is more diverse and subtle. Even darker in comparison with Sovran, which I feel is a bit heavier.”

Has it made a big difference now that Heike has been in the band for some time? Has there been an effect on how vocals are used within the song writing?

“Of course, I have learned more and more how her voice works and which range she sounds the best.”

It took a while for Heike to get her visa sorted out so she could do proper tours with the band. Then Covid-19 happened! Has it been frustrating not being able to get out and play some shows? What touring plans do you have?

“I think we managed to make the best of the situation, for those months we were not able to perform outside Sweden, we did a short domestic tour and concentrated on the album instead. For some shows we had a stand in vocalist.”

‘Sorrow Of Sophia’ starts things in an atmospheric, understated fashion, easing you gently into the Draconian world of Gnosticism and mysticism. A world that sees a beautiful mountain meadow as a front, covering the life and death struggles that go on beneath the surface, but also finds a dark beauty within that reality.

The guitars are not quite as heavy but still crunch menacingly. Jacobsson’s growls are not quite as deep and Langhans’ plaintive, mournful voice does not seem quite as prominent in the mix. This is more about finding balance, both in their sound and with their view of the world.

‘The Sacrificial Flame’ is the first time the word epic comes to mind this time around. They can still sound so big, so overwhelming, yet there is a control there which is spellbinding.

‘Sleepwalkers’ is subtler, but no less captivating for that. Heike says “My heartsong of the album. Like a graceful requiem to ourselves, ‘Sleepwalkers’ perfectly encapsulates the sentiments of a lost and weary soul.”

Being lost and weary never sounded so beautiful.

‘Moon Over Sabaoth’ waxes and wanes, tides of dark, complex music rising and falling as they wash over you, crashing in before fading away leaving you with memories of their tingling caress.

Those achingly heartfelt, beautiful vocals from the female half of this beauty and the beast style pairing are highlighted in the gentle atmospheric build of ‘Burial Fields’ and the more guitar focused ‘Night Visitor’, which also showcases another Draconian trademark; simple guitar melody lines which are ALL about the song, no unnecessary showmanship allowed.

All of the various facets which make this band unique are highlighted in the journey through the first nine songs on this album, then finally brought together for a final nine minute closer ‘Ascend Into Darkness’. Drawn into this shadowy, stark, moody, yet beautiful world you just do not want to leave.

This is another tour de force from Draconian.

The addition of Langhans has raised them from very good to great and there really is not anyone doing this kind of deep, dark, gothic tinged Metal any better right now.

‘Under The Godless Veil’ has been worth the long wait.

Hopefully the planned European dates with Nightfall in March will go ahead and lead to more touring, further afield, including the UK.

Darkness has never been more appealing, even in 2020!

Previous article
Silent Skies / One of the most beautiful and seductively shimmering releases of 2020.
Next article
Megadeth / Rust In Peace – the good, the bad and the ugly