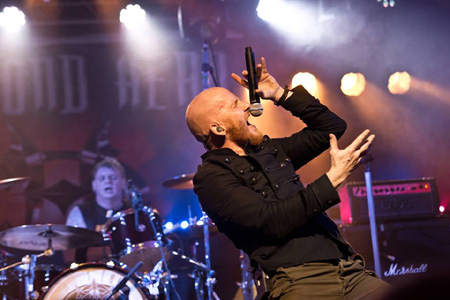 Diamond Head kicked off the first night of their American tour last week in San Francisco, and they were marvelous. Reinvigorated by vocalist Rasmus Bom Andersen (Ras), and lead by the unflaggingly brilliant guitar work of founder Brian Tatler, the band gave a performance that got them a enthusiastic welcome back to the States by a pleased as punch audience.

“Without Diamond Head, none of this would have existed.” ~ Lars Ulrich, Metallica

Brian Tatler has always been incredibly scrupulous about the way Diamond Head has presented itself. While he’s managed to keep the band’s standards very high, it has perhaps come at the price of being acclaimed as one of the most influential acts to come out of the NWOBHM scene in the early 80s, but also an act that has been absent as often as it’s been on the boards. The good news is that this iteration of Diamond Head is as mighty as any that has come before it, and having a relatively new frontman who owes nothing to the past while giving it great respect results in a band that can play old and new songs that seamlessly live together in the new set.

As with many bands of a certain vintage, Diamond Head now sport a combination of players who run the gamut from being present at the creation (Tatler) to a brand new bassist (Dean Ashton). Then there is the brilliant man behind the drums, Karl Wilcox, who has been with the band for nearly twenty of the last twenty-five years. I’ve said it many times in the past, but a great drummer is an essential element in rock’n’roll, and Wilcox is a very underrated sticksman. Musical, powerful, and visual – these are the elements that every kid who picks up a set of sticks should learn.
Rounding things out you have Andy (Abbz) Abberley on second guitar (2006), and the aforementioned Ras out front. They are a very cohesive unit, and a great blend onstage. Again, a testament to Tatler’s unswerving demand for the best he can present for his brand and band.

The setlist was made up of certified Diamond Head classics, four songs off their very impressive new self-titled album, and a couple of deep tracks for the hardcore fans. The great thing is that you cannot identify the old versus the new, unless you know their histories.

The new album opener, ‘Bones’, is a fantastic example that has Tatler riffing in his easily identifiable style, and Ras singing in both a style that suggests that he has certainly done his back catalogue homework, but melodically he’s very much his own man, and a very compelling writer – when this number segues from aggressive riffing into a very smooth and melodic B section, he handles it with the aplomb of a younger Phil Mogg, but with the very accurate vocal gymnastics of a Halford or Dickinson. I use these names as identifiable benchmarks only, Ras sounds like Ras, and he’s one of the best hard rock/Metal vocalists to emerge in this century.

I had a chance to speak briefly with both Tatler and Ras before the band hit the stage, and it’s great to see a lead guitarist and a singer who are both obviously enamored with one another’s talents, and their creative partnership. That this new album is their first as a working unit, it certainly bodes well for the future of this classic British outfit.

Onstage you can actually watch them being musically inspired by one another, and to see the sparks it creates is most impressive as Tatler digs into the chords with even more determination after a particularly powerful line from Ras, and Ras gives it right back after Tatler has torn off a particularly hot lead or riff, and there are many, many moments of great guitar work from one of England’s most underrated players.

Tatler reminds me of a riffier Pete Townshend, in that he’s always about the song, and never relying on his instrument for just flash, or to show his goods.

This gig came to me at the last moment – a sudden realization that Diamond Head was going to be just two-and-a-half hours away, and given the added attraction of it being the first night of a tour, I had to make it happen, and I’m stoked that it did, as it turned out to be one of the best gigs I’ve seen in a year that has literally been an embarrassment of riches in terms of great shows.

Anybody that wants to tell you that rock is dead should be directed to see a Diamond Head show to get their mind right. Rock ain’t near dead, and God bless a band that keeps making itself not just the best it can be, but as good as it’s ever been, and I tip my hat to these guys for being not just a buzz, but an inspiration.

Diamond Head are still going strong across the US, and if they are anywhere near you, get out to the show, you’ll be greatly pleased, this much I can promise you.