His latest album, ‘Empath’, is already acclaimed as one of his most accomplished and challenging. On the surface, it’s a baffling cacophony of styles, melding Tikki-bar reggae, math-Metal grind, Broadway show-tunes, choral symphonies, marching bands and the odd kitchen sink – Messhuggabba, knowing he, knowing you…

However, when listened to in its entirety, there’s cohesion to the chaos and beauty in the bombast, even though it does sound like the product of crazed genius. 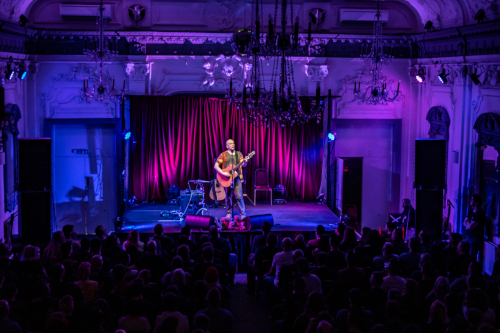 Yet, face-to-face, Townsend is a grounded, humble, family-man with the same foibles and insecurities as his fellow human, despite being encumbered with immeasurable artistic and almost alien musical talent.

Given the all-consuming nature of producing ‘Empath’ emotionally, physically and financially, he’s taking a time-out before he assembles a touring band for the shows already announced for the end of the year. Even so, we’re told not to expect a full performance of the new album this time around.

All of which brings us to the first of two intimate solo shows at this bijou 300 capacity West London venue, where he played songs from across his career and answered audience questions for what was an intriguing and fascinating evening, for both Devy devotees and curious fans of his music. 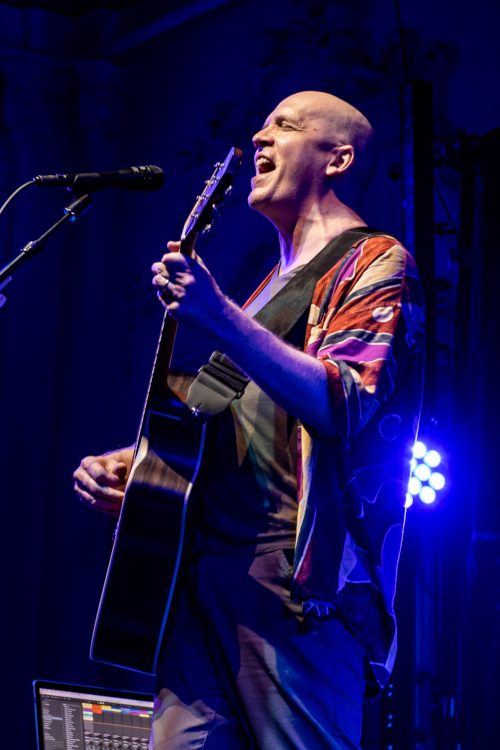 Best of all was to hear the same unearthly voice, unleashed at close-quarters, that had so-bewitched Steve Vai to recruit the then 21-year-old to sing on his ‘Sex & Religion’ album.

From the outset that this show would be out of the ordinary and extraordinary, as Devin tentatively eased his guitar into tune and finessed the setting on this starship sound console as the ethereal ambience of ‘Heart Baby’ flowed into the dreamy ‘Let It Roll’.

The dynamic heartbeat of ‘Funeral’ remained as compelling as the original ‘Ocean Machine’ track, but here, shorn of its closing Tool-meets-the Foo Fighters Metallurgy, it acquired much more than a “spring-clean for the May Queen” with the stripped-back arrangement laying bare the sombre lyrics. Similarly, the dark angst of Strapping’s ‘Love’ was retained in Devin’s vocal, contrasted by the soft yet brooding guitar lines, darkened further by a preface of diabolical flattened fifths. 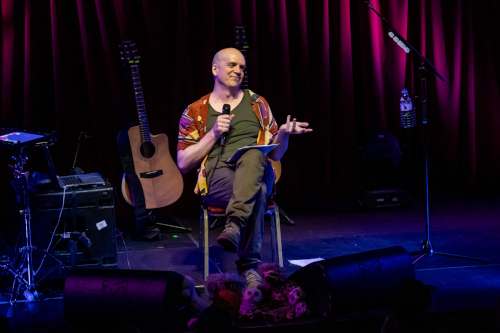 The majestic ‘Deadhead’ was perfectly placed mid-set and, while lacking the muscle of a full-blooded live performance, this served to accentuate Devy’s divine voice, which soared as stratospherically as ever. This was offset by the perfect crossover pop of ‘Ih-Ah’, which had we fortunate few, we the 300 Ih-Ahing in rapture to this Spartan arrangement of this brilliant song.

Throughout the evening, Devin was wonderfully engaging and spoke between songs to provide context and insight, particularly his thoughts on the challenges of parenthood and advancing years, including the succinct statement: “Middle age is a motherfucker”, and how that influences his artfulness, such as his intergalactic puppet creation, ‘Ziltoid The Omniscient’. The script for the evening was that there was no script and the setlist was for guidance only, as the mix of speech and song explored tangental and fascinating avenues, with the discussion about ‘Antiques Roadshow’ particularly memorable.

Yet, it was still the music that dominated with the sparse ‘Terminal’ mesmerising and full of Porcupine Tree style languor and yielded to the hypnotic beat and gorgeous vocal melody of ‘Coast’. 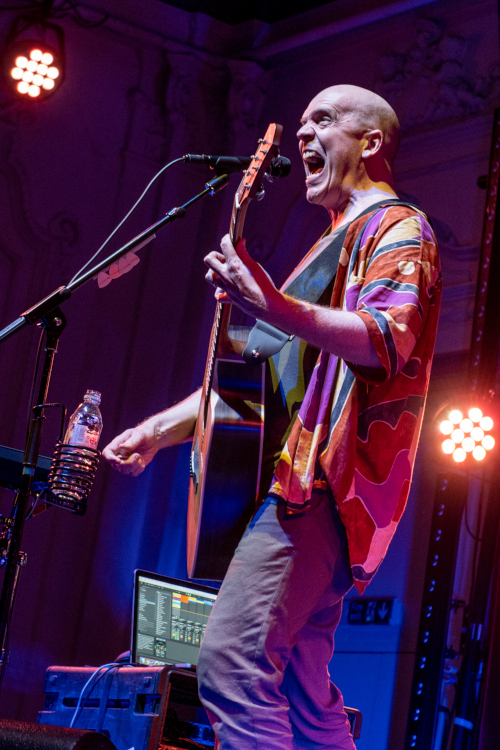 A further perspective on the evening was that it seemed perfectly natural that sharing the stage tonight were a sloth, an owl, a flamingo, a cat and a pineapple, prospective soft-toy companions for Ziltoid, as gifted by fans. This bizarre normality set the scene for the Q&A that followed the break, where wide-ranging topics from his prefered pizza topping (garlic and ‘shroom) to his creative ethos as a ‘happy nihilist’ via the latest status of his long-gestating metaphorical musical about sex and power ‘The Moth’ (still in-flight).

The final musical segment opened with the heartfelt contemplative love-song ‘Divine’, proving the breadth of Townsend’s talent as a writer, particularly when contrasted with the earlier cartoon sci-fi of ‘Solar Winds’, where Captain Spectacular seeks to discredit Ziltoid’s façade as the ultimate forth-dimensional guitar hero and coffee lover.

His brilliant unpredictability surfaced in the second half. Having spoken about this eclectic influences and how show-tunes were a key part of his early musical adolescence, he launched into the theatre power ballad to end them all in ‘Bring Him Home’ from the widely cherished musical ‘Les Misérables’. The perfection of his effortless bel canto vocal technique and the vested emotion in his delivery are astonishing, emphasising his boundless and bountiful ability. 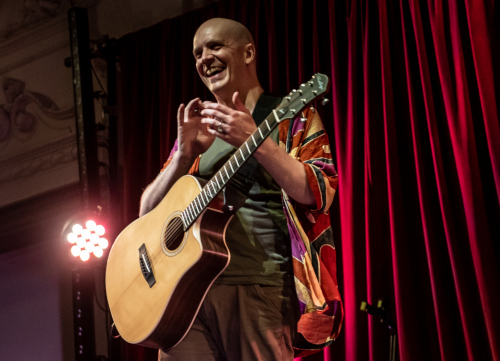 As such, the anthemic and uplifting ‘Life’ was able to bask in the reflected glory of its theatrical predecessor and provided Devin with the latitude to attempt an impromptu and unrehearsed excerpt of ‘Why?’. Tellingly, this was the only part of ‘Empath’ (an album that Townsend states “kicked his arse”) that was performed tonight. For now, he prefers to leave the challenge of replicating the dynamic songs and dense arrangements from that album to one side, until he has recruited a new band that will join him on the tour dates later this year.

This was a perfect evening in the company of this self-declared imperfect perfectionist. Roll-on December and those full-band shows. 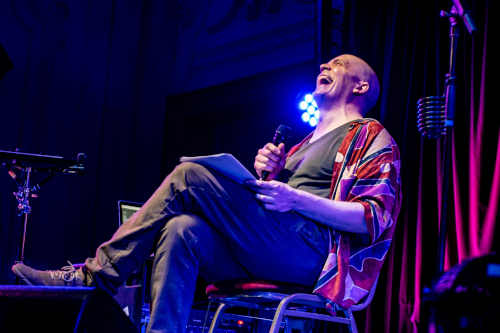 To find out more about ‘Empath’ and much more, watch Andy Rawll’s recent interview with Devin here:

You can also watch the preview tracks from ‘Empath’ right here:

And finally, one of the most amazing live vocal performances you will ever see:

D_DRIVE CO-FOUNDER SEIJI: "YOU CAN LISTEN, SEE AND FEEL THE MUSIC 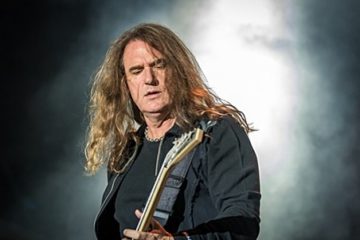