Black Sabbath have continued their super deluxe boxset releases with Sabotage, and MetalTalk has a CD boxset to give away.

Black Sabbath began working on their sixth album in February 1975 at Morgan Studios in Willesden. Tensions within the band were rising, and they were in the middle of a year-long legal battle to free themselves from their manager, Patrick Meehan.

According to Geezer Butler, the name of the album was chosen as they felt like they were being sabotaged.

“We never had more than a grand in the bank,” Geezer has said. ​”Any time we needed money, we had to ask the manager to send us some.”

However, they were able to channel the pressures of constant touring, drug consumption, business pressures, legal annoyances and the cracks of creative tension to produce something powerful and creatively stunning.

Symptom of the Universe was driving and sinister Heavy Metal, Megalomania has their dark rock augmented with piano and strings, and Supertzar, which was the 1975 US Tour opener, is a four-minute dramatic instrumental.

Ozzy said he could not improve Tony Iommi’s Supertzar riffs by singing over them. On the remastered version, which is part of the deluxe boxset, the version of this track sounds so much larger than it ever has. The English Chamber Choir sound massive, and you can hear that Orchestral Harp from the studio in the quieter moments. A big nod to Andy Pearce and Matt Wortham for their approach to the remastering.

The highlight of this boxset is the inclusion of a complete 16-track live show recorded 5 August 1975, a week after the album’s release, at the Convention Hall in Asbury Park, New Jersey.

The power of these songs live is impressive, and this version of the live show is the highest quality audio we’ve come across. It really is the nearest you can come to a live ’70s Sabbath experience without owning a time machine.

Sabbath returned to England for a tour in October 1975. A neon sign outside the Hammersmith Odeon read, “Britain’s premier heavy metal band – Black Sabbath”. A report from that concert said that you could substitute “premier” for “world’s” – there is just nobody around to touch them.

The deluxe boxset includes a copy of the Japanese Am I Going Insane (Radio) b/w Hole In The Sky single. There are no alternate takes of the tracks on Sabotage, but this does allow one to focus on the remixed version, with is essential listening.

And, once again, the detailed book which accompanies the boxset is a fascinating insight into the band’s mind and how they were featured in the press at the time.

It has been over four and a half decades since Sabotage was originally released. With this boxset, you really get to appreciate what a fantastic album this is.

To win a copy of the CD Boxset, send an email to comp@metaltalk.net. Don’t forget to put Black Sabbath in the subject. The winner will be picked on 28 July. Sorry, UK only.

The Sabotage Super Deluxe boxset can be purchased from blacksabbathband.lnk.to/sabotagedlxPR. Available on CD or Vinyl LP. 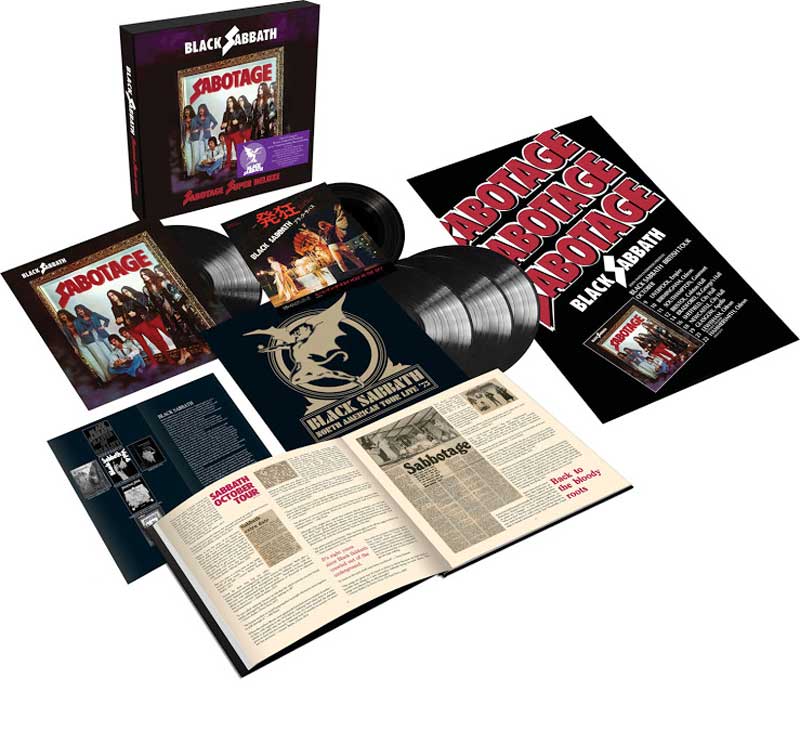