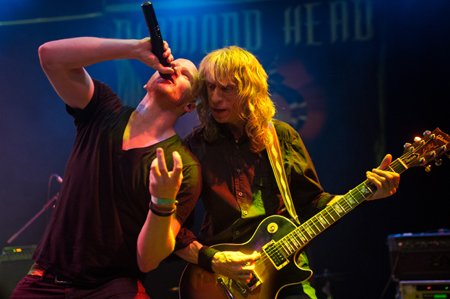 It’s Diamond Head’s last weekend on home shores before they set off for their biggest North American tour ever. The band fly to the States on Tuesday and play their first gig on Wednesday night at Slims in San Franciso.

Diamond Head have, of course, been to the States a few times before but they’ve never had a tour as extensive as this before and Brian is clearly geared up for it.

“It’s our longest tour to date, and I am looking forward to it but naturally concerned for my health. I don’t want to fall ill. It’s very different when you’re 21 but at 56 everything is harder (well, not everything).

“People sometimes say ‘The Rolling Stones are still going and Mick Jagger is 70’, and that is true but I doubt he has to travel to all the gigs in a van with the gear in the back and set it all up himself then sleep in a cheap motel.

“Also I bet the Stones no longer do sixteen nights on the trot… Living the dream!

“I will not be taking my precious Gibson Flying V to the States because like me its fragile now and might break. I will instead be taking a very solid, almost indestructible chunk of hard wood in the shape of a Gibson Les Paul Standard.

“The European tour was excellent preparation for this US tour. Diamond Head is a very effective band and I have tweaked our live set many times to reach this latest version. We also have around twelve extra songs that we can bring in and out of the set to mix it up as we proceed.

Drummer Karl Wilcox is a resident of Las Vegas and is looking forward to playing a ‘hometown’ show at the LVCS next Friday night.

“This tour has been very hectic in organizing. This is the longest US run the band has done.

“There’s so much back room stuff to take care of and you hope all your deliveries arrive on time. So when the rest of the guys arrive at San Francisco it’s good to roll.

“Looking forward to playing Las Vegas and showing the guys around the Adult Disneyland. Bravo Delta are on the bill and Roman, their bass player, is a very close friend of mine and the band, so Full Raw, nothing less as always.

“I’ll be playing three cities that I have called my home town on this tour, San Francisco, NYC and finally Las Vegas.”

We also put the following to bass player Dean Ashton:

Dean, this must be a bit of a whirlwind for you? By my reckoning, since you joined the band in August, you have toured the UK and Ireland, and played festivals in Spain, France and Germany, with the US tour just a few days away. This has appeared to have been a seamless transition for the band and you must be really happy with this and the upcoming tour?

“Yeah it’s all happened pretty fast. I first heard about the position at the end of June, then just over a month later I played my first show. When Brian told me I’d got the gig, I was at his house the next day learning the set. I put the hours in at home nailing the tunes.

“All the shows are important, but my second show was Bloodstock, which was a big deal, so I had to be up to speed straight away! The gigs have come thick and fast, which has helped me settle with the boys on and off stage. They’re all ace dudes, so I feel at home already.

“I can’t wait for the tour! I’ve been lucky enough to play the States before, but to be going back and playing an extensive tour as part of the legendary Diamond Head is pretty special. I’m personally looking forward to playing The Whisky, twice!, and the sixteen show run marathon. Nobody likes days off anyway!

Frontman Rasmus Bom Andersen is currently transitting from Australia to England to join the band for the trip to the States so by the time he arrives in America, he will have almost circumvented the globe. Guitarist Andy ‘Abbz’ Abberley was unavailable at the time of writing but we’ll be hearing plenty from him and the rest of the band over this coming month.

So the band are ready. Let’s hope the USA is too as one of Britain’s greatest ever Metal bands are about to bring lightning to the nation.

“We’re a combination of the two heads, Diamond Head and Motörhead. The epic feel is definitely from Diamond Head, while the simplicity came from Motörhead.”
James Hetfield – Metallica

Previous articleARIZONA WELCOMES DIAMOND HEAD: “THANKS FOR GETTING ME THROUGH MY PRISON YEARS”
Next articleDIAMOND HEAD TOUR DIARY: THE FINAL INSTALMENT