Hailing from Reading – no not that one, the Pennsylvanian one, ‘Violent Portraits Of Doomed Escape’ is Black Crown Initiate’s first album for Century Media after two successful albums for eOne. Their sound is most definitely progressive death metal – think early Opeth, Mastadon and Decapitated and you will be in the correct ball park.

A picked acoustic guitar opens the album with the clean vocals of lead guitarist Andy Thomas settling the listen into a false sense of security before ‘Invitation’ bursts into real Metal with a brutal, yet melodic guitar riff and James Dorton’s guttural roar.

It takes balls to open your album with the longest track. Clocking in at 7 minutes 55 seconds, there are plenty of twists and turns to be found. The good news is – none of it sounds forced in any way and, as opening tracks go, it’s a belter. 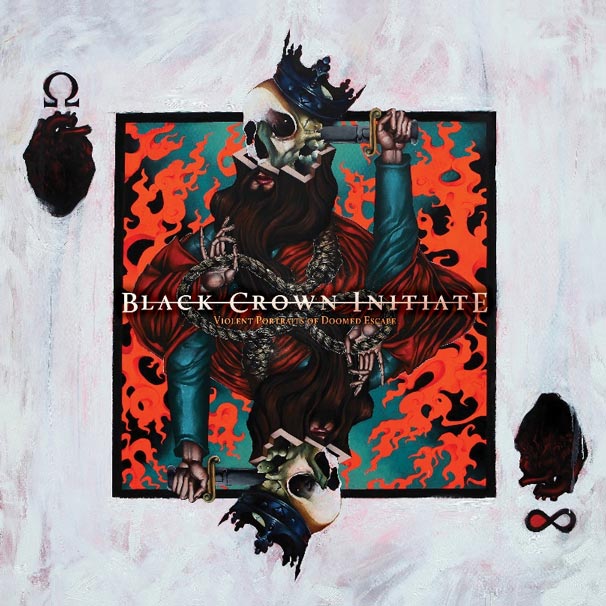 There is only one track on the album that I really don’t get at all. ‘Bellow’ sounds like a cross between Gregorian Monks chanting and a heavily asthmatic bloke snoring. There is no instrumentation on this track at all and, for my ears anyway, it kind of spoils the flow of the album.

‘Death Comes In Reverse’ that follows ‘Bellow’ starts off with a nice clean guitar line and has an almost Pop feel to it. Don’t worry kids, that doesn’t last too long.

This is the kind of track that Opeth used to write before they became a bona-fide prog band.

Black Crown Initiate are no strangers to touring and having their first tour ever supporting Behemoth as an unsigned band shows you just how highly they were rated right at the start of their career. I can’t see someone like Nergal allowing a sub-standard band to tour with Behemoth.

‘Violent Portraits Of Doomed Escape’ proves that Nergal wasn’t wrong – it is an album that is as brutal as it is melodic. It certainly ticked many boxes for me.

Tracks like ‘Years In Frigid Light’ and ‘Holy Science’ play the delicate game of light and shade with a mix of clean guitars and the clean vocals of Andy Thomas mixed with ultra heavy riffing and the joyous roar of James Dorton.

That is not to say that the rhythm section of bassist Nick Shaw and drummer Samuel Santiago are slouches. Far from it. It takes no end of skill to nail the complexity of the music on show here and Ethan McKenna does a sterling job on rhythm guitar.

Of ‘Holy Science’ (see below), the band told us: “We are proud to present to you the animated video for ‘Holy Silence.’ The track itself is the culmination of the story that runs through the album and Dave Brodsky did a fantastic job interpreting the music visually. Enjoy!

This album was a step into the unknown for me, and I’m so glad i took that step.