As Christmas, or what will have to pass for it in this odd year, is finally upon on us, so are some of the more lavish and exciting new box sets and reissues. This has been a bumper year for heavy duty vinyl fans in particular.

‘Aerosmith Rocks Donington’ is a fabulous triple set of hot pink coloured vinyl documenting the bands triumphant headlining set from Download 2014. Housed in a beautifully put together gatefold sleeve with pictures of the band, its sure to delight any lucky Aerosmith fan that Father Christmas manages to reach. 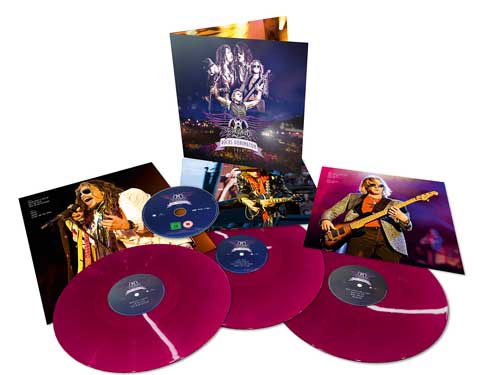 As for the music itself, The Toxic Twins are on absolutely smoking form throughout, with frontman supreme Steven Tyler screaming and dancing his way through an almost two hour set that would surely floor a singer half his age.

Meanwhile Joe Perry is still the cooler than cool dark horse providing the brass knuckle riffs. Indeed the whole band sounds superb and a varied setlist that covers more or less every point between big hits and the deeper cuts.

The set kicks off with the evergreen classic ‘Train Kept A-Rollin’ before a particularly lively ‘Eat The Rich’. Aerosmith are one of those live acts that are so consistently excellent that it is easy to forget just how much fun they are live.

‘Same Old Song and Dance’ sounds more energetic now than it ever has and ends with Joe Perry trying to force feed his Les Paul into his stack of amplifiers. The underrated gem ‘No More No More’ has never sounded better and it leads into a stellar cover of The Beatles ‘Come Together’ which blows their previous studio version out of the water. It is one of the highlights of a brilliant set.

Starting their encore with the big guns, ‘Dream On’ is followed by an electrifying ‘Sweet Emotion’. After a rousing, crowd led chant of “f**k curfew”, Aerosmith return for their second and final encore ‘Mama Kin’. A perfect ending to a tremendous night.

Hopefully, the world will soon return to a state where Aerosmith can complete their (supposed) farewell tour. Until that time, all Aerosmith fans should enjoy this tremendous set and relive the best of times.

Mike Ross and Verity White swap gender roles for Baby, It's Cold Outside 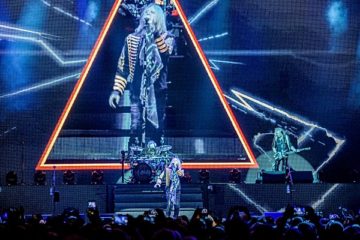