ADRIAN SMITH TO RELEASE AUTOBIOGRAPHY IN 2020 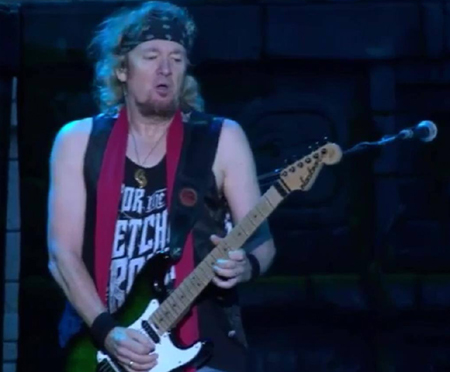 The only details available at this time are Google Play and Waterstones have the 288-page hardback book penciled in for a May 14th 2020 release.

Adrian joined the band in November 1980, replacing Dennis Stratton, and made his studio debut on Maiden’s second album, 1981s ‘Killers’. He left ten years and six superb albums later and rejoined in 1999.

He told the New York Post shortly before Maiden kicked off their current ‘Legacy Of The Beast’ North American tour:

“There’s not that many bands that have been around as long as we have. I left the band in 89, I had a bit of a break, which was great for me. I appreciate every second of it now, but maybe in the 80s it was slightly different.

“I think we really enjoy playing live. It’s hard with the travelling, it’s hard for anybody. It’s unique, the fact that we’ve been together for so long, but I suppose as long as people want to come see us, we’ll keep putting on shows.”

Adrian returned to Maiden with frontman Bruce Dickinson, who said at the time:

“I think everybody was a bit surprised at how much we missed him. I wouldn’t have rejoined Iron Maiden if he wasn’t in the band.”

ADRIAN SMITH TO RELEASE AUTOBIOGRAPHY IN 2020