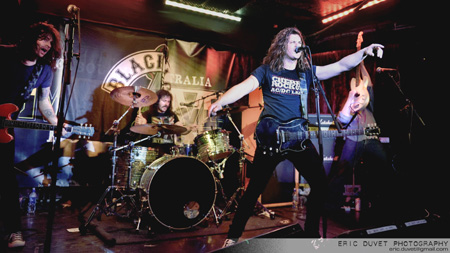 From Bendigo to the Borderline there was a full Aussie invasion last night in London. As we rocked up with the tour’s PR lady, four hairy, hot dudes were loitering outside with takeaway trays packed with mystery meat.

They laughed as I mentioned this and in their casual country boy Aussie accents they stated if they had to rush off stage to the dunnie then that’s why. They only had a fiver each to buy dinner so this was all they could muster in the pricey West End. This is what makes Bendigo four piece Black Aces such a brilliant band to chat to – easy going, down to earth and funny.

Eight years ago I remember having a similar chat with Airbourne and now that they are doing so well it’s great to meet the next breed of Aussie rockers to play London. Joel from Airbourne fully endorses these dudes and is a huge supporter of the Bendigo boys. 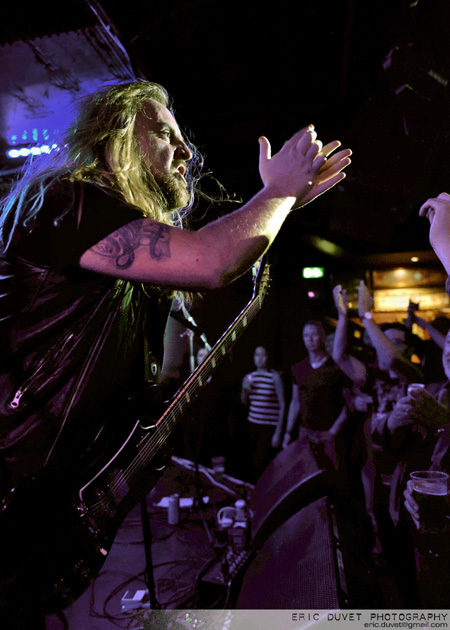 We chat backstage over a beer – but we can’t find their beloved Victoria Bitter that is supposed to be on the rider but the dudes say “no wuckins” and do it in the Cro Bar next door instead.

They’ve come a long way to open for Tequila Mockingbyrd and Massive on this Aussie Wrecking Crew – a European tour bigger than their home country. Halfway into the tour, they are loving the fact that they are playing hot and sweaty clubs and not having to do the hours in a van back in Oz. They are loving life on the road in Europe performing anthem after anthem from their stonking new album ‘Shot In The Dark’ which is a rocking nod to the hard rocking 70s bands of Australia. 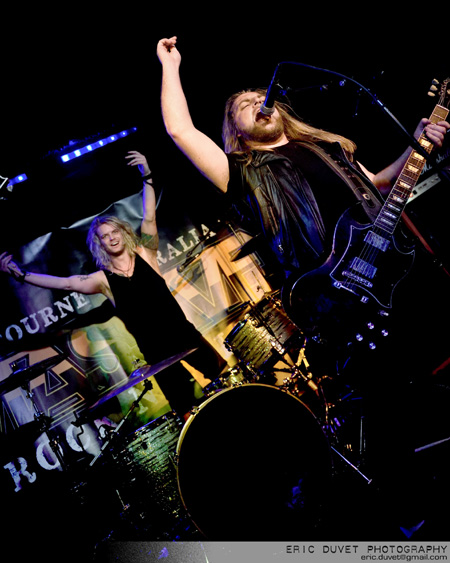 Recorded in just a few days, it’s a belter of a debut. Singer/lead guitarist Tyler Kinder is a heady mix of Bon Scott and Angus and his own talent. He can shake his bum like no other too! The influences are obvious but there is a definite slice of blues injected which comes from the band’s love of old school BB King, Muddy Waters and Howlin’ Wolf.

Move forward two hours and I leave my libation at the Cro Bar and head into a packed Borderline. It’s only 7.30pm but the place is heaving and the crowd are not disappointed. Within seconds of the opening chords of ‘Back On The Chain’, the Borderline was rocking. I’ve never seen so many heads nodding.

And so begins a ten song onslaught of pure balls to the wall rock’n’roll, culminating in ‘Let It Roll’. Drummer Pete rocks the best moustache in the business and his no nonsense drumming is second to none, bassist Alex completes this immense backline with bass and rhythm guitarist Jarrad gives us that two guitar sound that has our chests churning. 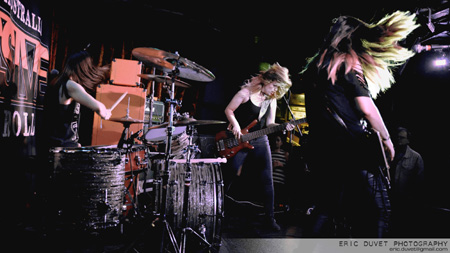 Climbing all over the venue and mixing with the crowd, this band are definitely on the rise. The last time they played here it was at the much missed Intrepid Fox and the band lament the loss of rock’n’roll venues worldwide and encourage us to keep these places alive. This band are so huge I’d love to see them on a much bigger stage, they deserve this, so watch this space Bruce!

Up next are rock chick trio Tequila Mockingbird, formed by two Melbourne ladies, Estelle on vox/guitar, Jess on bass and one limey, Josie the drummer. Hailed by Lizzy Hale as the next big talent, these girls sure can keep up with the boys. Estelle’s vocal talent is vast and how she can play such killer riffs whilst singing her heart out is incredible.

Once again, the crowd are entranced. This performance has it all. A real hint of The Runaways, Velvet Underground, Siouxsie Sioux and Janis Joplin. There’s a heavy mix of punk, rock, blues and pure rock’n’roll. It’s high velocity, melodic, primitive set is polished, probably due to the fact that this band tour a lot. They are one of the hardest working bands in the business and are as tough as they are beautiful. 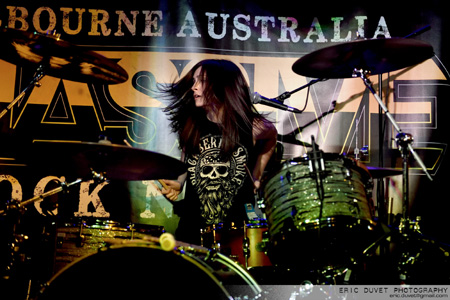 Drummer Josie is teeny tiny and she says laughingly men can’t believe it when they rock up in a huge van and unload a huge kit and backline. Roadies literally stand around mouths open, they laugh. Josie is up there with the huge drumming big hitters. She easily keeps the engine of the band rocking along and as Nicko McBrain from Iron Maiden always states, “drummers are the bollocks of the band,” and Josie certainly is this (without balls though).

Singer/guitarist Estelle is simply sublime and powers us through a mix of songs from the new album ‘Fight And Flight’. They kick the set off with ‘Money Tree’, then ‘Shut Me Down’, ‘Everyone Down’, ‘Catalyst’ and ‘This Ain’t Dead’ which was written at a Machine Head gig and the ladies are thrilled to know that we’ll be getting Phil, Dave and Robb to check the Tequila Mockinbyrds out.

The girls then pay tribute to their punk rock roots in their full throttle version of The Ramones’ ‘Somebody Put Something In My Drink’ which led to them being offered a slot with Richie Ramone on his 2016 Australian Tour. “We’ve played with punk rock royalty, we cannot begin to explain how much of a thrill this was for us!” 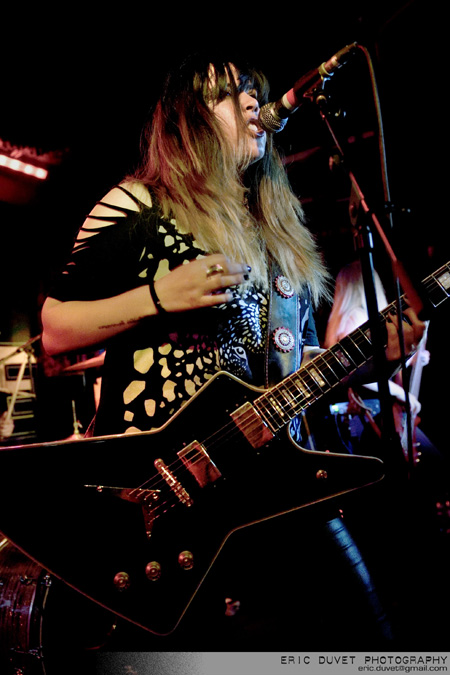 Back to the interview, I ask the band how I can be a T-Byrd as I’m a rock chick too. They smile and say you just need to eat a lot. Well amen to that!

I also ask the girls why they love being in the band and they reply they just love being on the road. They worked full time in normal day jobs to fund this visit but the stage is where they want to be and if I was Lord Sugar, I’d offer them a full time time position as permanent performers as this is what they deserve.

The name was dreamt up by bassist Jess, her thinking being that it would be brilliant if young kids Googled them and their name crops up alongside the classic book and that they were as recognised as this classic piece of literature. That would be a dream come true. I’m sure Harper Lee would be impressed too! 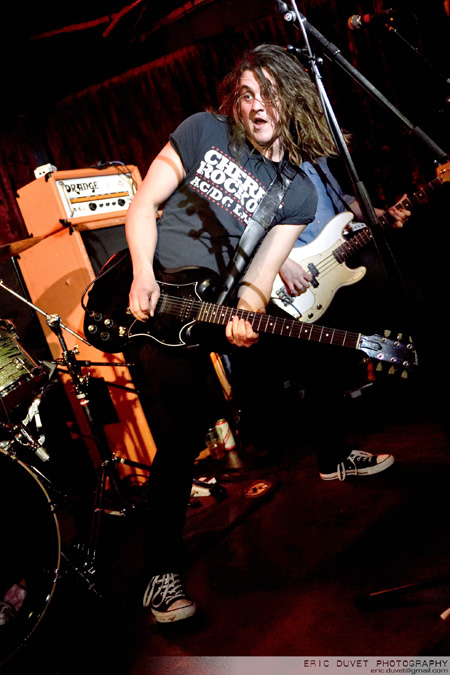 Finally I ask the girls how they like their Tequila? Estelle says straight with lemon and salt all the way, Jess likes it sipped and Josie pulls a face and says “never again” and these days prefers a Jaeger Bomb! From Jaeger Bomb to Cherry Bomb, their explosive set ends with ‘I Smell Rock and Roll’ and the audience go crazy.

There’s a few dates left on this killer Aussie tour so throw a prawn on the barbie, get your budgie smugglers on, break open a tinnie and prepare to get rocked, Aussie style. G’day mates! 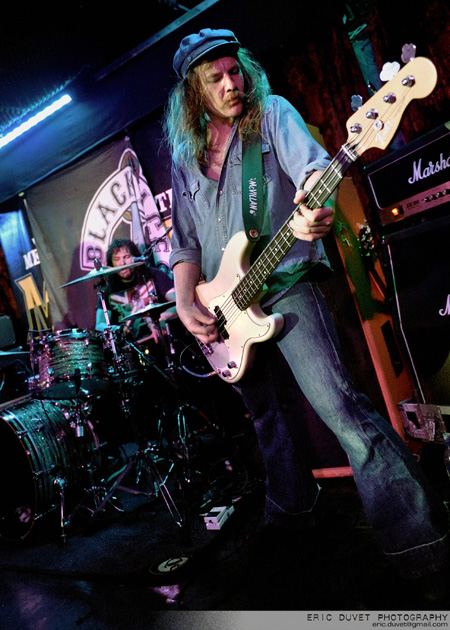