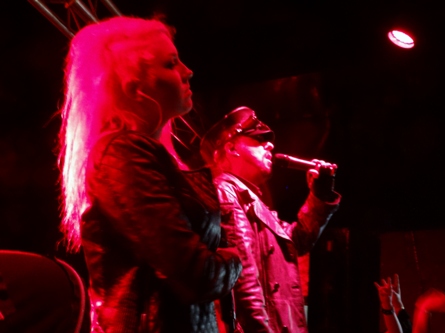 When this gig featuring four touring bands was moved at the last minute to Glasgow’s tiny Audio venue I thought it was ambitious trying to squeeze all those people and equipment into such a small stage. When opening act, Russia’s Imperial Age took to the stage they barely had any room to move around the drumkit.

It didn’t take them long to show however that such minor impediments on a tour can easily be overcome through hard work, effort and a bit of talent.

From the moment keyboard player and singer Alexander Osipov stepped out to the front of the stage and got everyone to clap along with him the crowd were right with them. This was a special show for Osipov as he had lived in Glasgow as a youth and he was spotted outside the venue looking for directions to the nearest chip shop!

However the reason the crowd warmed to the Symphonic Metallers was not any local connection but their effort and their music.

All the usual elements of female fronted Symphonic Metal are there from the operatic vocals of Alexandra Sidorova to the dramatic flourishes and double bass drum-led Power Metal leanings. The Imperial Age twist is having two keyboard players with Jane Odintsova adding her skills to those of Osipov resulting in a sound dominated as much by keys as guitar. 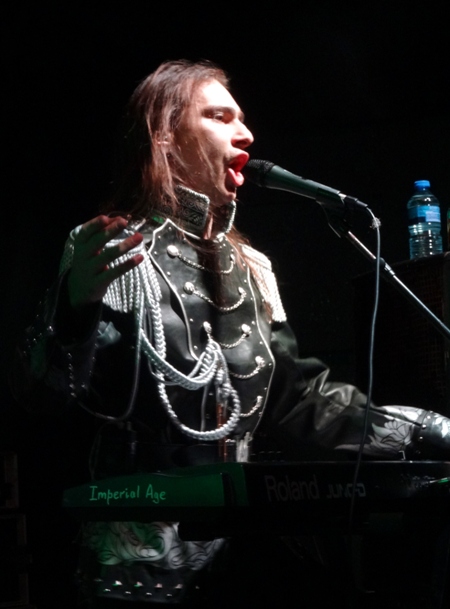 Add in that both keyboard players sometimes step out front to join their front woman in some choral singing and you end up with a kind of Symphonic Metal meets pomp rock vibe which certainly works very well live.

Songs like the epic ‘Turn The Sun Off’ and the fist pumping ‘Death Guard’ cemented them as favourites with the crowd and it was pleasing to see later in the evening that they were doing a brisk trade at the merch stand. Well deserved on this performance and I hope they make it back to Scotland sometime soon but hopefully on a bigger stage. 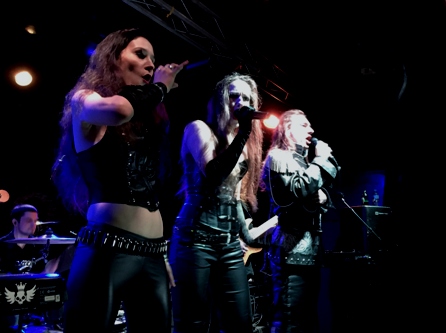 How do you follow that display of pomp and drama? Ego Fall from Inner Mongolia (these days part of China) decided that the way to do it was to have a solo rendition of traditional Mongol strings and throat singing from bass player Chaoluomeng.

When the rest of the band joined him on stage and launched into a Metalcore style high energy attack I thought that was what we were going to get for the rest of the set. There were more surprises in store though as those growling low throat singing techniques were used as backing vocals on some songs plus a traditional wind instrument got some outings too. 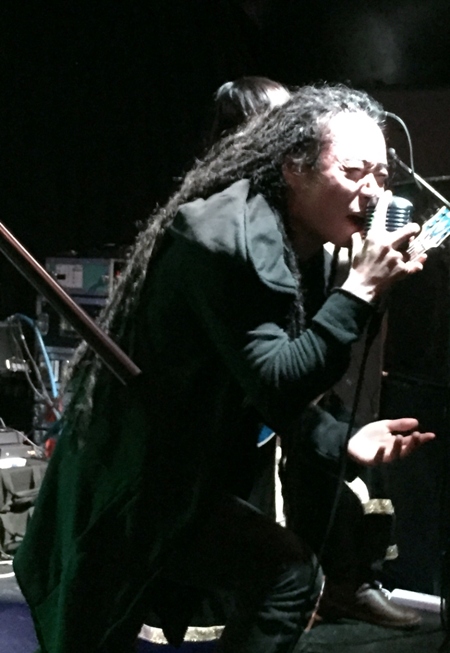 Front man Chao Yu’s shouty vocals aren’t really to my taste but I was enjoying the high energy vibe of it all when they started using electrobeats too. A mix of Metalcore, electronic beats and Mongolian throat singing sounds crazy and it was but somehow it works.

The smiley energetic band members in their flowing robes helped add a nice touch of charisma to it and this was another band which the Glasgow audience embraced warmly. 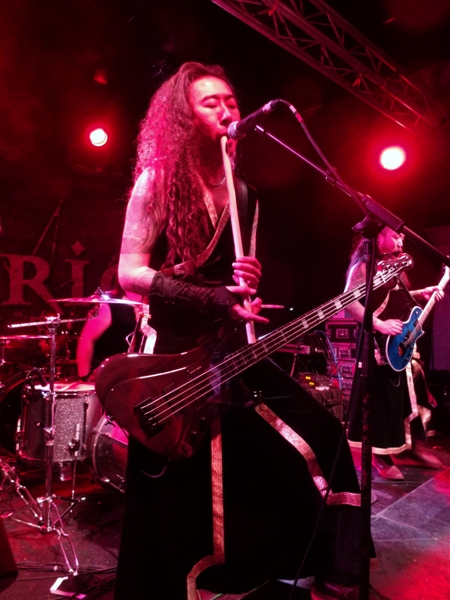 The extra drumkit used by the first two acts was removed from the stage giving Therion offshoot Luciferian Light Orchestra a bit more room to breathe. I wasn’t sure how their trippy, laid back seventies occult groove would work after the high energy output of the first two bands but I needn’t have worried.

While it is a completely different vibe, they do it so well that the audience just fell into that groove along with them.

Singer Mari Karhunen has a strangely detached air during the songs while Therion band members Christian Vidal and Nalle Pahlsson hide behind their masks and pretend we don’t know who they are. Tonight that is all accepted as part of the mysterious vibe the band are trying to create and songs like ‘Eater Of Souls’ and ‘Venus In Flames’ from their debut album are very well received. 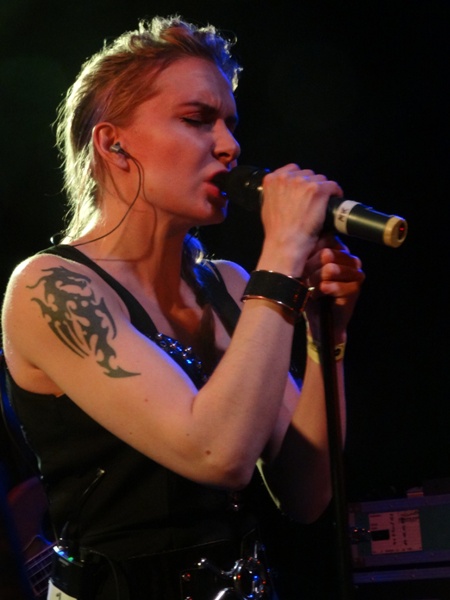 It has to be said that Ms Karhunen’s response to the crowd reaction in between songs was certainly genuine and an indication that this was one of those nights when an intimate venue, quality bands and an enthusiastic audience had clicked into place. I enjoyed LLE enough to buy the album at the merch stand afterwards, obviously a sign I enjoyed their set immensely. 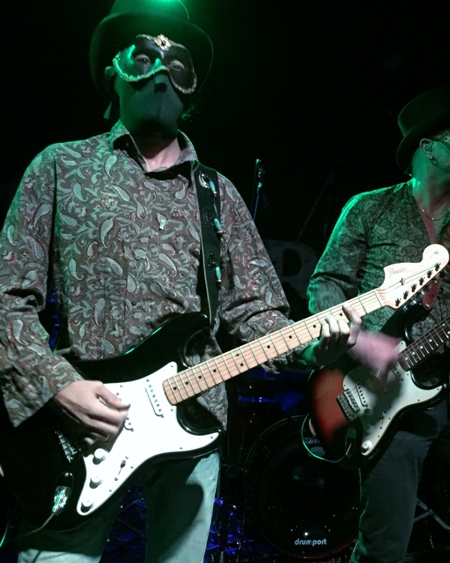 Three of the four Therion shows I had seen prior to this one had been when they were headlining festivals so a chance to see them on such a small stage was one I was looking forward to, probably a lot more than the seven piece band were.

It was a cramped stage when the band launched into old favourite ‘Ginnungagap’ but that wasn’t going to phase them in the slightest. The Swedes’ vocal line up live has slimmed down over the years but their current set up of Thomas Vikstrom and his daughter Linnea’s strong rock voices and new recruit Chiara Malvestiti’s beautiful soprano are more than capable of dealing with anything the band’s back catalogue can throw at them.

With no new album to promote we got a trawl through that back catalogue with over two hours of material from the band. It was a Therion purist’s delight. 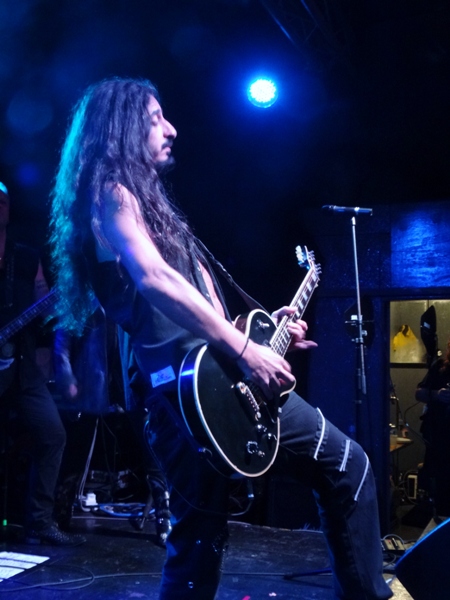 ‘Nifelheim’ let the three singers show how well they can work together in a song showcasing the mad but powerful mixture of opera and Metal that is the essence of Therion. They went right back to the band’s early days with a terrific duet from Thomas and Chiara on the epic balladry of ‘The Beauty In Black’ and then right up to date with another duet in ‘Mon Amour, Mon Ami’, this time involving some over the top acting from Mr Vikstrom and Luciferian Light Orchestra’s Mari Kurhanen in a guest appearance.

The epic qualities of much of their music is matched by the on stage presence of all of the band. Despite the confined space on the stage and the small venue each person was able to stamp their mark on proceedings, from Linnea Vikstrom’s insistence on getting the crowd involved at every opportunity to her dad’s steampunk style dress and imposing persona to guitarist Christian Vidal’s ability to take centre stage with every solo. 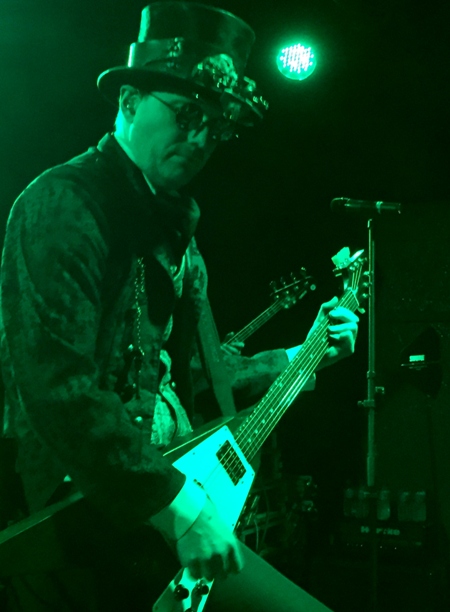 This was Therion’s first show in Glasgow since 1998 and the crowd just loved every minute of it. This seemed to rub off on the band who seemed to be enjoying themselves immensely. When it came time to exit the stage after a set closing finale of a magnificent version of ‘Son Of The Slaves Of Time’, guitarist and band leader Christofer Jonsson grabbed the mike and said he refused to go and squeeze into the venue’s tiny dressing room.

As a result it was straight into the encores of two of their best known tunes, ‘The Rise Of Sodom Of Gomorrah’ and ‘To Mega Therion’ which really ended a fantastic night of music on a high. 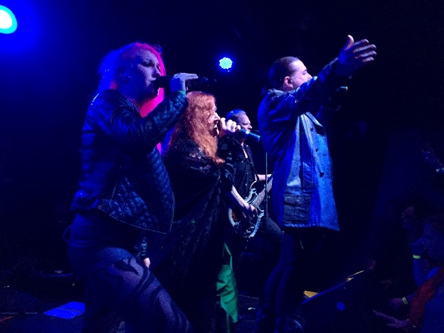 This was just a terrific night of music and a gig that it felt like a privilege to be part of. Four very different bands, all with something to offer overcoming the cramped confines of Audio to entertain a crowd who really responded in kind to them all.

Terrific stuff all round. No separate band ratings are appropriate here for such a great team effort -5 pints to all.