Saturday night in Glasgow and Absolva, who are in the midst of a UK tour to support their ‘Harsh Reality’ single which you can check out below, stopped by for what was not only their first appearance in the city for four years but their very first headline performance in Scotland’s largest city too.

First up on stage were four piece alternative punk band Heart Stalk Lunatic who came from Erskine, just outside Glasgow. Well, except the drummer Jacob Kane who had travelled all the way from London specially for the gig as it turned out – now that’s dedication for you.

The band didn’t take long to get into the spirit of the occasion and despite the relatively small audience, HSL gave a solid performance nonetheless.

A cover of Five Finger Death Punch’s ‘The Bleeding’ sat comfotably amongst original material like ‘Stop Me’ and ‘Another Man’s Lie’ but strangely absent from their set-list was their signature song, ‘Heart Stalk Lunatic’, but it was ‘More Spine Than A Jellyfish’ that shone brightest from their short set. 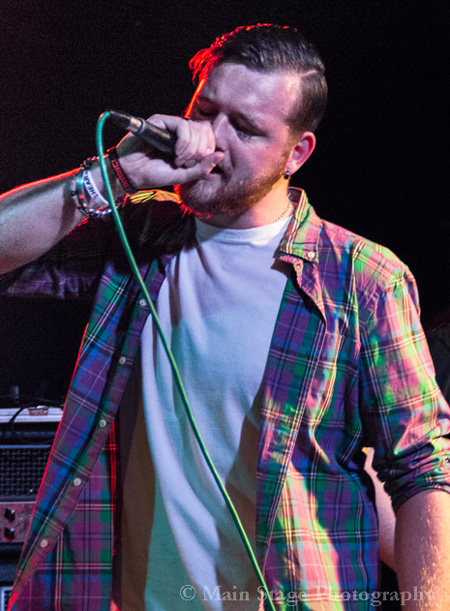 Overall the band did a good job, with frontman Mark Shankland having good stage presence and coming across as an amiable sort of chap whilst Kane certainly has the ability to keep holding the rock steady on drums all night long at the back and making the job look effortless in the process.

Heart Stalk Lunatic Setlist:
Theirs To Take
Stop Me
The Bleeding
Another Man’s Lie
More Spine Than A Jellyfish
Stormchasing

Next up were Damaj from Greenock who are making a name for themselves on the local circuit and I’ve seen them enough times to know that they’re a solid unit who have an impressive catalogue of tracks to their name already. Kicking off with ‘The King’ it’s guitarist James Haggart who takes the lead (literally) with a great guitar solo from the top – it’s just a shame that a guy with a video camera was standing right in front of him so as to obscure the view for most of the audience behind him.

Drummer Scott McLeod took the lead on ‘Testament Of Judas’ with some heavy and precise drumming whilst frontman Daniel Stewart gave a good vocal performance. 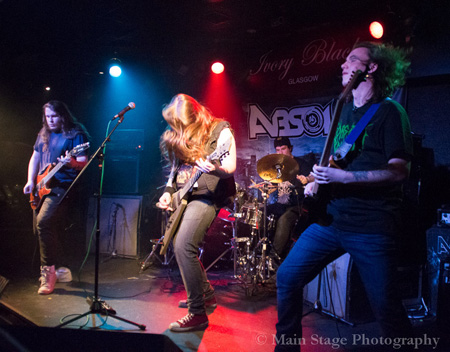 Stewart is a great frontman as he joked with the audience throughout the bands set as well as occasionally stepping up front with a guitar solo of his own. ‘Wrath Of The Tide’ is a slower paced number but it still packs a punch, as does ‘Haggart’ with another show stealing guitar solo.

‘The Well Of Souls’ turned out to be their last number in what was a truncated set due to time constraints but it was clear that the audience were looking for a couple more songs from the band.

With a clutch of headlining gigs coming up in the start of September those wanting to see them again won’t have to wait long and if they continue the way they are, then this band have a very bright future ahead of them.

Damaj Setlist:
The King
Testament Of Judas
Wrath Of The Tide
Inside
The Well Of Souls 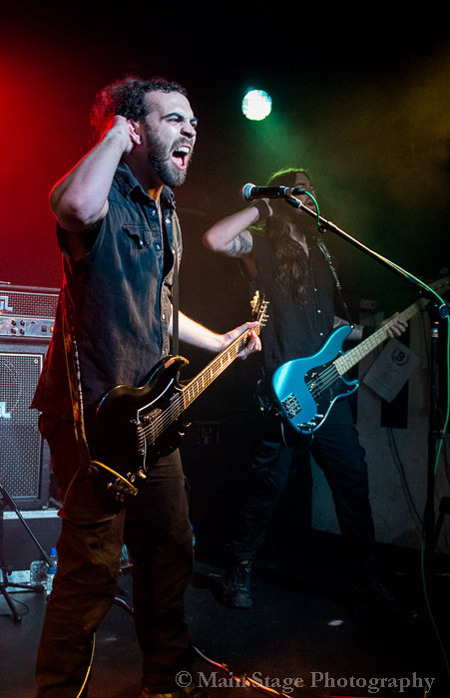 As 9:30pm approached, the stage was set for this historic performance from one of Manchester’s finest, Absolva. More familiar to some punters as Blaze Bayley’s backing band of choice in the UK, Absolva already have three studio albums and these were all plundered to make quite a formidable set.

Their latest album, ‘Never A Good Day To Die’, had three choice cuts included – from the fast paced title track which served as the bands opening number to the slightly slower paced ‘No-One Escapes’ which along with ‘No Tomorrow’ were both placed nearer the middle of the set. From the get-go, the Absolva sound was absolutely faultless with the twin guitars of brothers Chris and Luke Appleton mixed seamlessly together whilst frontman Chris gave an energetic performance throughout their ninety minute set. 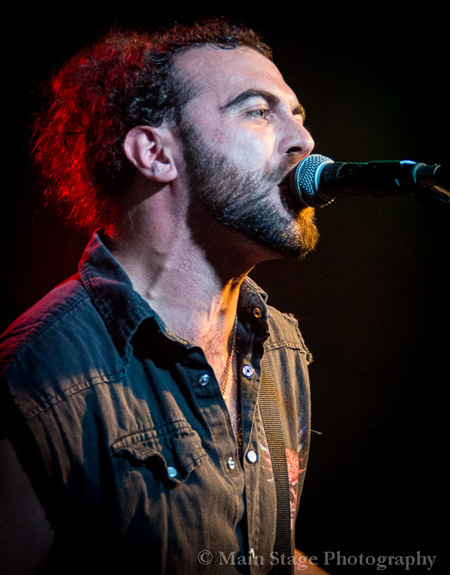 The first batch of songs were also seamlessly performed as the band jumped from one song to the next and ‘Harsh Reality’, which you can have a listen to right here, was squeezed in early in the set and was familiar to some of the audience already as they sang along without needing any encouragement from the band.

In between songs, Chris re-tuned his guitar as the audience waited patiently, with him telling them: “I’ve never heard such a polite crowd before!” to generous laughter all round. 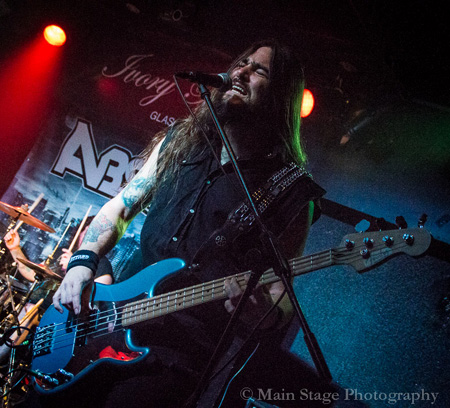 The bands debut album, 2012s ‘Flames Of Justice’, was represented by a number of choice cuts including ‘Hundred Years’, ‘From Beyond The Light’ and ‘ Only When It’s Over’ whilst the title track itself which was left until near the end of the set. Bass player Karl Schramm came into his own during ‘Hundred Years’ whilst ‘From Beyond The Light’ was included at the very last minute as the band were always planning to do something special for their first headline gig in Glasgow.

The move was certainly appreciated by the small but dedicated audience who nodded along to the drum beats laid out by Martin McNee whilst both the Appleton brothers excelled themselves with some theatrics during the guitar solo which brought them plenty of well earned cheers. 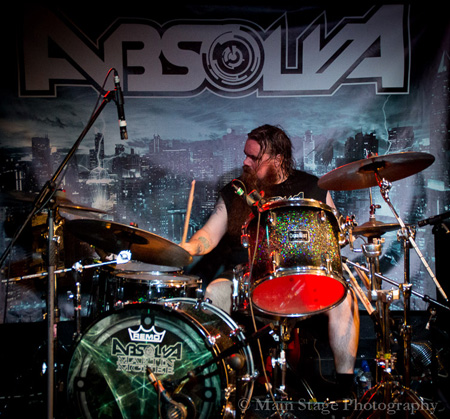 Of course second album ‘Anthems To The Dead’ from 2014 was also represented well. ‘Never Back Down’ had the audience in full “jumping about” mode before ‘Live For The Fight’ for which Chris asked for an “extra five percent of energy” from the audience but was given a whole lot more in return during the barn-storming number. The track was performd astoundingly from start to finish and was a high point of their set – only for it to be slightly spoilt once again by that bloke with the video camera pushing his way to the front before rather unceremoniously shoving it in Chris’ face.

Paying tribute to their influences, the band also managed to add a couple of covers into their set with Iron Maiden’s ‘Fear Of The Dark’ mid-set whilst Black Sabbath’s ‘Heaven And Hell’ was played as an unrehearsed encore after the crowd made so much noise at the end of their regular set that there had to be more. 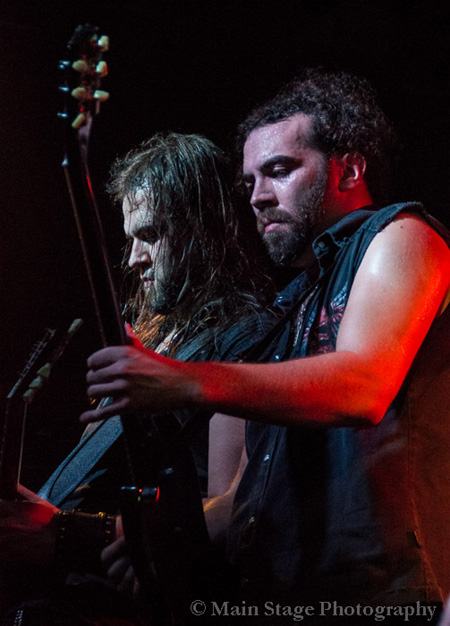 Both tracks saw Absolva giving them their own twist, with ‘Fear Of The Dark’ played at a much faster tempo than Maiden have ever attempted but it gave everyone a chance to sing-along once again and saw them sign off in fine style.

Absolva have the potential to be a huge act and their performance here may have been witnessed by a relatively small audience but they were a dedicated one and it’s people like this who will ensure that Absolva get a warm welcome the next time they returns to the city – and believe me, the fans and the band are already counting down the days until the next time.

Absolva Setlist:
Never A Good Day To Die
Victimiser
Hundred Years
Harsh Reality
No Tomorrow
No-One Escapes
From Beyond The Light
Only When It’s Over
Never Back Down
Live For The Fight
Fear Of The Dark
Taste The Blood
Flames Of Justice
Code Red
Anthems Of The Dead
Heaven And Hell

EXCLUSIVE:IT’S ‘HALLOWED BE THY CLAIM’ FOR IRON MAIDEN AS HIGH COURT CASE IS NOW IN MOTION