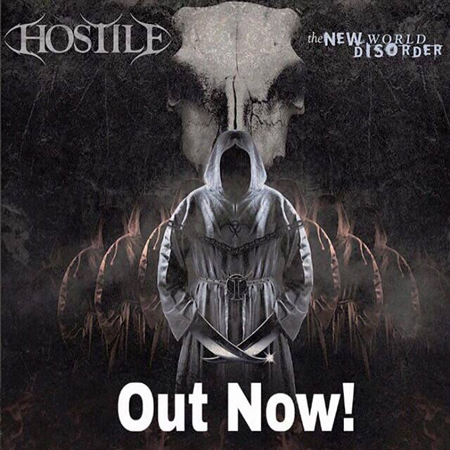 Hostile were formed in 2006 in the Black Country of England (often cited as the birth place of Heavy Metal) by guitarist AJ Mills. They have worked hard over the years bringing their own brand of Metal to an eager audience and have slowly but surely been building their reputation.

Having become something of a regular attraction on the UK live circuit thanks to support slots with Soulfly, Cavalera Conspiracy, Morbid Angel and many others as well as appearing on the bill at the prestigious Download festival.

The band also caught the eye of one KK Downing, one of the founder members of Metal legends Judas Priest, who not only agreed to produce the band’s debut album at The Old Smithy studios (where Judas Priest recorded their ‘Angel Of Retribution’ and ‘Nostradamus’ albums) but also co-wrote a track with the band – the first time Downing’s done so outside of Priest.

The eventual album, ‘Eve Of Destruction’, was released in 2011 to great response from fans and critics alike showing that Hostile’s Heavy Metal journey was well as truly underway.

Fast forward to now and the band are ecstatic to unveil their latest album, ‘New World Disorder’, which once again sees Downing behind the control desk but shows how much the band themselves have matured in the intervening time.

The album opens with ‘Lamb To The Slaughter’ which features a slow lyrical guitar opening things up before the main crushing riff comes in like a hammer. There’s a strong vocal performance from front man Jay Mills who really stretches his voice as he holds the long notes well and his tone doesn’t waver at all. The track itself is more of a mid-paced number although it still rattles along at a fair pace. The guitar solo is something else however, as it takes its time in the beginning before ramping up the pace as both guitarists show their skills early on.

‘All Seeing’ has drummer Steve Clarke setting out the tempo as this fast paced number gets going. There’s another great guitar riff here and the twin guitars of AJ Mills and Ben Evans sound so great together, creating a solid base for the track. The chorus may be on the simple side at times but it’s damn catchy and you’ll find yourself singing along after only a few listens, I guarantee. This track supplanted itself as a favourite of mine early on and gets better and better with every subsequent listen – a really good job all round.

Next up is ‘Freedom Act’, which has a much slower intro before the pace picks up as Clarke once again leads the way. He has a simple technique at times but the sheer power of his performance really becomes the backbone for a lot of these tracks. The guitar riff is intermittent throughout and Jay Mills once again gives the song everything he’s got in a passionate and well performed vocal.

There’s nothing laid back about ‘To Your Knees’ with a pulsating guitar riff setting this track off. The guitar solos here are the stars though as each guitarist showcases their incredible talent. Not content to contain them within one section of the track, they’re literally scattered throughout the song and never fail to impress in what is another very good effort.

‘Ego’ sets out a cracking pace from the get-go once again with the vocals placed towards the back of the mix instead of being at the forefront like some of the other tracks, which in turn allows the guitar and drums equal exposure. Once again, Jay Mills puts in an astounding vocal performance on this fast paced number really stretching himself and showing no lack of passion. The guitar solos too are technical and well played before joining forces towards the middle of the song to batter the listener into submission before the guitar solos start in earnest.

The final original track is ‘Diementia’ which neatly sums up everything this band are about – brutal music and aggressive vocals that occasionally give way to a softer sound but all the while maintaining a conviction about what they are doing – good old fashioned Heavy metal which also has a modern sound to it.

Downing’s production certainly adds something special to the album but at the end of the day these boys know how to write a solid tune or six and are more than capable musicians to bring the very best out of each other. They’ve added a cover of Priest’s ‘Blood Stained’ (originally released on the 1997 ‘Jugulator’ album) on at the end here, which is a nice touch and a great cover (albeit a slightly left-field choice), but they have their own songs which are more than strong enough to stand up on their own and that bodes very well for Hostile’s future. 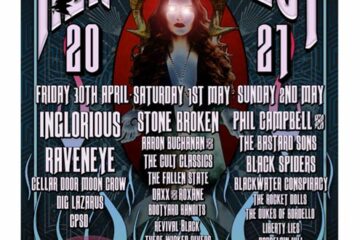