As has been well publicised since it was first announced, this tour was billed as ‘A Farewell To Accept’, as it was to be the final time that Udo will ever play the classics from his former band, the group that he became famous for and with, however on this showing I would say it is highly unlikely that we have heard him play ‘Metal Heart’, ‘Fast As A Shark, ‘Balls To The Wall’ ‘and ‘Restless And Wild’ for the last time.

Udo talks frankly and sincerely about his time with Accept in our video interview which we will be publishing next week and has already said that if this tour continues to be a success then it could well get extended in to 2017.

When we saw U.D.O. in the same venue in April last year – his first visit to England for 16 years – it was a Saturday night and it was far from sold out, however tonight was a Tuesday and the place was absolutely packed solid. Make of that what you will.

Having a great support band helps and tonight there were two, one very well known who obviously helped swell the numbers and one who are relative newcomers but I.C.O.N. made a mockery of that “label” tonight as they stormed the Academy with a set that every Metal fan should check out.

I.C.O.N.’s second album ‘The Blacklist’, the follow up to 2009s ‘New Born Lie’ debut, was released in June 2015 and it has seen the band get signed, tour in ten different countries and play as special guests to Breed 77, Anvil, Geoff Tate And Operation: Mindcrime, Dirkschneider and many more.

It’s easy to see why when you hear great, meaty tracks like ‘Feeding The Negative’, ‘Devil’s Blacklist’, ‘New Born Lie’ and ‘Drowning In Their Screams’ and it’s also easy to see why this band of north-westerners have been tipped for the top. Catch them when you can because you sure as hell will not be disappointed. 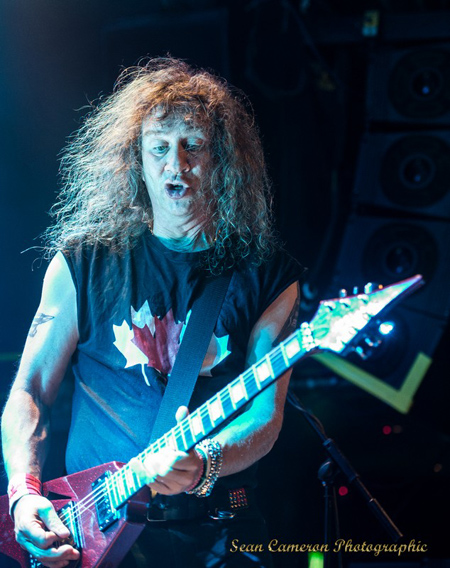 There’s always a buzz when the mighty Anvil are in town and tonight was absolutely no different. They’re rock n’ roll’s greatest “against all odds” story and the absolute embodiment of all that we stand for in terms of triumph in the face of adversity and that oh so very rock n’ roll spirit of never, ever giving in.

We all know the story by now – it’s eight years since the release of ‘Anvil! The Story Of Anvil’, the movie that finally provided the Canadians with their “big break” – and they are regular fixtures on the touring and festival circuit now and always a pleasure to catch live. 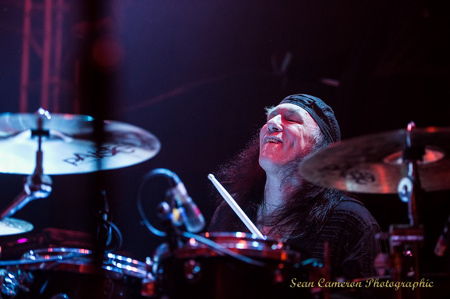 You can see the pleasure etched across Lips’ face when he plays and this time around the band have been given another new lease of life with the addition of new bass player Chris Robertson, their former rehearsal bassist and roadie, who really does fit into the band well. Lips was praising him to high heaven after the gig, clearly terrifically excited about this latest, and hopefully final, addition to the band.

All in all, this was a tremendous performance that bettered all previous times I have seen them (I think I am closing in on double figures now) and the reception that ‘Die For A Lie’, a new song from latest album ‘Anvil Is Anvil’, received made it clear that Anvil retain major support in the UK and are still moving forward with no intention of living off past glories. 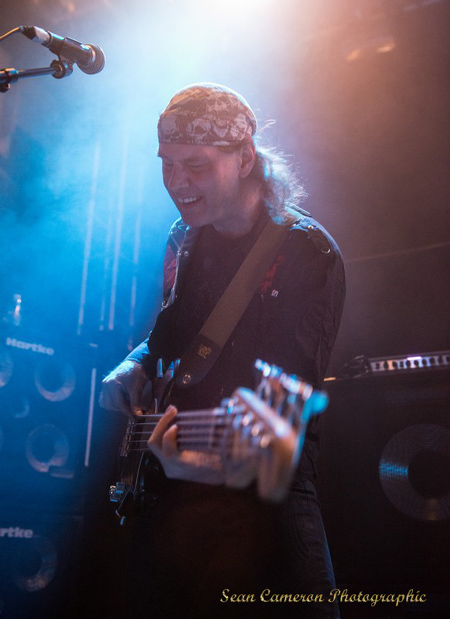 Drum solos are usually the time to head to the bar for refills but Robb Reiner’s four minute blitz before ‘Swing Thing’ was nothing less than captivating. It seemed like every single person in the hall was egging Robb on and he responded with a virtuoso masterclass.

If you’ve never seen Anvil before, catch them later in the year when they return to Blighty for a headline tour because there’s a spirit there that you rarely find these days. If there was ever a band that deserved big success then this is it and somehow I think that there are several more chapters to be written yet.

And so to the star attraction, Herr Udo Dirkschneider, who at 64-years-old is still as energetic and powerful as he ever was. He’s renamed his band from U.D.O. to Dirkschneider now and as mentioned, this was scheduled to be the final time he would be airing Accept classics, which may or may not have had something to do with the superb attendance tonight.

Dirkschneider’s guitar duo of Andrey Smirnov and Kasperi Heikkinen have really gelled since last year and they made these great songs their own, especially Smirnov who displayed a confidence typical of a total master of his craft. He’s more than capable of holding the crowd while the boss has a short breather and he’s got all the licks and riffs off to a total tee.

Udo’s son Sven, who stood in for Saxon while Nigel Glockler was recovering from a brain aneurysm last year is a titanic powerhouse on the drums and bassist Fitty Wienhold is of course the longest standing member of the band, along with Udo himself. It’s a formidable outfit who play far bigger venues than the Academy in mainland Europe and it was a pleasure to see them operate up close tonight.

Especially with that setlist, made up purely of Accept numbers, all of them rousing singalong anthems. Now I’m a big fan of U.D.O.’s albums but they are not as well known and never had the same impact that Accept’s material did and when you take a look at the setlist below, it’s hard to imagine how it can possibly be equalled.

Standout track of the whole night for me was ‘Restless And Wild’ but special mention, apart from the obvious choices in the encores, goes to ‘Midnight Mover’, ‘Midnight Highway’ and ‘Screaming For A Love-Bite’ as well but it’s equally hard to single out any track really as all were played with the passion and ferocity that they demand.

There was no recorded ‘Ein Heller und ein Batzen’ intro to ‘Fast As A Shark’, instead Udo introduced it by singing the now well known tune solo (with a lot of help from the audience) before the song started proper and nearly brought the house down. What an absolute and total classic this track is. A classic amongst classics no less.

The Academy buzzed all night long as one great song followed another and the two hour set seemed much shorter than it actually was, which is always a major indicator that you’ve been at a great, great gig.

Having written this now I am going to be bold and state that no way will this be the last time we ever see Udo play these classic songs because simply put, they are just to good to discard and I am fully expecting to have my balls to the wall once again, sooner rather than later if possible.

Encore:
Metal Heart
I’m A Rebel
Fast As A Shark
Balls To The Wall
Burning