Jutting from the edge of the artistic hub that is London’s West End, Denmark street has long been an ever-evolving entity within London’s bustling music scene.

Dubbed the British “Tin Pan Alley”, the street became populated with music publisher’s offices before a swift turnaround in the 60s that brought a swarm of music shops and recording studios.

In keeping with this theme, The Alley Cat rock bar lies above somewhat hallowed ground. Nestled in the basement of Regent Sounds Studio, the venues topside occupants currently serve to supply custom Fender guitars to both new and experienced musicians.

In it’s history, however, the ground-level floor of the building has been the birthplace of the The Rolling Stones first album, the demo recording of ‘You Really Got Me’ by The Kinks and even Black Sabbath’s ‘Paranoid’. In truth, I can’t really think of anything clever to say to that fact, so I’ll just stick with the tried and tested response; “well fuck me, that’s cool”.

Descending the stairs to the venue and giving a quick nod to the doorman as he presses a wet, inky splodge onto the back of my palm, I can’t help but feel that I’m stepping into a part of Britain’s loud and proud musical history.

Rather fittingly, the night’s festivities brings forth performances from two young, local blues rock acts – The Broken Chords and Dirty Thrills. I’ve arrived early enough to catch the tail end of The Broken Chords sound check, their sharp dress sense and even sharper sound hinting towards a raw, energised performance.

With beer in hand I slump into one of the venue’s sofas to unwind and await the night’s performance.

As the intimate venue fills with fans and fun-seekers, The Broken Chords take to the stage backed by the sounds of eager applause. Sparing no seconds in which to make a good impression, the three-piece launch into an upbeat opening track that grabs the crowd’s attention.

The Broken chords display a highly characteristic and energetic stage presence from the get-go even in spite of a smaller stage area, and the upbeat, feel-good, funk-infused music that blasts from the speakers shows that there’s nothing “broken” about this act.

Lead vocalist and guitarist Joe Finnigan has a look and swagger about him onstage that’s highly engaging, and with a vocal tone akin to Alter Bridge’s Miles Kennedy it’s hard not to enjoy his soulful vocal performance, even if there are a few untamed moments here and there.

Hey, it’s live music, what do you expect? 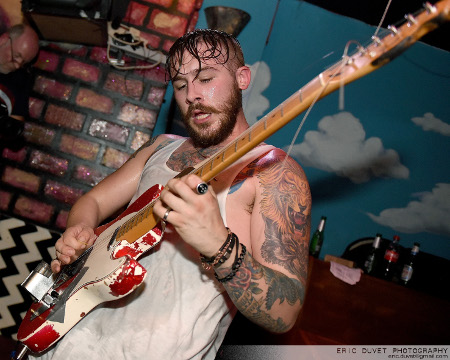 Working together with bassist Aiden Eggenton and drummer Luke Godfrey, the band’s raw and riff-heavy music bleeds through the speakers with well-produced ease, cutting into the crowd and serving as a fantastic warm-up for the night.

There are a few moments where the vocals seem a little buried in the mix, but this doesn’t detract from the overall feeling of the performance and The Broken Chords have put on a good opening performance for the night.

A brief interlude occurs before the arrival of the night’s headline act. Dirty Thrills approach the stage to a round of cheers, whistles and applause – it appears they may have brought one or two friends along with them.

Once again the crowd are presented with a funky, sexy and riff-driven rock and roll sound, and it’s clear that the band have chosen a fantastic venue to hold the night’s performance.

Taking in their music with beer in-hand, it’s hard not to feel like you’ve stepped into a flickering VCR re-run of the late 70s to early 80s. 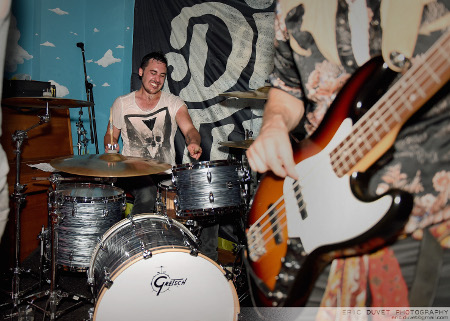 Sadly, the first half of Dirty Thrills set is afflicted with a number of sound issues, and the soulful vocal performance of Louis James don’t seem to find its rightful place in the mix until some way through their set.

Once there, the crowd are presented with an emotionally charged vocal tone and impressive range that wails out the band’s bleeding heart, typically blues rock lyrics.

Bringing out the big guns, Dirty Thrills launch into a performance of ‘Hourglass’, a song that appears on their recent EP release ‘Sweetheart Of The Summer’, and has recently had a video release attached to it.

It’s certainly a crowd favourite along with the edgy, jutting rhythms of ‘Feeling’, and as the crowd belt back the lyrics to both songs, clearly well-versed in the ways of Dirty Thrills, it’s hard not to warm to the four-piece’s raw and catchy sound. 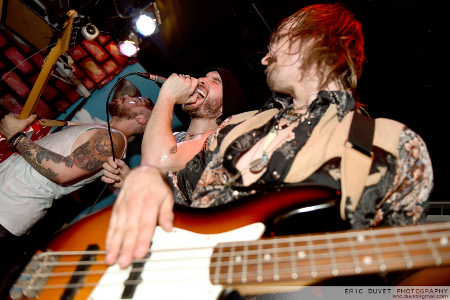 Though perhaps the night’s musical offering at The Alley Cat might not be my first choice of live music to take in, I can’t deny that I’ve had a good time.

The blues rock style performed by both acts may not be in the forefront of commercial music these days, but if these two acts are anything to go by, its underground music scene still thrives and certainly hasn’t been forgotten – or diluted – by any stretch of the imagination.

I applaud Dirty Thrills for their fitting choice of venue; in spite of a slightly cramped stage and crowd area, both bands have managed to put on a good show and work around some slightly hairy technical issues to deliver a slick and memorable performance.

As we’ve already seen, Denmark Street is certainly a special place, and The Alley Cat certainly seems to have welcomed both bands into its history books with open arms. 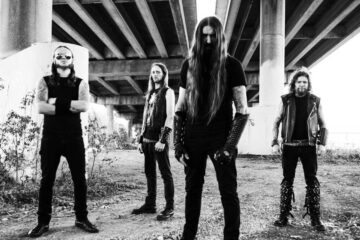