Good news from the Motörhead camp at last – the band’s US tour, which looked in serious jeapardy last week as two gigs were pulled early and others cancelled completely – will continue tonight (Tuesday 8th September 2015) at the Pageant Theatre in St Louis.

The band put out a statement which reads as follows: 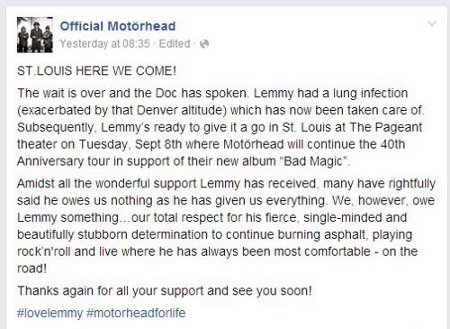 Lemmy walked off stage just a few songs in at Motörhead’s show in Salt Lake City last Thursday and a statement from the band said he had felt unwell due to the altitude.

Motörhead subsequently cancelled the gig at Riot Fest in Denver over the weekend, saying: “The Rocky Mountain High has affected Lemmy like the high altitude of Salt Lake City,” and added that Lemmy “looks forward to the next-up Texas shows… at low elevations.”

Austin, Texas was the first of those shows but the band played three songs – ‘Damage Case’, ‘Stay Clean’ and ‘We Are Motörhead’ and after introducing and starting the next song, ‘Metropolis’, Lemmy let out a sigh and announced: “I can’t do it”, before leaving the stage with the rest of the band.

He returned moments later and apologized to a disappointed but supportive Austin crowd and then the house lights and music came on and concerned (and slightly annoyed) fans started to leave the venue.

Lemmy is 70 in December and there are close to fifty more tour dates booked between now and the end of January 2016. The rock n’ roll legend has suffered several well documented health issues this last couple of years causing the cancellation of a number of the band’s European festival shows and a couple of tours.

The iconic frontman told Kerrang! last week: “I’ve had some health scares and I’ve had to really cut back on smoking and drinking and whatever. But it is what it is. I’ve had a good life, a good run. I do what I do still. I’m sure I’ll die on the road, one way or another.”

Asked if he is afraid of death, Lemmy said, “No.”

And when asked in 2013 if his health issues have made him more aware of his own mortality, Lemmy said: “Death is an inevitability, isn’t it? You become more aware of that when you get to my age. I don’t worry about it. I’m ready for it. When I go, I want to go doing what I do best. If I died tomorrow, I couldn’t complain. It’s been good.”

The new Motörhead album, ‘Bad Magic’, was released on Friday 28th August 2015) and our review is right here.

FLYING COLORS TO RELEASE 'SECOND FLIGHT: LIVE AT THE Z7'