Varg Vikernes has published a six-part story of his arrest and detention in French custody last week for allegedly “plotting a massacre”.

Vikernes and his wife were arrested on July 16th and Vikernes, who spent 21 years in prison for the murder of Mayhem bandmate Euronymous and the arson of churches, has detailed the events in an articulate and fascinating piece.

Vikernes, a vocal neo-Nazi sympathiser, had reportedly received a copy of the manifesto of Anders Behring Breivik, the far-right terrorist responsible for the July 2011 Oslo bombing and Utoeya Massacre which left 77 dead. This is what led to the initial investigation and when Vikernes’ wife legally purchased four rifles, the couple were arrested.

Vikernes posted the following statement on his personal blog, Thuleanperspective.com:

“Thuesday I woke up a bit earlier than I normally do. Yes, I normally wake up because the dog wants to take a leak on our lawn, around 7:00, but this morning I woke up because of a loud bang. I more or less jumped out of bed and saw that somebody was breaking into our home.

“Thankfully I immediately saw that it was actually the police, so I did not reach for any means of defence, and instead just raised my arms and waited for the police to enter. ‘Ah, it’s just the police’. My second thought was ‘What on Earth are they up to? Are they actually smashing our entire entrance area just because of my blog?’

“I was not sure whether or not they were shooting into our living room or actually flashbanging our living room. After a total of three explosiones (that later turned out to be gun shots) and a lot of breaking of glass and door frames they entered.

“My pregnant wife, not yet aware that it was actually the police, tried to cover our youngest son and — she told me later — was about to reach for her 22 LR Browning lever action rifle, when she understood from my reaction that it was the police. Our youngest son, who was sleeping in our bed during that night (because my mother-in-law was visiting), and was therefore directly behind me and in front of the muzzles of the police’s assault rifles.

“Sorry to digress, but some times when you buy underwear you get three underpants in one package, and for some reason at least one of these are always in some horrible colour, and of course I was wearing such a pair of underpants on Thuesday morning. A pair of strikingly orange underpants. Having been repeatedly dragged out into the street or prison hallways or similar in my underwear before, by the Norwegian police or prison guards, I thought to myself that this was going to repeat itself and I would be photographed with my little belly, my thin hair, my tanned arms in great contrast to my pale body and — wearing horribly orange underpants. (Everybody would believe that I was actually Dutch…)

“When I had completed my little intelligent string of thoughts, about orange underpants and everything, the police had climbed the staircase and — simply put — arrested me, laying me face down in the bed with hand cuffs on my back. To my great surprise they also arrested and put hand cuffs on my pregnant wife, leaving my shocked youngest son sitting there alone without his mother’s protection. A whole lot of DCRI police officers in civil clothes arrived and the apparent chief said ‘Yes, that is Vikernes’.

“Now, thankfully my mother-in-law was there, to take care of our children, so I was not so worried about that part. I heard them talking and her trying to calm the children down. I was — to my great surprise — allowed to put on some clothes, I was told that we were suspected of having committed or preparing to commit an act of terrorism, and was held in custody whilst the police in civil clothes went through our things in the office.

“They checked the entire house and the property too with dogs, but — of course — found nothing. They also found all the receipts for all the rifles and ammo, and my wife’s permission to own these firearms.

“They did not take my wife’s hunting magazine, any of our books about camping, our fishing equipment, our first aid books, our cantines, or any other hunting, survivalism or camping equipment.

“After that I was brought back into the living room and saw that my youngest son had thrown up in his grandmother’s arms, and I understood that he was very shaken. The police action was obviously a bit too dramatic for a 3,5 year-old boy. She was trying to comfort him. Apparently things weren’t going so well with the kids after all. His pregnant mother was placed in front of the children on a chair with hand cuffs on, bleeding from her nose.

“Outside there were cars parked all over our front lawn and there were DCRI policemen everywhere. I had a hood placed over my head and was quickly placed inside a car along with half the SWAT team. My wife was placed in the car behind with the other half of the SWAT team.

“The two cars left the property and drove very fast towards the highway, and continued in around 160-170 km per hour on the high way, to Brive. The police professionally maneuvred the car through the traffic, and we arrived safely in Brive. We were both placed in different holding cells.

“Unfortunately my wife was apparently involved too, and my three children were left there to wait for our return.

This is only the very first part of Vikernes’ statement. Head over to Thuleanperspective.com to view Varg’s entire set of ‘Terrorism in France’ blog posts with plenty of pictures. 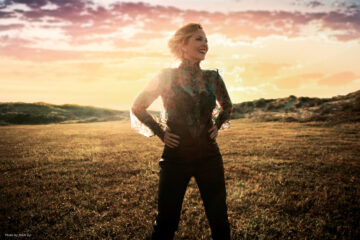