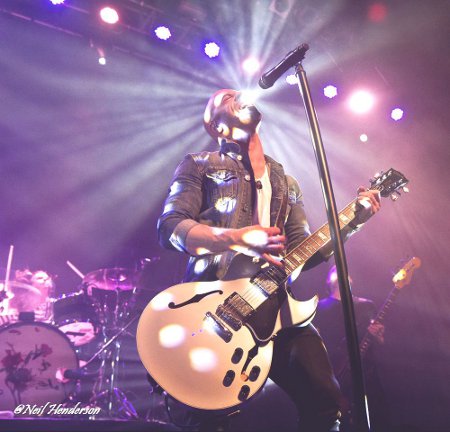 Daughtry, for anyone who isn’t aware, are a US rock band formed by Chris Daughtry who came to public attention by coming fifth in American Idol almost ten years ago.

They have become a great success, selling 20 million albums worldwide with their sub-Nickelback radio friendly rock style, but were accused by Metaltalk’s own Gary Rockulus Clarke of going pop in his review of their latest album ‘Baptized’ and this along with their TV show background made them a slightly controversial choice for a live review.

However I couldn’t resist the chance to witness their first ever show in Scotland so got the go ahead from the powers that be at MetalTalk towers!

After an energetic but pretty unremarkable set from LA based London band Charming Liars, expectations were palpable from a full to it’s 1400 capacity ABC. This show sold out in two days; who knew they were that popular here?

The lights dimmed to a huge roar and we were off and running with the title track of ‘Baptized’. The first thing I noticed is that despite this being set up as a band under the singer’s name a la Bon Jovi this is clearly from the outset Chris Daughtry’s show. He easily dominates the stage and gets all the attention and the five musicians are happy to just to back him up. The second thing I noticed was how good a singer he is. Effortlessly melodic, emotional and on point. 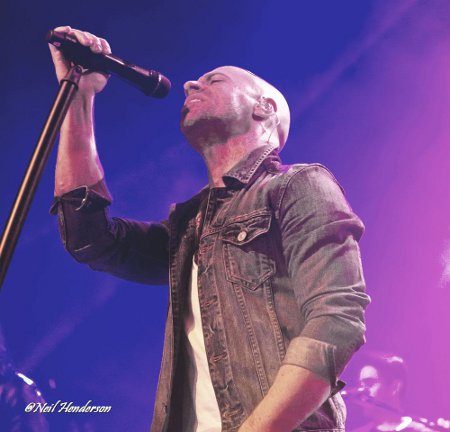 Having some experience of shows in Glasgow I had a feeling that tonight was going to be a good one. Saturday night, a sold out show, the band’s first time in Scotland, I knew the crowd would be up for it and they were.

Asking the crowd to sing along with ‘Crawling Back To You’ the whole band were astounded at the volume of the response and that the crowd went past the requested line and kept going. It was a shame that the moment was spoiled by keyboard player Elvio Fernandes breaking the golden rule of not mentioning football on a UK stage and got booed for comparing the atmosphere to a Glasgow Rangers game. 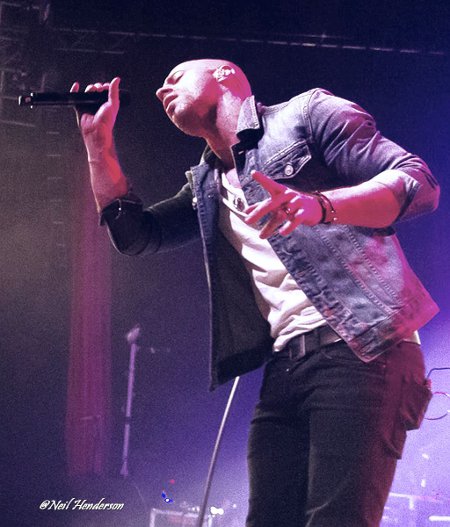 The singalong set the standard for the night as what this band specialise in are anthems with memorable choruses and even the new material such as ‘Battleships’ and ‘Waiting For Superman’ elicited much singing and waving of arms.

The material from all four albums was well received although ‘Traitor’ was probably the weakest song of the set and I could have done without the cover of Phil Collins’ ‘In The Air Tonight’, a step to the mainstream too far even for me. Overall it was the songs from the US multi platinum debut which went down best though, the choruses of ‘It’s Not Over’, ‘Over You’ and the sublime ‘Home’ ringing out to the rafters from the stage and the floor.

After around seventy minutes of mutual adulation ‘September’ made a downbeat, almost poignant end to the main set but in this atmosphere an encore was a given. The song chosen to end the night was ‘Long Live Rock And Roll’ from the new album. It’s strange that a song with lyrics about loving Guns ‘N’ Roses and Van Halen growing up should be an acoustic hoedown stomp but it really worked here with the venue singing as one to the end. It handily brings us to the crux of the matter though which is do Daughtry rock enough for MetalTalk’s pages? 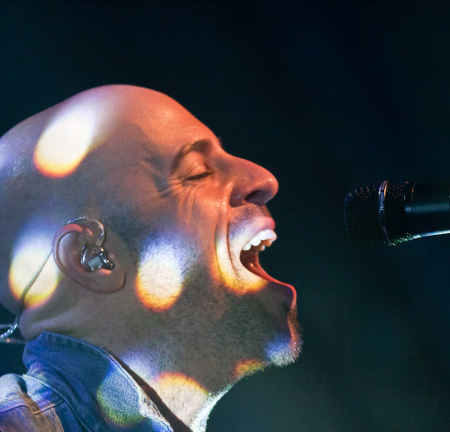 My belief is that Metal, and especially it’s close cousin rock, is a broad church and if it crosses over to the mainstream it’s still worth listening to. Chris Daughtry is a charismatic frontman, a terrific singer and a pretty good songwriter. He and his band specialise in radio friendly anthems and I’ve never been at a gig with so many big choruses for the audience to join in with.

The big guitar solo at the end of ‘Crawling Back To You’, the soaring chorus of ‘It’s Not Over’ and the feel good melodies of ‘Feels Like Tonight’ are all moments which are rock not pop and any rock fan with a broad mind could enjoy this show. Ignore the American idol background as unlike X Factor wannabees he writes much of his own stuff and plays and sings totally live.

It’s clearly not Metallica or Slayer but not a million miles from Alter Bridge or Volbeat to my ears. Let’s just call Daughtry distant cousins and enjoy the quality music! 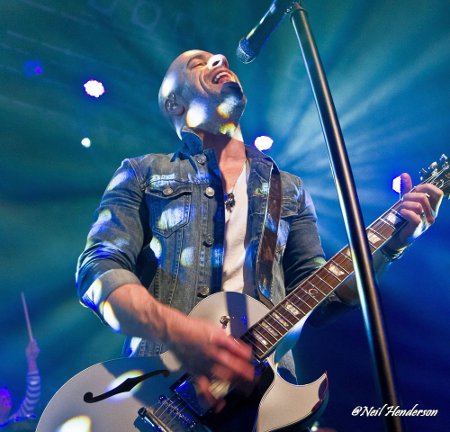