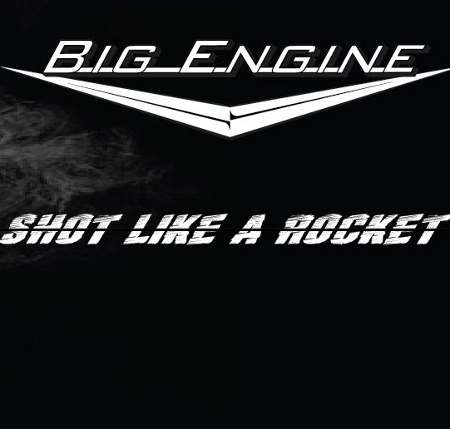 Swinging their goods from left to right as they dance out of the shadows that plague Jacksonville, Florida, Big Engine unveil their fourth studio album in fine rock n’roll fashion.

‘Party Like A Rock Star’ bounces out of the gates high on caffeine and enthusiasm which is more than appropriate for an album called ‘Shot Like A Rocket’. Following hot on its heels with more than a nod to The Cult is ‘Shake That Thing’ and the mood for the day is truly set in stone.

The band is the focus of Tony Mikus, a rock n’roll guitarist and vocalist alongside Hans Oellerich on guitars and backing vocals. Between the two of them, they reap their form of debauchery and it feels good if you’re partial to bands which play their low slung guitars and slurp tattoos, attitude and attraction every morning from a steaming cup emblazoned with fire and brimstone.

The river of rock n’ roll with a clean shaven face keeps flowing with ‘Call Me For A Good Time’ and the slightly KISS-like ‘That Girl’s A Freak’ with a lead vocal that hints at Ace Frehley. ‘Sister Mary’ provides a change of gear by branching out with some acoustic guitar.

With other bands going for a rougher sheen to their sound, Big Engine opt for the clarity and crisp delivery by slightly diluting any edge. This isn’t a criticism as it happens as the songs are allowed to breathe and in doing so allows the listener to be seduced.

I’ve certainly heard a lot worse than these 14 tracks, and they may be walking down the well-trodden highway many bands have visited before now – but they do a decent enough job. ‘Turn It On’ and ‘I’m Ready – Let’s Go’ both push firmly on the accelerator complete with a chant-a-thon in tow. There are mellow moments which break up the pace too which appear in a calculated presentation like ‘Not Your Fool’, ‘Nice Sass’ and album closer ‘No More Time’.

Overall, ‘Shot Like A Rocket’ is a pleasant afternoon drive through rock n’roll country; inoffensive, accessible and embracing good times. This does however present an oxymoron. Isn’t rock n’roll supposed to be dangerous and edgy? Well, depending on which side of the fence you wish to stand, this could either be a disappointing album or a collection of refined moments that you want to hear.

If you’re a little fragile with a hangover or some other reason for being timid, then this album will shake your world when you catch the title track or ‘Burn It Down’ which find their feet on the pedal more than most. Otherwise it will be a welcome audio companion if your ears insist on rock n’ roll dripping through your veins during all times of the day.