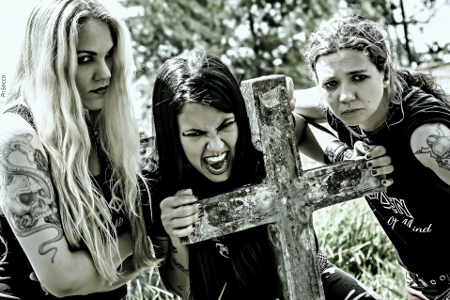 Thank you for taking time out to chat to MetalTalk. Your debut release ‘Victim Of Yourself’ is a pretty impressive album. I enjoyed it immensely and I have seen a lot of positive feedback about it. Has it been as well received as you would have hoped?

FERNANDA: “First of all, thanks a lot for such supportive words; this means a lot to us! So, the feedback we’ve been having is simply great! I feel like we were able to attend to people’s expectations. A lot of people were really excited about how we would sound on our debut, and now it’s out, I feel we could really please the majority of people! Besides supportive messages we have also been getting a lot of show proposals which can really mean something good!”

PRIKA: “I’m so happy with the feedback about it, we worked very hard in this album, but we have much to grow, we are making many shows and I hope that it brings an experience for us to be better. We have a long road ahead.”

I love the art work – who did you commission to do it and what were you aiming for and did they achieve it to your satisfaction?

FERNANDA: “Andrei Bouzikov was the guy that Napalm suggested to design our first EP artwork and we liked his job very much, because he has that old school thrash vein but also a lot of aggressiveness in his drawing which fits to our music, so when it was time to choose someone to create this album artwork, he was a natural option to us!

“We wanted an aggressive cover which could represent the idea of the whole album, and as the whole album concept has to do with bad human aspects and attitudes and things happening because of human attitudes, the cover needed to have something to do with that!

“Prika came with the initial idea, but of course we worked a lot together to define all the aspects of the cover! We appreciated the final result very much and it was pretty close to what we had on mind!”

PRIKA: “The idea was mine, to symbolize ‘Victim Of Yourself’ I thought two skulls, one skull killing the other, but both are the same skull. All this is aggressive and true, like a mirror that confesses what you did. Andrei Buzikov could draw exactly what I thought.

“The reality is the main concept, the feelings are true and the music is our life, our way of expressing. The name I had the idea when some people tried harm us for envy, talking about thing that aren’t true, trying denigrate our image, and these people have gone awry by their own attitudes, and this is ‘Victim Of Yourself’. I believe that we are responsible for our attitudes, if you make evil, you will get evil. To everything has back! Was a difficult moment and we don’t need of revenge, because the evil avenges himself of yourself. This album is very important for us, because this is the beginning for our history.”

What was the inspiration behind the album lyrics?

“We were not happy with the stuff we wrote about, so the music needs to reflect that. Every time I sing or play a song live, I remember what I was feeling when I wrote those lyrics, so this feeling influences a lot the energy I discharge on the songs! I think thrash and death Metal as a general have this tendency, the aggressive music is made to match the aggressive themes we approach on the lyrics.” 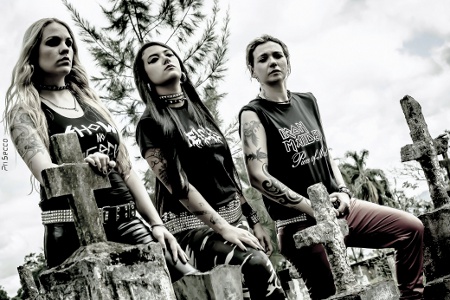 As an all female thrash Metal band has it been difficult producing music in a male dominated environment, what difficulties have you experienced if any?

FERNANDA: “I always say that, that as Metal is a male dominated scene, at least so far, it helped us a little to have our music promoted in an easier way, but as this tendency of more girls involved in Metal grows day by day, we can’t attach ourselves only to this label, and that’s why what matters the most to us, is our music! And yes, there is still a lot of prejudice permeating our Metal scene, but fortunately, it’s just a small part of headbangers!

“In the beginning it was harder for us to deal with this stuff, because we felt like always having to prove something to people, something like proving that yes, girls can play Metal, and yes, girls can play thrash Metal without appealing to anything else! But with time, all the arguments the prejudice people had about us ended up vanishing, because our work is true and honest and nothing can go against something made from the heart!

“So nowadays, there’s only a few narrow-minded people that still can’t accept the fact that women can also play thrash and as they don’t have arguments, they end up appealing to offenses and that’s the kind of things we don’t care about! Critics we can take and they are actually really welcome, but empty offenses mean nothing nowadays to us!”

PRIKA: “For me, the difficulties are the same that men have, the unique difference is that is much harder to find women to create a female band, but after all is the same for both. There is prejudice, but I don’t care because the prejudice is the minority, I worry only with my job.”

You have a very powerful sound, particularly for an all female trio, what reaction do you get particularly from male fellow musicians?

FERNANDA: “People always tend to be curious on the first moment, because it is still something rare, but then the majority show a lot of support, because they see it as if they keep on supporting us, is a way of supporting female Metal and more girls involved in Metal and they want that, so that’s why people tend to be very supportive! Not only because of the fact that it is new to see women playing aggressive thrash, but also because they wanna see more of that, and supporting it is a way of making it happen!”

PRIKA: “We have full support of all the big bands of Brazil, and many bands around the world. I respect when somebody doesn’t like our songs, because taste is something very particular. I respect all bands, even if i don’t like the songs from this band, because every band works hard. There’s no reason for the people not to respect us. We give value for everyone that supports us.”

What bands or musicians do you find inspiring?

FERNANDA: “Personally, in the bass guitar, I am really influenced by Steve Harris, Geezer Butler, Geddy Lee, Steve DiGiorgio. As for my vocals in Nervosa, Schmier, Chuck Schuldiner, John Tardy and Leather Leone are my top influences! As for bands, my favourite one ever will always be Iron Maiden, but band that really influenced me on writing songs to Nervosa were Slayer, Nuclear Assault, D.R.I., Coroner, Destruction, Death, obituary, Sadus and many more!”

Metal gigs are very male dominated, do you find that at your gigs more females come to see you than if you were a male band?

FERNANDA: “Cool questions, because it is a fact in our gigs: there are many more girls than what I am used to see in bands with guys’ performances! Of course women are getting more and more involved in Metal, especially in gigs, sometimes here in Brazil; at least, the crowd is 50% male and 50% female! But in our gigs not only I feel there’s a LOT of girl, but I also feel them very supportive and I also see that most of them feel really represented, which is pretty cool!”

PRIKA: “The truth is that women are increasingly participating of Metal scene and of other scenes. The tendency is to grow, and it’s very important to be equal. The presence of women should be normal and proportional to the number of men. It’s very cool to find women in shows, bands, ‘zines, etc…”

Do you have a message for other female bands?

FERNANDA: “Keep up the hard work – and we know how hard it is, because it seems that we always have to prove something and not only present our music as other bands do – believe your work and your band, try to take it easy when it comes to dealing with your band mates because we know women can be really hard to get along with in a band, and be focused and committed: there are the two main keys for your work to move on!!”

PRIKA: “Don’t give up on your dreams, many people will say lies about you, but all of this is envy, you want, you can, self critical is what you need only, believe in your potential, and remember that you are a victim of yourself, in other words, what you do will back to you, making the good you will have the good, making the evil you will have the evil.”

What tour plans do you have?

FERNANDA: “We have deals with bookING agents for touring in South, Central and North American as well as Europe, so if everything goes right, we may have pretty cool news to announce soon!”

PRIKA: “My life is the music, and I hope to play in many places, make many new songs, I hope to write a new album soon, to know many places, countries, people, etc… We work for the band not to stop.”

What’s next for Nervosa, any other plans or ambitions?

FERNANDA: “We are a band which loves being on the road, so this means this is and will always be our main focus! We have an album to promote which we like very much, so we want everyone to listen to it in the best way possible: LIVE! Besides that, we want to start writing new songs soon, so the thrash machine won’t stop!”

PRIKA: “I want to play in many big festivals along with great bands, I want to make a world tour, and release a new album for the next year.”

FERNANDA: “Thanks a lot for this interview opportunity, keep up the good work because the bands need you, and for everyone who’s reading this, because your support is the main responsible to keep the Metal legacy alive!”

PRIKA: “Thank you very much for the opportunity, and congrats for your job, this site is very cool! Thank you so much to fans and readers, keep thrash in your head!