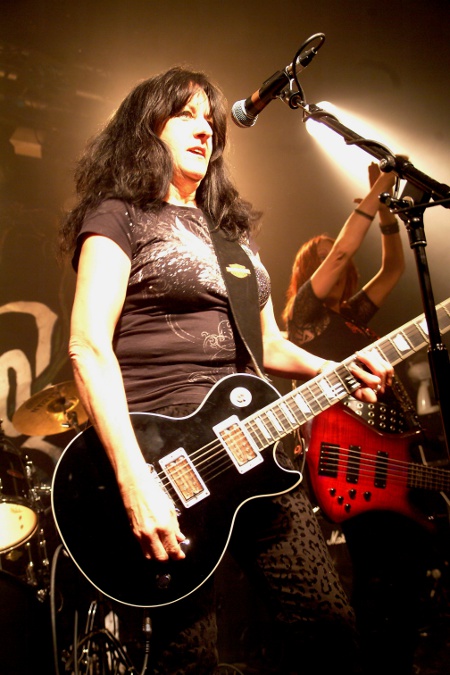 A mouth watering double pleasure for music lovers who like their metal pure and simple with a traditional feel. The gals from Sarf London keep their fans happy playing every year but it was a rare treat to see the boys from Newcastle as Raven haven’t toured the UK for five years.

A double headliner show where around the country Raven were going on last but for this London show duties were swapped around so Girlschool could go on for the graveyard shift on their home turf, which suited me fine because as much as I adore Girlschool I was hoping to sneak off early and travel down to Merton to catch former Gillan drummer Mick Underwood perform some old faves with his band Glory Road.

Raven are a band who divide opinion with their wacky show full of over the top metal but many appreciate and love the band who started the whole speed metal movement which would later transform itself into the world of thrash metal. It’s amazing to think that Raven will be celebrating their 40th anniversary next year but it wasn’t until 1980 when they engraved their name into our collective metal hearts with a trio of classic albums.

Although new boy, drummer Joe Hasselvander, has been with Raven since 1987, tonight’s short 45 minute set was centred on their earlier classic output. There was little time to catch your breath as Raven bulldozed through at breakneck speed gems such as ‘Take Control’, ‘Live At The Inferno’, ‘All For One’ and ‘Rock Until You Drop’.

John Gallagher has an ear piercing vocal range of a strangled parrot that makes Justin Hawkins of the Darkness sound like a pub tribute singer. The Gallagher brothers cross axes in a metal duel in a fury of sparks in a show of what really is a case of ‘Mind Over Metal’. 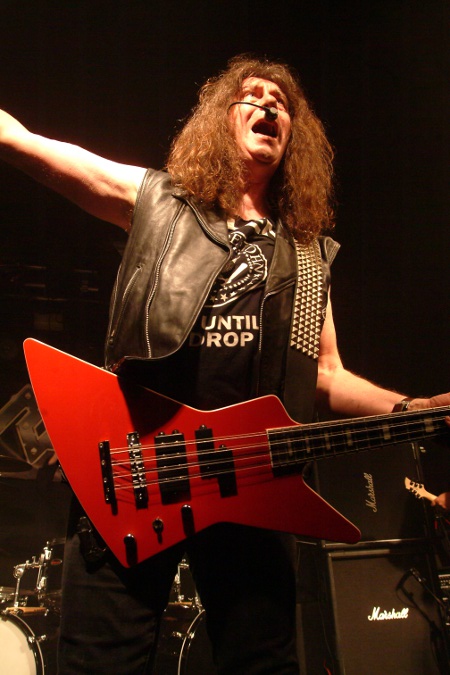 The set ended in explosive fashion with ‘Break The Chain’ which included a medley in homage to their heroes with snatches of Status Quo, Sabbath, Budgie and Judas Priest. Chaotic and full of fun. Raven delivered.

I hung around for the first three numbers of Girlschool’s set and they sounded great, as they always do. It was at this point I made a dash for it to catch Mick Underwood’s Glory Road at the Merton Manor Club, so I handed reporting duties over to MetalTalk’s John Oakley to deliver his verdict on the Hit ‘n Run smashers. 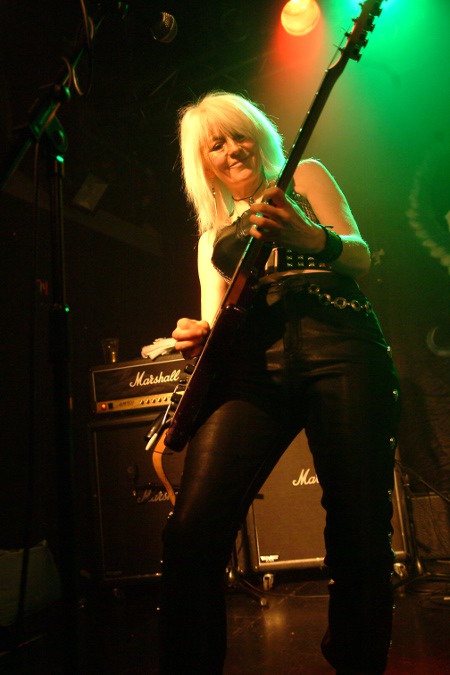 Girlschool are a London institution. They hit the stage in Norf Lahndans’ the Garage in a haze of chaos and start to plough through the decades of back catalogue. It’s a testament to the ladies legacy, longevity and influence that the Garage has got a very respectable crowd in tonight.

Tonight’s set list has everything you want from a Girlschool gig. I missed the opening number as I was cornered by Dave Lights of Maiden fame, who is very enthusiastic about doing the show tonight, in the little boys room. 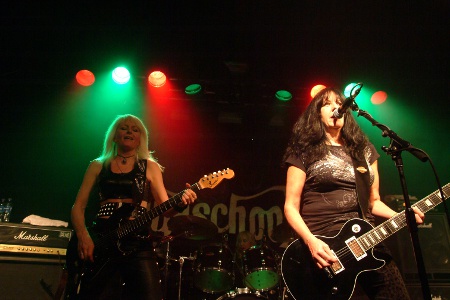 From ‘Demolition Boys’, and ‘Yeah Right’ through to ‘Emergency’ the crowd sing along and bounce about. Kim McAuliffe has the Lioness’ share of the singing, but when Enid Williams takes over, in her trademark primary school ma’am preciseness and vocal power, Kim is happy to pose demurely like a female Joey Ramone, head down and boogying away.

The songs are so well worn in to the Girlschool set, delivered professionally and so well polished but with that air of dizzyness that the ladies project to good effect. So, long standing tribute ‘I Spy’, with Ronnie James Dio’s guest vocals blasted out by Enid is a loving tribute, but also testament to say that our childhood heroes are mortal, and getting on a tad. 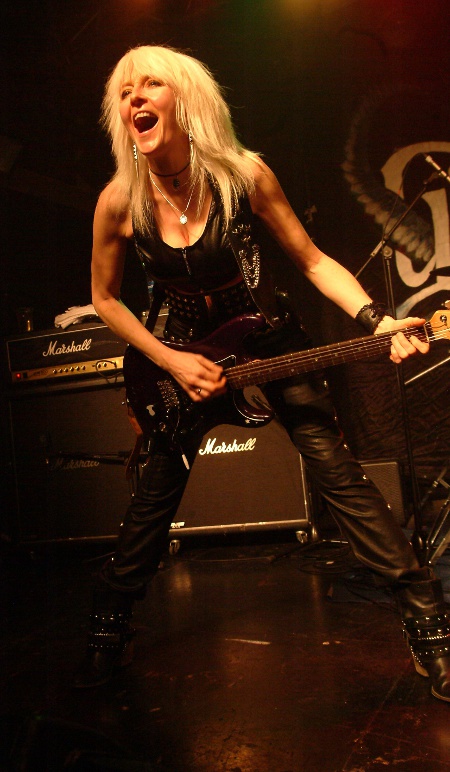 It’s hard to believe the ‘Hit And Run’ album is 33-years-old, but the ladies stand the test of time and it’s a monument to the power of the music that hits from this album have influenced much of tonight’s set and many an artist since them.

I’ll always love the opening wail of ‘Racing With The Devil’, for sounding like a live formula one car screeching round the hall, with the Jackie Chambers bouncing off the walls as some kind of Ice blonde axe Valkyrie. As the powerhouse behind the band, she has truly come an underrated queen of the guitar melody. She cuts quite a figure with amazing presence, somehow maintaining modesty and resplendant in PVC and a white Flying V dynamically delivering the killer chops. 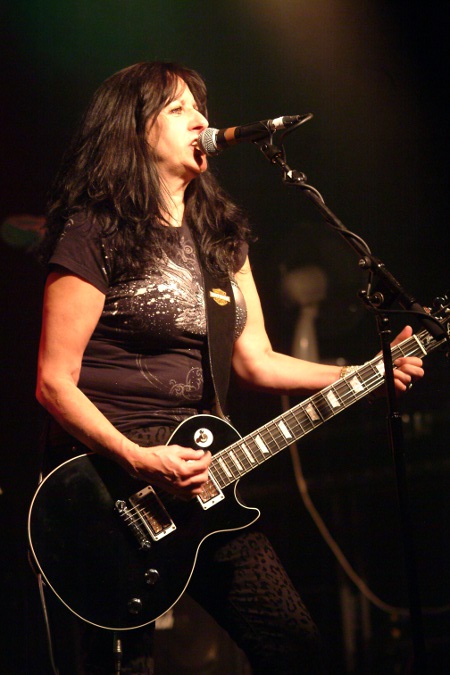 So, as the boys from Raven come on and dwarf the Girlschool ladies in stature, for the encore of ‘Take It All The Way’, it’s Girlschool who are the true metal giants here and should be recognised for that status in the heavy metal world.

It’s not sold out tonight but it’s certainly busy!! While tonight there are elements that make you think we’ve entered some kind of heavy metal knitting circle with some banter that would make Mrs Slocombe blush, you’d want Girlschool to be your rock and roll fairy Godmothers and they still know how to show London a great metal night out! Cheers you lot, indeed. 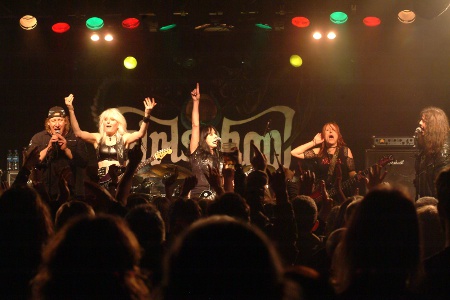 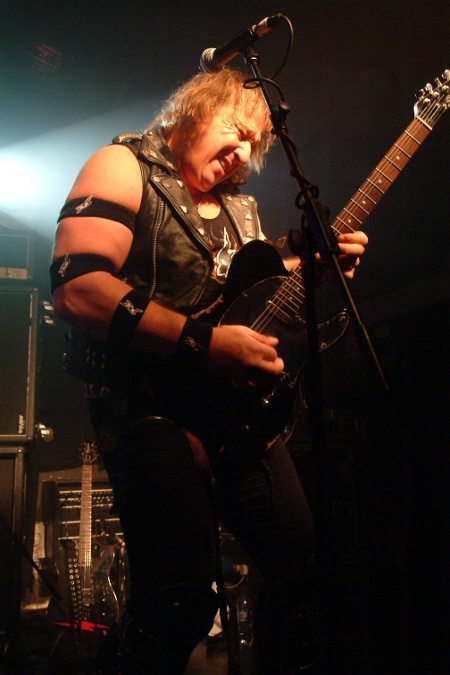 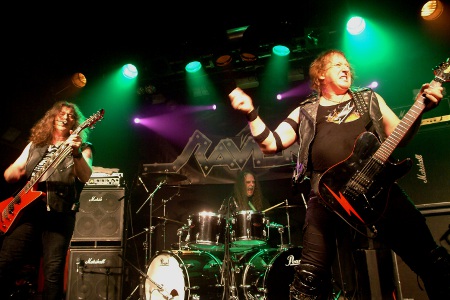 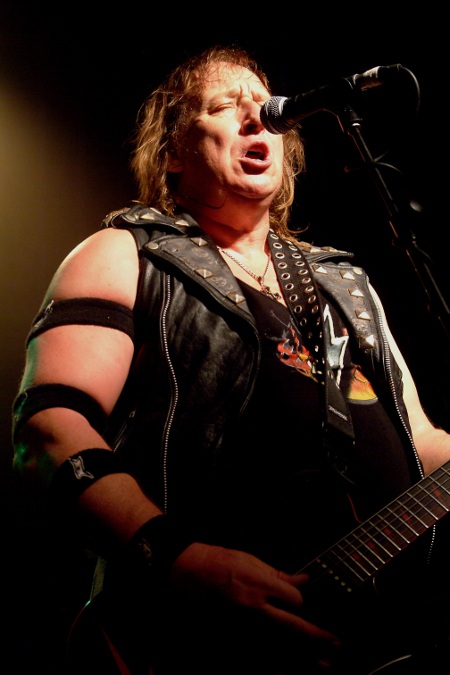 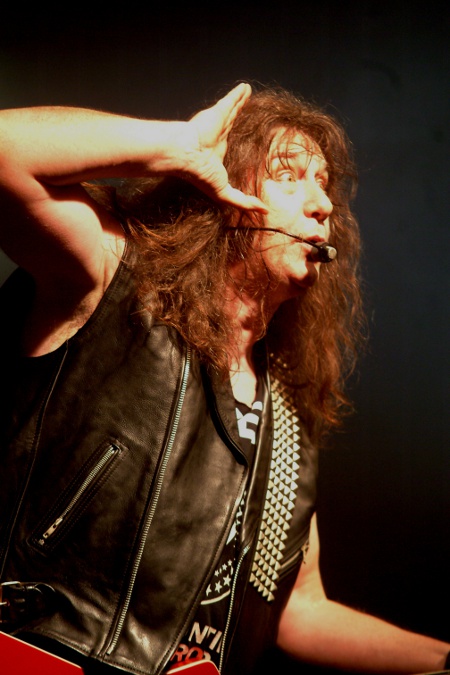 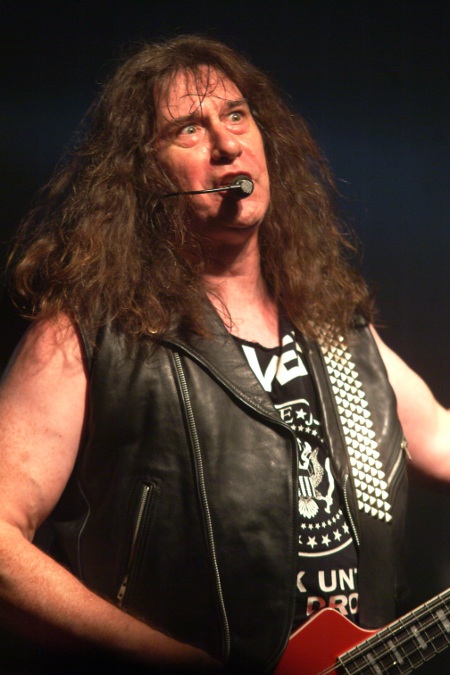 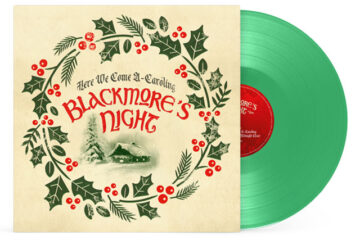