Sunday, March 27th, the day I and another 12,999 people had been waiting for had finally arrived. I’d been anxiously waiting for this day for the past month or so, watching all videos from the current tour on YouTube, sharing them on Facebook as well as bombing my friend’s wall with them.

Anyway, the gig was scheduled for 8.30pm and the venue was supposed to open at 6.30pm. There would also be a supporting act, Shadowside – a Brazilian metal band that doesn’t say much to me, besides the hot chick on the lead vocals.

My friends and I arrived at the arena at around 6.20pm and all we could see was a crowd going back for what seemed like miles. You could feel and hear the energy and excitement of the fans while singing their football chant “Ole, Ole Ole Ole – Mai-den! Mai-den!!”

At 6.50pm the queue had not moved a single inch and that was the first signal that something was not right. I started to think: “Damn, the gig is being delayed”, “I wonder if they’re doing the sound check right now”, “What the hell is happening in there?” “If they take more time, the support band won’t have time to play”, “Is there going to be a support band anyway?”

I can’t remember the exact time I finally arrived at my seat, the only thing that I remember is that it didn’t take too long for the supporting band to enter the stage. Their set did not take too long – twenty minutes or so. After it had finished the only thing my mates and I could say about it was: “Yeah, she’s indeed very hot!”

Not too long after that could we finally hear the first chords of UFO’s ‘Doctor, Doctor’. My friends and I looked at each other and said: “It’s bloody time!”

Our excitement did not last too long, though. After a long intro, Maiden came into stage as energetic as ever, playing the title song of their latest album ‘The Final Frontier’. At around 1:30 minutes into the song, my friend pointed to something happening in front of the stage and said: “they’re invading!” and I quickly replied: “Don’t be a fool! That’s the guy from IMTV simply going backstage”.

I just realized I was completely wrong when Bruce stopped singing and decided to only observe the situation while the band kept playing. As soon as the band finished the first song, Bruce started to explain what had happened;

“The barrier has collapsed”, he said. And then, he added that the barrier is very important for our own safety and because of that the band would leave the stage for ten minutes so that it could be fixed and then they would then re-start the show. The people seemed to understand and they even started to scream for him. 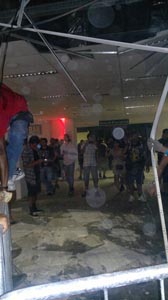 It was probably the ten longest minutes of our lives and after that a lady from the arena management appeared on stage. Oh man, that woman had balls! She started to say something but everybody was booing her so loudly that nobody could hear her speaking. It was only when Rod Smallwood appeared on stage and asked everybody to shut the #$%@ up (he used polite words, of course), that the people actually shut up and started listening to her. Apparently, more minutes would be needed in order to fix the barrier.

I’m a Maiden fan for quite some time and I know that when Rod has to show his face, it’s because there’s something seriously bad going on. I said to my friends: “They’ll cancel this shit!” They didn’t say anything back, only nodded their head in agreement.

We couldn’t believe what was happening. The crowd was clearly getting more and more impatient as the minutes passed. After thirty minutes or so, we could see Bruce coming into the stage all by himself. Oh no, the woman with the huge balls was right behind him. “Yeah, they’re definitely going to cancel this.” – I thought to myself.

Bruce started to say how hard the venue’s staff had tried to fix the problem, but unfortunately the barrier was completely broken, then he added how important our safety was. At this point the people were still supportive and clapping their hands after every sentence he said. But when he said “Unfortunately, tonight we can’t play, but tomorrow…”, I think those were probably the worst boos he’d ever received in his life as a professional musician.

He talked a bit more, even trying a little Portuguese “por favor (Portuguese for ‘please’) listen…” He once again explained how worried the band was about our safety and the police had warned them that it was not safe to carry on with the gig. 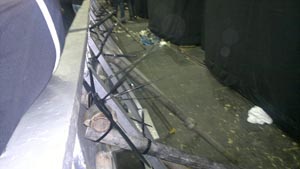 “Tomorrow we’re going to build the best fucking barrier the world has ever seen,” Bruce said. He also begged us not to damage the arena on our way out, because if we did this, then the gig wouldn’t happen at all. All we could hear was boos and curses, and all we could see were cups of beers flying from one side to the other.

That was sure a disappointment, but I’d say that 99% of the people there understood the situation. Of course, when we talk about masses, there’s always a number of people who are there to try to ruin everything.

I saw people punching the walls, kicking fire extinguishers (What? Yeah! People are dumb enough to kick fire extinguishers!), nothing that made much sense anyway. I did see an interesting way of protesting: a guy cut the rope holding the huge floating balloon of the beer company who sponsors the venue and took it home!

I didn’t see any very serious things happening at all, not when I was leaving the place and not even when the barrier collapsed. However, the next day, browsing local news websites, I could see that there was indeed some damage done to the venue and most seriously, one of the flying cups of beers did hit the soundboard, fully damaging it.

“Damn, the postponed gig could easily become a cancelled gig”, I thought.

I spent the whole Monday checking Maiden’s official website every single hour as well as the arena’s website for what, in my mind, was inevitable: the gig cancellation.

At 4.00pm I hadn’t yet read anything confirming my darkest thoughts and I was finally convinced the gig was indeed going to happen. We left home one hour before we did the previous day. It was Monday, a working day, and all we wanted to do was to avoid the rush hour.

Felt weird arriving there and seeing no huge queue outside the venue. What happened was, the venue management developed some brains and let the people get in in advance. There was no hot chick leading the support band this time. It was a 100% Maiden only evening. 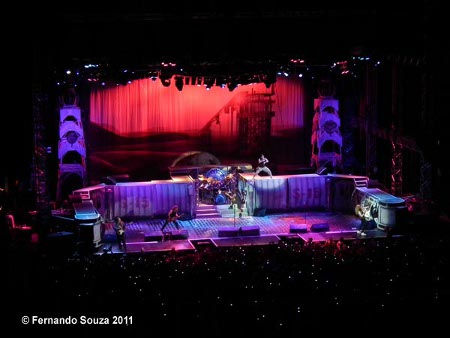 ‘Doctor, Doctor’ hits the speaker and we all know it’s just a matter of minutes for full excitement. ‘Satellite 15… The Final Frontier’ opens the show with a few futuristic projection on the screen. On stage, the scenario is a spaceship with a starry sky.

The reception was very warm. Proving that ‘The Final Frontier’ has not reached first place in sales in 28 countries by chance, the audience sang along with Bruce. The excitement did not diminished with the next song, ‘El Dorado’, which has a powerful bass intro played by Steve Harris. It was with this song that Maiden won their first Grammy this year for best Metal performance. 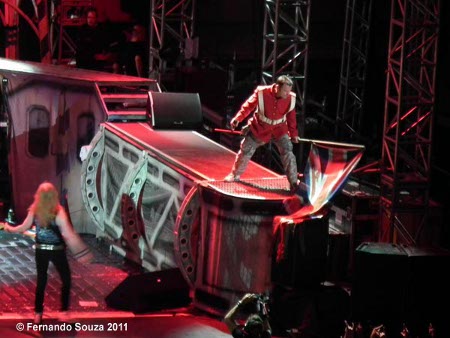 Overall, the new songs were well received. ‘Coming Home’ was also sung by many, as for ‘When The Wild Wind Blows’, although very nice, it’s too long and some people decided that it was beer time.

But of course you cannot argue with history. The Arena started to boil when the first chords of ‘Two Minutes To Midnight’ were played. At that moment, Bruce had the audience in his hand and led the show with its known expertise and many “Scream for me Rio de Janeiro”‘s, his famous catchy phrase.

I believe it was after this song that he first talked to the crowd: 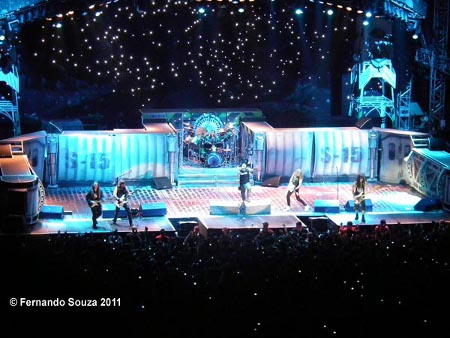 It was laughs all around. That’s it, all the tension from the previous night was gone. Everybody was in ecstasy.

Maiden brought news, but they also do not give up on those moments that every fan expects: Bruce waving the British flag waving while singing ‘The Trooper’ or the chance to sing together all the lyrics of ‘Fear Of The Dark’. 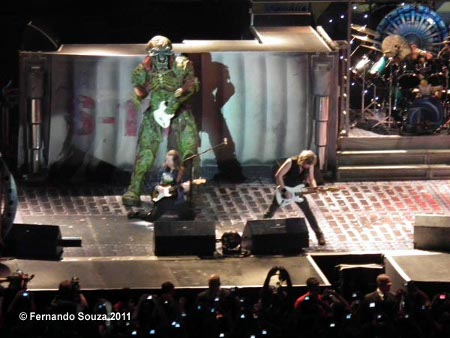 During ‘The Evil That Men Do’, Maiden had a fourth guitarist. As usual, Eddie came on stage. To the delight of those present, the three feet tall puppet picked up a guitar and pretended to be playing with the band.

But what impressed the audience was the giant Eddie which appeared behind the stage during ‘Iron Maiden’. This alien version of Eddie is killer! Probably the best ever Eddie so far! 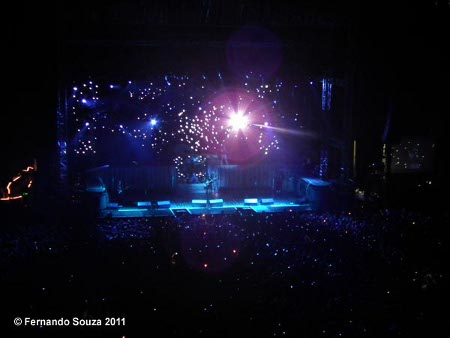 We were lucky! After the show, I read somehwere the São Paulo and Rio were the only places to see Eddie before the DVD recording in Chile. Apparently, Eddie was ready to go before expected so the band decided to use it in a couple of gigs in Brazil as a sort of test drive.

When “Always Look On The Bright Side Of Life” by Mony Python (btw, what a perfect song to end a perfect night!) started to play on the speakers, we all came out of a trance and went back home with a smile on our faces and wondering when it would be the next time we would see these dudes again. 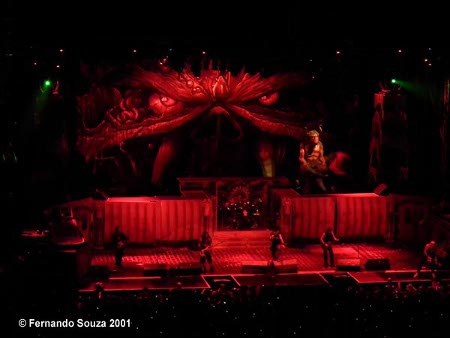 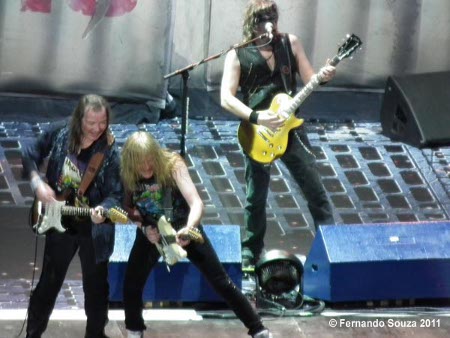 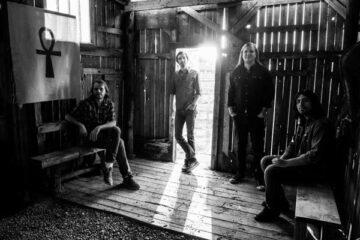