After a rather disorientating night in which it never really got dark (at this time of year the sun doesn’t set so it’s virtually 24 hour daylight) and absolutely nothing to do with the acres of beer consumed the day before, honest, it was a slow start to the Friday but the ten minute walk along the riverside to the Getaway arena on a baking hot and beautifully sunny day was just what was needed to clear the head and kick off another festival day. 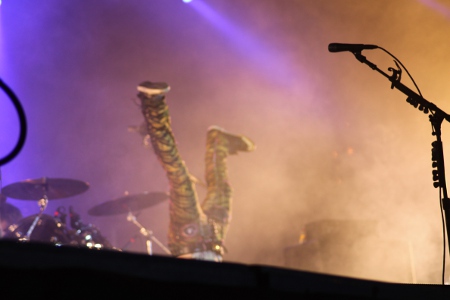 There are a couple of odd things at this festival, the first is the lack of grass (stones are really uncomfortable for sitting on and damn dangerous to circle mosh on judging by the amount of blood flowing!) and the second is the fact that you can only drink beers at the bar areas and can’t wander around with a bottle in hand! A very bizarre thing if you ask me and it leads to a half empty arena and absolutely rammed bar area.

Admittedly, you can see both main stages from the bar but surely the organisers would rather people are watching the bands by the stage? Come on guys, it’s a festival, relax a little!

Anyway, minor irritation aside, the first band of the day for me was Agnostic Front and with the crowds now picking up in numbers, they were absolutely wicked. There’s nothing like a bit of utterly brutal New York Hardcore to get the blood racing in the afternoon, and they were the first band of the weekend to get a serious moshpit going on. Vocalist Roger Miret had apparently been unwell but with the absolutely full on performance he gave, you’d never have guessed it. Blisteringly good stuff.

Next up, Hardcore Superstar and having never much been into the glam/sleaze side of rock, I was expecting to not really like this lot. Their hard hitting ‘cock rock’ definitely harps back to the late 80s of the Crue et al, and I’ve got to admit, after a couple of tracks I found myself subconsciously starting to boogie and getting rather into them. Singer Jocke Berg’s sheer enthusiasm and energy was totally infectious and even on a day as hot and humid as this, he never let up for a minute, bouncing around and belting out the tunes with gusto.

After a brief hiatus that included a couple of rather welcome hair of the dogs, it was time for the feisty one himself, Danzig. It appeared that his reputation preceded him as there were lots of very twitchy looking staff running around trying to get everything just right before he came out, and not without reason.

As he strutted on stage and grabbed the mike to roar into action, the monitors decided to pack up leading to a major temper tantrum involving him throwing both of them around and giving some death ray glares at the people responsible! 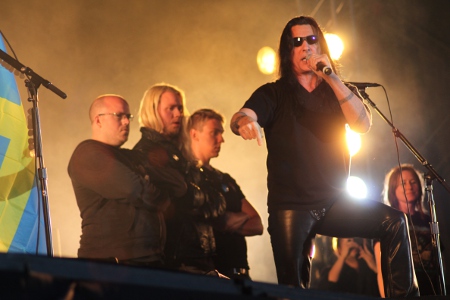 Whether this rattled him or not, I don’t know, but all his huffing and puffing didn’t blow anyone away and the performance was not the best I’ve seen, his band were as fine and tight as ever but apart from the classic ‘Mother’, it just felt a bit off. After this, I’d love to see the uber fine guitarist Tommy Victor back with his old band Prong, he’s a little wasted playing second fiddle to this man.

No problems like this with the next band, the ever youthful Kreator. Twenty-five years down the line and these small, unassuming Germans are still playing like demons, hitting the stage like a freight train with their wicked thrash Metal that is as hard, fast and fierce as the day they started.

Mille looked like he was having a blast as they belted their way through ‘Warcurse’, ‘Endless Pain’ and ‘Pleasure To Kill’ to some serious adulation from this Swedish crowd, and they are still easily one of the finest thrash Metal bands on the scene today.

On the mooch back to the main stage for the night’s headliners, there was suddenly a buzz going round about a big news announcement and as we hustled up to get a decent position at the front, in a huge blast of light, striding onto the stage clad in black leather and looking extremely fit came the Man of Metal himself, Manowar’s Joey De Maio!

To the audience’s utter delight, he announced that finally Manowar would be back in Sweden in all their glory, headlining next year’s Getaway and doing a full show complete with all their own gear, and would be ripping the place apart! Excellent!

Finally, announcement made and with Joey’s departure, it was time for my last band of the festival and one I was really looking forward to, The Darkness.

After a five year absence, I’d seen them at the Download Festival and they were back playing better than ever but I wondered how they’d go down with this much more hardcore crowd. Brilliantly, was the answer to that one!

Justin Hawkins, looking lean, fit and tattooed was as enigmatic as ever as they got everyone rocking and singing to their classics, ‘Get Your Hands Off Of My Woman’, ‘Friday Night’, ‘Nothing’s Gonna Stop Us’ and ‘Love Is Only A Feeling’.

His vocal gymnastics are simply amazing. How the hell he reaches those high notes no one knows and he’s a fantastic frontman. His antics (and unusual dress sense!) keeping everyone buzzing throughout the whole set, with ‘I Believe In A Thing Called Love’ going down a complete storm. Even the most hardened Metal head could be seen grinning and bouncing around to this cracking band and they were a fitting end to this properly good festival.

If you’ve never been to Sweden, well now’s your chance. The weather’s fantastic, the people lovely, the beer’s rather tasty too and Getaway 2012 has got the Kings of Metal headlining.