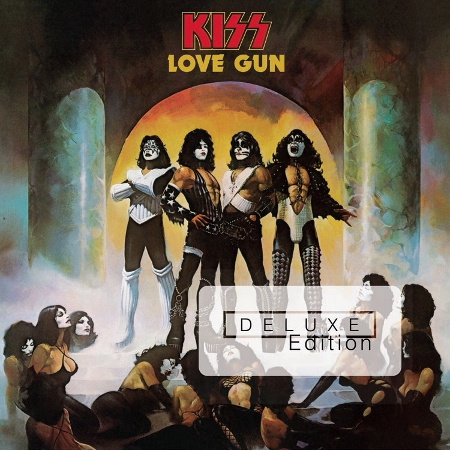 ‘Love Gun’ was first released in June 1977. It was Kiss’ sixth studio album in four years and was both the first Kiss album to feature lead vocal performances from all four original members and the last album played by the original four members without the help of outside session musicians.

Eddie Kramer produced the album and recorded it at the Record Plant Studios in New York. This new re-release includes the original album, remastered and a bonus disc of rarities.

The opening track is ‘I Stole Your Love’ a classic Paul Stanley song, great riff, great vocal and a brilliant solo shared by Paul and Ace. This is one of the best Kiss songs ever.

Paul Stanley claims to have written the title track on a flight to Japan. In fact he mostly remembered a song called ‘The Hunter’, which had been recorded by several artists prior to then including Blue Cheer, Albert King and Free. It has very similar chords, some of the same lyrics and even the title ‘Love Gun’.

That’s not to say that Paul didn’t add to it with a chorus melody (Sean Delaney also claimed to have helped write the chorus but remained uncredited) and a re-written verse. Paul’s version is infinitely rocked up and has one of Ace Frehley’s best ever guitar solos. ‘Love Gun’ remains a Kiss classic in the live set to this day.

Paul’s other contribution is ‘Tomorrow and Tonight’, a pop-along teen anthem. It’s OK but not it’s not in the league of anthems like ‘Rock and Roll All Night’ and ‘Shout It Out Loud’ which were both already in their live set, meaning that ‘Tomorrow And Tonight’ was never played in concert.

Gene wrote four songs that ended up on the album. Of them, my favourite is ‘Almost Human’. I’d rate that as a Kiss classic. It rocks, it has horror themed lyrics and it’s Gene at his best. Strangely, it never ended up in their live set either.

The one of the four that did make it to the live set was ‘Christine Sixteen’. While the song itself is musically OK, the lyrics have me on the edge of calling Operation Yewtree. Sorry Gene, that’s a no-vote from me.

Gene also has ‘Got Love For Sale’ and ‘Plaster Caster’ on there, both are good, solid songs. They’re groupie tales, with ‘Plaster Caster’ being a tribute to the legendary groupie, Cynthia Plaster Caster who made moulds of rock stars genitals!

Peter Criss had up until now mostly sung songs written by the other members of Kiss, such as Paul’s ‘Black Diamond’ or Ace’s ‘Strangeways’. Since the success of Peter’s song ‘Beth’ the previous year, he now started to bring his own songs to the band.

When I say his own songs, what I actually mean is songs mostly written by a guy called Stan Penridge who was in a band called Lips with Peter, before Kiss and several bands with him after Kiss.

‘Hooligan’ on the album is one of those tunes. It’s not great but it’s difficult to see how you could help a song that has the chorus rhyme of “Hooligan- woah, no school again again”. Then again studio engineer, Corky Stasiak later claimed to have come up with the “school again” line so maybe I shouldn’t be so harsh on Peter and his mate.

‘Shock Me’ was Ace’s first lead vocal on a Kiss song, starting a ball rolling that that led to his excellent solo album the following year.

Legend has it that Ace was so shy recording his vocal part that he lay down so nobody in the control room could seem him. Even so, the song and its performance is a classic and one of the highlights of the record.

An interesting point to this album is that Ace claimed to have played bass on ‘Shock Me’. He also probably played both guitar parts while he was in the studio rather than teach Paul the song.

Likewise Paul played bass on the demo of ‘Love Gun’ and then did it on the album version too. There was a rumour that he also played the bass on ‘Tomorrow And Tonight’. He also played a short guitar solo on ‘I Stole Your Love’.

Gene claimed to have played the rhythm guitars on ‘Almost Human’, ‘Plaster Caster’ and ‘Got Love For Sale’. As he did on the demos, it’s not surprising that he replicated them similarly for the album recording.

When we put that lot together, it looks like each member was mostly going into the studio separately to almost fully record their own songs rather than a band recording the songs together. Then the missing gaps such as guitar solos and backing vocals were overdubbed on each others’ songs later.

The album ends with a bizarre cover version of the Crystals ‘Then He Kissed Me’. Kiss cleverly re-titled it ‘Then She Kissed Me’ but did little else to vamp it up. Apparently the band jammed around with it in a soundcheck at the Volkshaus in Zurich, Switzerland on the Destroyer tour and the idea stuck to maybe record it one day.

That song is very un-Kisslike for me. The four of them have spent the rest of the album boasting about their love guns, stealing girls’ love, getting them to put on black leather, stalking them outside schools and generally being hooligans; then they end the album with a soppy love story where our hero falls in love at first sight, and after asking the lady of his dreams onto the dancefloor, puts his heart on the line and in return gets a peck on the cheek.

Was this the same band that were getting their cocks out to be cast in plaster a minute ago?

This re-released version of the album has been remastered from the original two inch tapes. It’s been EQed a touch brighter and they’ve probably compressed it a little more to bring out the bottom end. If those last two lines were Greek to you then I’ll sum it up as, “It sounds much the same as before”.

Then with this release, we get a bonus disc of rarities recorded around the Love Gun era demoes, live track and a Gene Simmons interview! I really hope Kiss re-release all their albums in this format with an extra disc of rarities. It’s great!

I love hearing songs as their original demo format and here we get quite a lot of them.

‘Much Too Soon’ is a Gene song. It’s OK and always good to hear an unheard Kiss song but it’s also easy to hear why it wasn’t on the album.

The ‘Plaster Caster’ demo sounds pretty much the same as the final album version, which isn’t surprising as Gene does the guitar, bass and vocals as he later did on the album.

‘Reputation’ is another Gene demo. This one was first released on the ‘Kiss 40’ album. I quite like this song. I think the album could have been stronger if this was on it.

There are two demos of ‘Love Gun’ the first is simply Paul going through the chords for love gun, talking them through and playing guitar by himself. It’s maybe not the kind of thing you’d like to listen to every day but it’s curious to hear this classic song being explained by its writer.

The actual ‘Love Gun’ demo is next. Paul demoed this song with Steve Korff (from NY band The Planets) on drums. The song is completely written, everything is the same as the final album (except it is missing the guitar solo), if anything it captures a bit more energy than the album version. This was first released on the Kiss Boxed Set.

There’s an instrumental demo of ‘Tomorrow And Tonight’, which would be good for Karaoke parties!

The demo ‘I Know Who You Are’ is a good Gene song which eventually ended up in a slightly different form on Gene’s solo album the following year with a new chorus called ‘Livin’ In Sin’.

The only disappointment with these ‘Love Gun’ era demos is not hearing the first recordings of ‘Christine Sixteen’ and ‘Got Love For Sale’. These two tracks were demoed by Gene with Alex and Eddie Van Halen and the recordings have never been heard since. That would have been amazing to finally get.

On the bonus disc are also some live recordings. I had thought they would simply give us the studio enhanced ‘Alive2’ songs but no, these are live from the Capitol Centre, Landover, Maryland in December 1977. They have great energy and a rough feel that ‘Alive2’ lack. They also have a bass sound like a foghorn.

The three tracks are ‘Love Gun’, ‘Christine Sixteen’ and ‘Shock Me’, the last of which features both an interesting attempt by Peter Criss to do the drum fill at the beginning of the song and an excellent extended Ace Frehley guitar solo, as opposed to the edited one we get on ‘Alive 2’.

There’s also a great Gene Simmons interview, done on the phone from his hotel room in Montreal with a local radio DJ while on the ‘Love Gun’ tour in July 1977. Gene starts by plugging the show that night at the Montreal Forum (with opening act, Cheap Trick). He tells the stunned DJ: “A Kiss show is meant to entertain people like my mother…”

He talks a bit about the album recording process and how they pick which songs will make it onto the final record.

When the interviewer asks what the future holds for Kiss, Gene says that they’re “not pompous enough to do a concept album”. At this point he obviously didn’t know they were going to do just that with ‘Music From The Elder’ a few years later.

To put it into perspective, if this were a Mötley Crüe album it would be my third favourite.

The bonus disc is a great idea. While I don’t think it’s going to be a regular on my turntable, it’s a fascinating glance into how the album was written and great to listen to previously unheard versions and live tracks. I really hope Kiss release all their albums in this format with a bonus CD of rarities!