I think this is one of the big debates in rock. I have this debate with Metallers on a regular, probably
weekly, basis with several different people.

So far this week I’ve had this chat three times – once with Skunkworks guitarist Alex Dickson and then with Tank guitarist Cliff Evans and now I’m having it with you (does that count?).

Everyone I’ve ever met agrees that Randy Rhoads’ original versions of the ‘Blizzard Of Oz’ and ‘Diary Of A Madman’ tracks are pure genius, never to be bettered. But on the question of which guitarist after him in Ozzy’s band interpreted those solos best, opinion is divided.

Alex Dickson was leaning towards Jake, while Cliff was keen on Bernie Tormé.

The thing is too, that every opinion is a very valid one. Ozzy’s never had a shit guitarist. They’ve all been excellent and all have added something of their own to Randy Rhoads’ original sound.

First let’s have a look at how Randy did it. Here’s the riff-fest that is ‘Crazy Train’. Notice the effortless vibrato, notice the… oh, just listen to it!

After Randy’s tragic death, former Gillan guitarist Bernie Tormé was called in at very short notice. He only did a handful of shows and by his own admission barely had time to learn the very complex guitar parts. What Bernie brings to the table is a wonderful feel, improvised on the spot around the themes Randy had originally written. Sadly there’s no video of Bernie’s short time in the band but check out this audio bootleg

Bernie didn’t hang around in the band for long. His replacement was Brad
Gillis, later of Nightranger fame. Again Brad’s a great player brought in at
short notice but listen to his insane whammy bar action…

Brad was again only a temporary replacement and next up was one of my personal
favourites, Jake E Lee. At a time when guitar heroes (like the last three) were
all gripping their whammy bars like their lives depended on it, Jake threw his
out the window and simply mangled the guitar neck himself. This is one of his
early gigs with Ozzy.

After Jake quit the band, a hot new teenage guitarist by the name of Zachary
Adams was found. Under the name Zakk Wylde he remained as Ozzy’s longest serving
guitarist and to many he is the ultimate Ozzy guitar hero. Let’s see an early
gig of his.

Zakk did a bit of “maybe I’m in the band and maybe I’m not” type stuff later on and Ozzy started looking for new guitarists. One he tried out was Testament’s Alex Skolnick. As far as I know Skolnick only did one show with Ozzy (at Nottingham Rock City). There’s no video of the show, but check out this audio; they’re fairly racing through the track…

The next in the long queue of Ozzy axemen is another favourite of mine, a former student of Randy Rhoads, it’s Joe Holmes…

Ozzy’s most recent recruit is Firewind guitarist Gus G. He’s stepping in some pretty big shoes by now isn’t he? But look at him, he’s awesome too…

So who’s the best out of that lot? Very difficult to tell isn’t it? Here’s my own personal top five;

2. Jake E Lee
I loved his playing with Ozzy, though he always shone more in concert than on record. That is until he formed Badlands…

3 Bernie Tormé
Such an underrated player. Check out the GMT album, Bitter and Twisted…

4. Joe Holmes
It’s a shame we never got to hear an original Ozzy record from him. I thought he showed such promise but never had the chance to develop within the band.

5 Gus G
A great new find. I really look forward to hearing what Gus does with Ozzy over the next few years.

Your turn now. You can enter your top fives in Ozzy Guitarist Thread on the MetalTalk Forum. I’d be curious to know your thoughts too…

…and finally, remember it’s not just a guitar hero that makes a great band, so credit where it’s due…

…and of course the one and
only Ozzy Osbourne on lead vocals!

SIXTEEN PRAYERS FOR THE DYING BY IRON MAIDEN 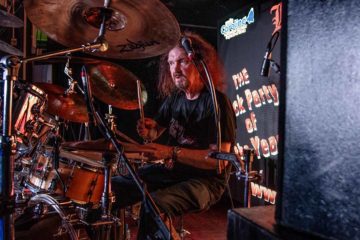