Magic beings, not magic beans I explained to my friend. She’s got visions of Jack and the Beanstalk, Ogres and Rock ‘n’ Roll. She’s not far off… keep taking the tablets – in fact, pass them around…

and in a parallel universe…

“Wait – I do wear stripey socks, but they’re under my boots…” confirms Steve Lynch. Well that’s a relief. I’ve always thought that Steve radiated some sort of magic, after all he did write ‘Turn Up The Radio’ when he was in Autograph.

I listen to Autograph and then decide to quiz Steve about his recent activities… school? You have your own school? We’re entering the realms of make believe here… why would you want your own school, I ponder. I can understand opening your own chocolate factory but a school…?

“It’s a guitar school” he says. A school of rock as opposed to a stick of rock! Nice – how sweet.

School has never been a pleasurable experience for me so what’s so good about his? “It’s a guitar school” he chides. A school for guitarists. A school full of would be widdlers and egotistic melody makers. A St Trinians for guitarists. I have a vision of future Angus Youngs. I vow to see a doctor soon, very soon, in fact now. 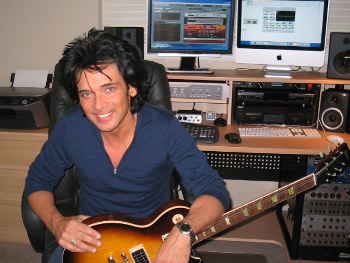 Steve has a music school in Seattle and has Lynchclicks.com where you can learn his techniques on line. I ask why a music school?

“So I don’t have to tour” Steve answers. I can relate to that.

I ask him about his teaching and I’m pleased to hear that he actually teaches one on one.

“It’s always one on one. The student gets more out of it that way!” A masterclass on his ‘hammer on’ guitar techniques with eight fingers. What do the other two do? I want to ask but don’t. The fear of detention is too great and extra lessons do not appeal.

I delve into his thoughts and quiz him about his past life.

“I sometimes miss Autograph days but I prefer my life now. It’s much more under conrol”, he laughs. I imagine schools tend to follow time-tables… mtf

Then I probe him about teaching and exams. “No exams – I just teach songs and theory”. No exams!!! I’m changing my mind about this school.

I ask him “will you teach me to play guitar.” I know he’s perplexed… “I’ve got stripey socks” I insist… All he has to say is “sign in please.”

From Autograph to teacher with many accolades along the way, songs on Grand Theft Auto, Music School, books, guitar clinics… I ask him about his greatest achievement.

“Being an internationally reknowned guitarist” he quips. Can’t argue with that. Now where’s that guitar? And you lot pay attention! Me I’ve got songs to learn and a teacher to find…

Elsewhere on a parallel universe, far from sanity, Gary Moat thrashed his drum kit to bits at the Cherrytree club in Peterborough last Saturday. I was reliably informed that he was in possession of a pair of stripey socks…

I was also told that Mr Moat was nothing short of ‘magic’. Andy Green provided the guitar racket and Mr Andy Pacey the pulsating bass… collectively the Black Rose or Black Death, whatever you choose!

Their vicious rendition of Accept’s ‘Balls To The Wall’ was a crowd pleaser… I tell you it’s all in the socks! Or the pants if you are Clive Edwards…

Watch this space for more musicians in socks.

Click here for Lynchlinks and loads more about Steve Lynch.

The new line-up of Judas Priest with Richie Faulkner on guitar performed for the first time on Wednesday's (25 May 2011) American Idol finale.They...