This tour has been making all the right noises in all the right places this month and all three bands had clearly reached peak performance for the expedition’s final night in London at a very well attended Highbury Garage.

Atrocity are daring and heroic Germans who took brutal Metal to new heights of madness and acquitted themselves perfectly on the night while Leaves’ Eyes, with their marvellous circle of devoted followers, killed us softly.

And once again, the mighty Pythia were adamantly passionate with a tallismanic display that asks questions about the past and whose essence is beyond our wildest imaginings.

Atrocity’s pacing is swift and the dialogue sharp and realistic. Lock eyes with dressed in black frontman Alexander Krull – who also doubles as Leaves’ Eyes vocalist alongside Liv Kristine – and you will not get him out of your mind.

Krull’s voice is as big as Himalayan mountain Chungawat and Atrocity’s music is full of passion, obsession and sacrifice. This band could be the death of you.

The standout song is ‘Death By Metal’, Atrocity’s very own anthem, and parallel with ‘Satan’s Braut’, ‘Haunted By Demons’ and ‘Reich Of Phenomena’, this is a set that is a real frightener and absolutely takes you by surprise. 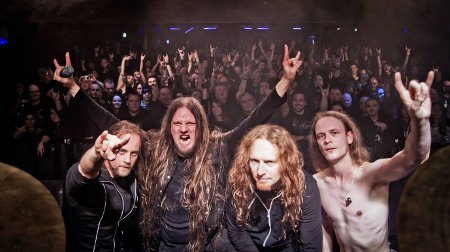 There are indifferent bands, embarrassing bands, nasty bands, good bands and great bands but Pythia are an obliterating, overwhelming band.

Plenty has been said about Pythia within these pages but tonight was mysteriously threatening as Pythia’s line-up has changed dramatically. Guitarist Tim Neale and keyboardist Rich Holland have departed (led down the yellow line) and been replaced by Oz Wright and Marcus Matusiak respectively.

Any concerns that the changes would have an adverse effect were washed away instantly as the new line-up delivered a rhapsodised display that, even more than previously, delved into your thoughts as skillfully as the settings of passion, rapture and terror were described.

Frontlady Emily Alice continues to expertly lead her audience towards willing subjugation and her comrades stand behind her, as imposing as the Gemini Ridge.

Collectively they send out frightening signals that correctly imply that their ascent to the top is now unstoppable.

Still you weave your magic further, And I find I’m bound to you, Still the magic flows and burns…

Isn’t it strange how dreams fade and shimmer sometimes, like we are sailing a restless sea, from a memory, a fantasy.

And as Liv Kristine extols the virtues of her Norwegian homeland and Viking conquerors and adventurers, the wind carries us into white water and you see a picture by the lamp’s flicker.

Liv and Alexander roam into far off territory both musically and sonically and stories unfold as they walk through foreign ground.

You are left thinking after this aesthetically rousing set whether a new romance could ever bind you but there’s no need to seek sanctuary here as you just need look over your shoulder and gaze at the shadow.

To see Leaves’ Eyes is to adore them as the emotions manifest themselves like tears falling from a ruined face and seeping through fingers. In extremis.

Pythia won the day, Atrocity were simply Teutonically magnificent and Leaves’ Eyes were the Cheri on top of the cake. Look out for the new Pythia album which will hopefully be released late Spring.

Previous article
CILICE: UK TECH-METAL FEST TRIPLE THREAT
Next article
The Grammys Have Been Awarded At The 56th Annual Ceremony