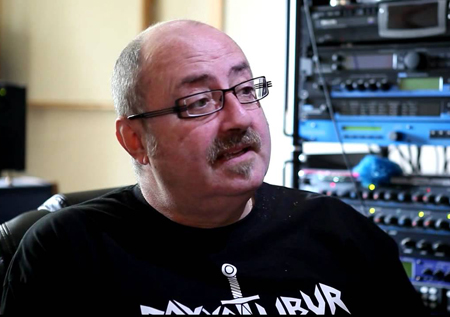 “It is with complete and utter sadness that I need to tell you all that our beloved father and my mums best friend Chris Tsangarides passed away peacefully last night after another brave battle with pneumonia as well as heart failure. We really are appreciating your messages of love and kindness but we are struggling to reply to them. With all our love and thanks from us all. Jane, Theo, Louis, Paris, Samantha and Casey. We’re gonna miss you everyday of our lives.”

He also worked with many pop and alternative artists including Depeche Mode, Tom Jones, Joan Armatrading, The Strawbs, Concrete Blonde and The Tragically Hip.

He was credited for a guitar recording technique called “the vortex”, which he first used when recording John Goodsall’s guitar for the Brand X album ‘Moroccan Roll’ in 1977. He later refined the technique, which gives a random panning effect to the recordings, similar to a reverb but obtained through a particular placement of microphones.

He started his career in the music business in 1974, as an apprentice at Morgan Studios in London, one of the major independent recording studios in the UK at the time and became famous on the hard rock and Heavy Metal scene for the quality of his work and for having produced signature albums by major bands.

When Morgan Studios 3 and 4 were acquired by Zomba Management in 1980 and rechristened Battery Studios, Chris became part of a team of in-house producers which included Mutt Lange, Martin Birch, Tony Platt and Nigel Green.

At the beginning of the 2000s, Chris had his own music company called Rainmaker Music, which included a recording studio with the same name in South London. He went on to open a new recording facility, Ecology Room Studios in Kent, as well as a new record label, Dark Lord Records, which he formed with The Strawbs frontman Dave Cousins.

Chris is a huge loss to the world of Heavy Metal and our thoughts are with is family and many friends and colleagues.