As the lights go down and the chants of “DragonForce!” echo around a packed Kentish Town Forum it’s clear this is going to be a great night. With a new album bursting full of melodic, anthemic choruses, a giant dragon behind the drum kit and two huge arcade cabinets showing 80s video games, you couldn’t be watching any other band.

Openers McRocklin & Hutch set the tone with a short set of instrumental uitar and synth driven sounds inspired by the 80s, before diminutive power Metal giants, Lovebites, hit the stage. Delighting the crowd with some head-crushing Heavy Metal, this all-female five-piece from Japan almost steals the show.

New song ‘Signs Of Deliverance’, from their forthcoming third album ‘Electric Pentagram’, out in January, suggests this will be an intriguing and very heavy 2020 release. Watch out Maiden, Priest and the rest: these ladies are coming for you! 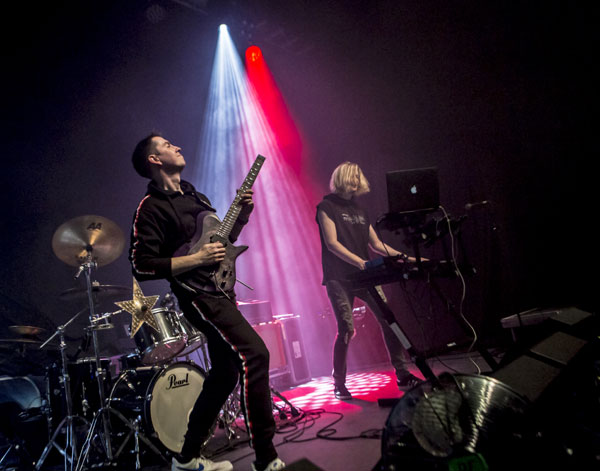 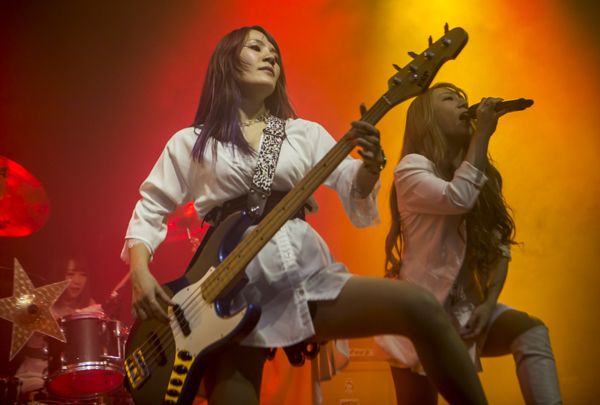 Mixing the ridiculous with some serious musicianship is one of DragonForce’s strengths and tonight it all comes together in a sublime mix of video game appreciation and speed-Metal frenzy. With no less than five tracks from new album ‘Extreme Power Metal’ making an appearance, and a whole host of new fans from the Twitch online streaming platform (20,000 or so who are watching the show via Herman Li’s Twitchcam), it’s a great time for the band and they’re clearly having a lot of fun.

Opener ‘Highway To Oblivion’ sets the crowd on fire before the epic ‘Fury Of The Storm’, a classic from the ‘Sonic Firestorm’ album, lifts the roof. Herman Li and Sam Totman as always look effortless when playing the insanely fast riffs and solos and are note perfect, while Marc Hudson has grown into the ideal frontman for the band and is in superb voice. He’s completely mastered the earlier material, as has drummer Gee Anzalone who seems to be having a great time behind his huge drum kit. 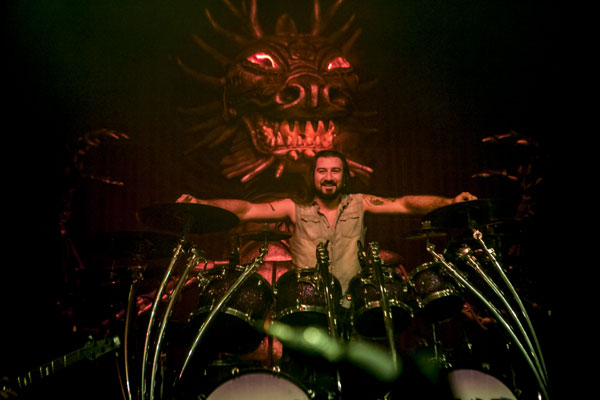 It’s ‘The Last Dragonborn’ however which illustrates where the band have found their niche. Based on the video game ‘Elder Scrolls V: Skyrim’, the crowd goes wild with recognition and sings along to the entire song. The video game link is continued with Marc Hudson himself taking to the guitar to play a medley of themes, before Sam Totman appears onstage with a banjo to play a speed-Metal cover of the Farming Simulator game music, backed by Herman Li and the Lovebites ladies! It’s so relentlessly silly that it’s virtually impossible not to enjoy. Plus no banjo has ever been ‘Dragonforced’ in that way before.

It’s back to business after that though with some absolutely brilliant setlist choices: ‘Black Fire’, another absolute classic from the early days, new track ‘Razorblade Meltdown’, crowd favourite ‘Cry Thunder’, the epic ballad ‘Remembrance Day’ and signature track, ‘Valley Of The Damned. It’s not just Marc Hudson’s excellent vocals on show tonight however as there’s a new bassist in town. After the departure of long-term band member Frédéric Leclercq, Damien Rainaud who also produced the ‘Extreme Power Metal’ album has stepped up and made the slot his own on this tour. 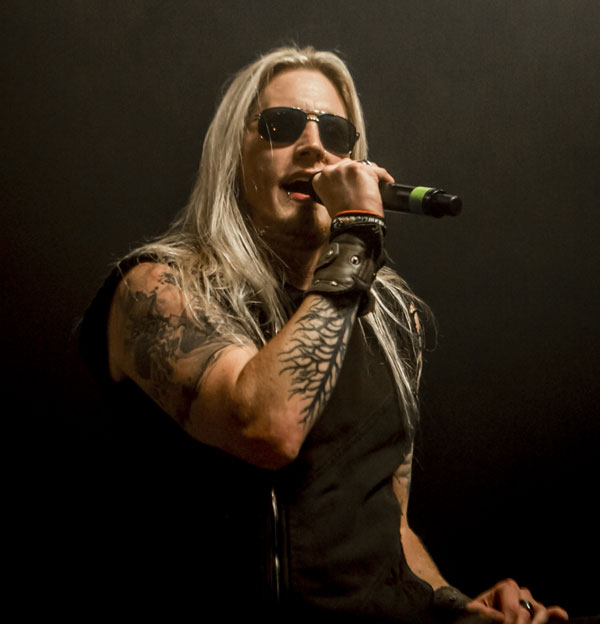 If you’re wondering how to raise the energy for a big finale, it’s easy. Just come back on to cover Celine Dion’s ‘My Heart Will Go On’. An inspired cover choice and on the new album, this song quite bizarrely fits the band like a glove. It could be one of their self-penned ballads and it’s an absolute riot. Marc Hudson even suggests the crowd need a “Celine Dion circle-pit”, definitely something you don’t see on an ordinary night.

Then of course there’s the ‘big one’ to finish. With over 100m views on YouTube and gamers all round the world destroying themselves to play it on ‘Guitar Hero’, ‘Through The Fire And The Flames’ is a great closing tune and perfectly finishes a really fantastic night.

A hugely entertaining band, DragonForce have really found a new lease of life on this album and tour and seem to be effortlessly winning over a new generation of virtual fans with some great live performances and pioneering streaming access.

Setlist:
Highway To Oblivion
Fury Of The Storm
The Last Dragonborn
Ashes Of The Dawn
Heart Demolition
Marc Hudson video game medley on guitar
BanjoForce – Sam Totman on banjo, Farming Simulator with Lovebites
Black Fire
Razorblade Meltdown
Cry Thunder
Remembrance Day
Valley Of The Damned
My Heart Will Go On
Through The Fire And The Flames 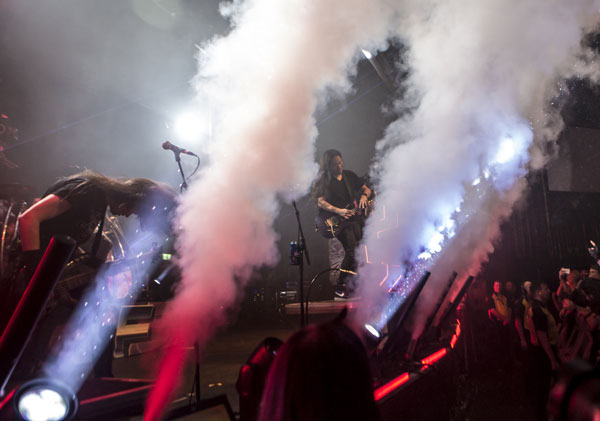 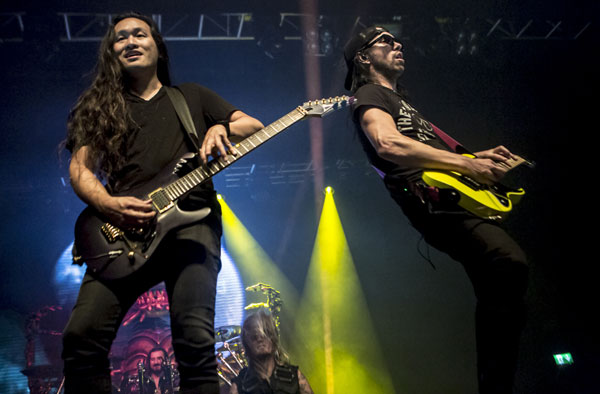 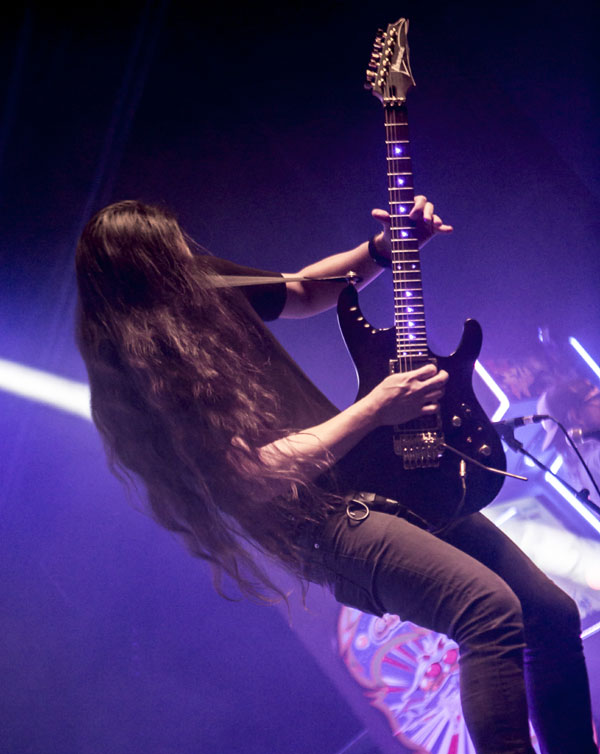 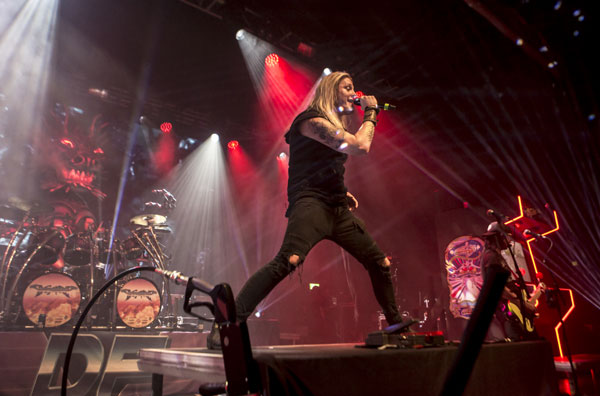 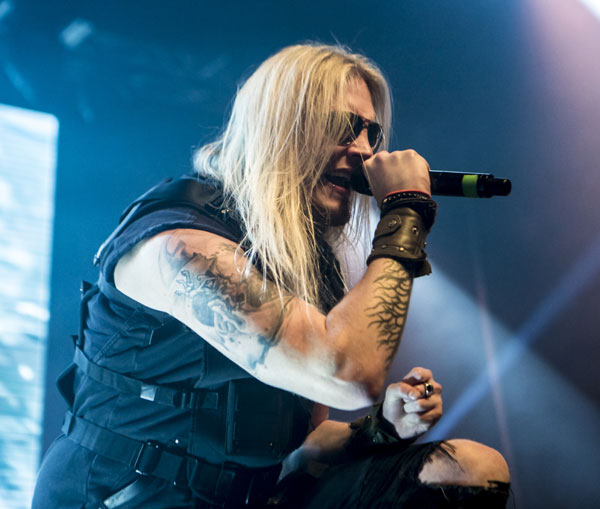