Graham Bonnet hit the big time worldwide when he was the surprise choice to replace Ronnie James Dio in Rainbow for the more commercial sounding ‘Down To Earth’ which spawned two Top Ten singles in the UK plus it earned the band a headline appearance at the first ever Monsters Of Rock Festival at Castle Donington in 1980.

However it started a trend for Bonnet to fall out with guitar virtuosos ,with Ritchie Blackmore disliking the vocalist’s style of short haircut and dapper clean suits which eventually led to his dismissal.

After recording a solo album ‘Line Up’ which also included another massive hit single in ‘Night Games’, Bonnet then joined the Michael Schenker Group for 82’s ‘Assault Attack’, however Bonnet wrote his own marching orders after just one gig when he infamously got his todger out on stage.

Undeterred Graham Bonnet set up camp in America and started to form a band very much in the vein of Rainbow.

He soon hooked up with New England members Gary Shea on bass and keyboardist Jimmy Waldo. Joining them was later day Iron Butterfly drummer Jan Uvena,but the real master stroke was finding a young Ritchie Blackmore clone from the band Steeler in the relatively unknown Swedish guitarist Yngwie Malmsteen who was barely out of his teens.

Alcatrazz was formed, having to put an extra Zee onto their name to avoid confusion with the NWOBHM band of the same name.

‘No Parole From Rock N’Roll’ 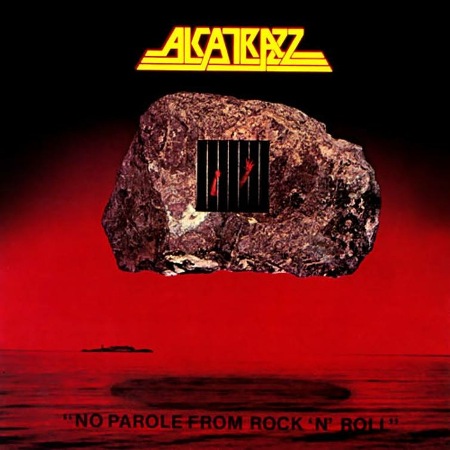 Co-writing the majority of the tracks with Malmsteen, Alcatrazz released ‘No Parole From Rock N’Roll’ to an unsuspecting public in late 1983. A couple of MTV videos helped to propel the album into the Billboard Hot 200 with commercial sounding ‘Island In The Sun’ and the excellent ‘Hiroshima Mon Amour’ featuring some stunning fretwork and solos from Malmsteen which helped Alcatrazz smash into the Japanese market, who immediately took to the band.

‘Jet To Jet’ has an almost identical opening riff to Rainbow’s ‘Spotlight Kid’ but is still one helluva belter. ‘Kree Nakoorie’ and ‘Big Foot’ both have that atmospheric heavy epic sound so reminiscent of early Rainbow.’Too Young To Die, Too Drunk To Live’ is more of a Schenker styled song that really gallops along at a hard driving pace.

‘No Parole For Rock N’Roll’ is the perfect addition for anyone who loves Bonnet’s work on ‘Down To Earth’ and ‘Assault Attack’. For Malmsteen fans this collection is a must have. This re-release comes with added bonus of instrumental demos of all the the tracks where you can try your best Graham Bonnet impersonations karaoke-style. 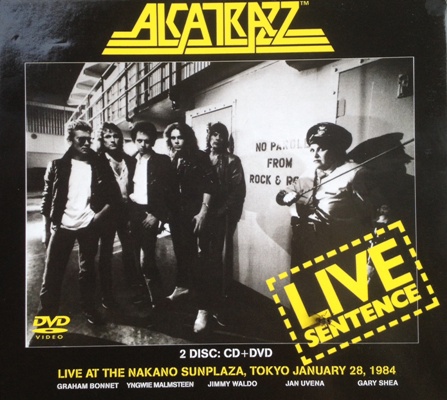 Capitalising on their success in Japan, it was decided that Alcatrrazz would record a live album in The Land Of The Rising Sun. All the dates in Japan of early 1984 were recorded but the tapes from the Tokyo show were perceived to be so good they only used the recordings from this show.

Recorded at the Nakano Sunplaza in Tokyo on January 28th 1984, the originally vinyl release only featured 9 songs with a running time of just under 40 minutes. Thankfully this deluxe reissue has the full set restored in its correct running order.

As you’d expect, the bulk of the show was made up of tracks from the ‘No Parole From Rock N’Roll’ album but it also included versions of Rainbow’s ‘All Night Long’, ‘Since You’ve Been Gone’ and a brutal ‘Lost In Holywood’.

Bonnet’s solo single ‘Night Games’ is also in the set as is MSG’s ‘Desert Song’ along with a wealth of Malmsteen solos.

Just a shame that Gary Shea or Jimmy Waldo couldn’t convince Bonnet to do a version of New England’s ‘Don’t Ever Want To Lose Ya’ which I’m sure Alcatrazz would’ve done with full justice.

A clash of egos ensured a split between Bonnet and Malmsteen soon after this tour, largely because Bonnet felt that Malmsteen was trying to overtake the show with his solos, but these two releases are a fitting document of what might have been.

Yngwie Malmsteen went off to start his Rising Force while Alcatrazz were then joined by another relatively unknown in Steve Vai from the Frank Zappa band.