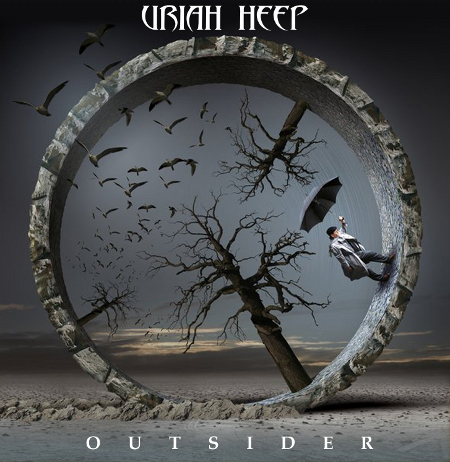 This legendary Heavy Metal band celebrates their 24th studio album by unveiling a truly strong release.
I was genuinely surprised by how good this album was due to the length of time they’ve been Rockin’ our souls. The keys shimmer to a barrage of melody and accessible arrangements, solid and cohesive instrumentation bounces along to a strong vocal delivery from Bernie Shaw. All the pieces fit together still after all these years with a line-up including founding member Mick Box on guitar and providing vocals, Phil Lanzon on keys, Dave Rimmer plucking bass strings to the beat of Russell Gilbrook.

With Deep Purple still flying the flag of classic Rock music and producing some top tunes, it’s encouraging they’re not alone as Uriah Heep provide a lot of enjoyment with ‘Outsider’. The jury is still out regarding the chorus to ‘Rock The Foundation’ which comes across a little too cheesy perhaps, but for the majority of the listening experience you’re going to be impressed with this set of songs.

The first single ‘One Minute’ released to radio with a German version called ‘Eine Minute’ is a cool representation of what to expect. I personally prefer the radio edited version, but the album version is still going to please fans.

Occasionally you hear a radio edit of a song by a band on the radio and it shaves off a few seconds making the comparison between versions difficult, but in this instant it’s very easy to hear the difference. On the album version it opens with some gentle piano and some complimentary crooning from Shaw. The edited version kicks the door down from the very first second!

‘The Law’ marries some tasty keys from Lanzon who has been with the band since 1986 (!) with the up tempo riff and galloping rhythm section. There is a moment of angelic vocal harmony sharing an infectious melody line too which brings about a smile. After taking the law in our own hands the title track continues the ebb and flow of melodic fury. Complete with a deadly hook and showcasing some rampant intent, the song feels trimmed of any excess indulgence and works very well.

‘Is Anybody Gonna Help Me?’ has a title you may feel will present an anthem but side-steps the listener by plodding in a slower tempo to its predecessors. It lumbers along like it has a belly full of food and a light head before producing a pleasant instrumental passage that builds the tension. I know I’ve mentioned it in previous reviews, but yet again track seven delivers with a song in the shape of ‘Looking At You’. The chorus soars to the limits of the clouds above finishing off the exposure ideally. Yum, yum!

Eventually the thundering hooves of a galloping guitar can be witnessed again with the arrival of ‘Can’t Take That Away’ which is glorious once the chorus coats the listening experience with syrup. I hope ‘Jessie’ is appreciative of being the namesake behind this track. Both ‘Jessie’ and ‘Kiss The Rainbow’ sweep the feet from under you with their precision and exquisite balance of hook and arrangement. Perhaps expecting the album-closer to be a ballad, ‘Say Goodbye’ bites and snarls quite possibly more than any of the album has until this point.

Thoroughly enjoyable, where experience and pride shine brightly is the best way to sum up how I felt after hearing this album for its umpteenth spin on my music system. Plenty of air-drums and air-guitar were evident which even took me by surprise, as you’d expect a band to be tired or somewhat dishevelled by the time they reach their 24th studio album?!

If you want to soak your ears in some classic style Rock music with melody, then this album will give you hours of pleasure. Sing-a-long moments aplenty and moments of toe-tapping delight await those who dare enter the world of the ‘Outsider’.

Speed Of Sound
One Minute
The Law
The Outsider
Rock The Foundation
Is Anybody Gonna Help Me?
Looking At You
Can’t Take That Away
Jessie
Kiss The Rainbow
Say Goodbye

Henric Blomqvist: 'All Of Your Illusions' 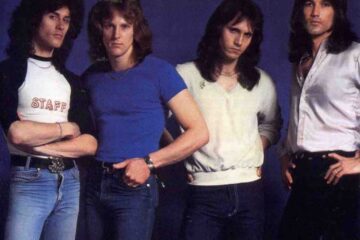