It was all looking swimmingly well when Little Angels landed the number one spot in the UK charts with their 1993 album ‘Jam’. Scarborough’s finest then went from opening stadium shows for houmous muncher Bryan Adams, sharing private jets with Bon Jovi and receiving lavish gifts from Van Halen to also rans in the bargain bin.

Thankfully that wasn’t the last we heard of the band. A couple of reunions kept those Angel wings a-flapping and talisman Toby Jepson has kept his pencil well sharpened over the years with stints in Gun and Fastway and now Wayward Sons, where he is producing the finest music of his career.

But back in 1995, a year after Little Angels officially bowed out with a sold out gig at the Royal Albert Hall, Jepson went it alone with his first solo venture. And the result, ‘Ignorance is Bliss’, was an ambitious breakaway from the jolly up Arena Rock that made his name. 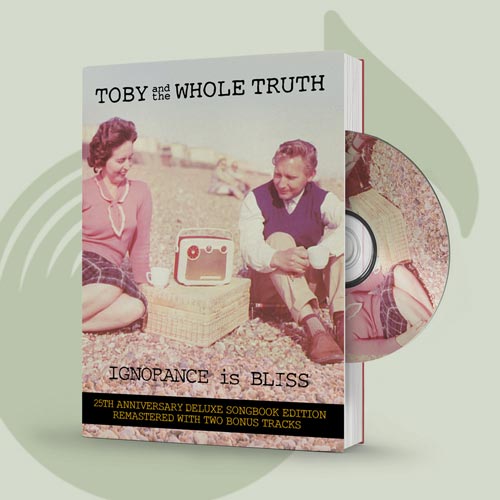 The hypnotic sway of ‘Some People Are More Equal Than Others’ dabbles in the psychedelic and immediately quashes any hope that he was heading down a familiar path.

Bear in mind this album was released when the Grunge movement held its tightest grip on the music world. And while the songs are of a more Alternative persuasion, Jepson’s natural Rock instincts are often close by especially on the Zep flavoured ‘Better Off Without Me’ and the gritty anger of ‘Haven’t Got Your Strength’.

But by and large this album is very much a dark and emotional release, with Jepson laying bare his anger and frustrations which was pretty much his only source of inspiration at that time.

All that said, the sadness that surrounded the dissolvement of Little Angels added a string to his songwriting bow that he probably did not know was there.

‘The Wind Blows Hard’ is light years out of his comfort zone but the fire in his belly ignites a thoroughly unadulterated performance.

He shows some of the Grunge pretenders how it should’ve been done with the bitter melodic tones of ‘I Won’t Be You’.

The joyous Southern touch on ‘Save Me From Myself’ masks a lot of the songs personal content, but dig deep into the lyrics and the smile may dissappear. It is still one of the albums go to tunes though.

The experimental ‘Open Your Mind’ is daringly like a cocktail of The Stone Roses and ZZ Top, blended together and garnished perfectly with Jepson’s vocal redemption.

Despite the doomery of the title, closer ‘Spiritually Bankrupt’ gives off a surprisingly positive vibe and the anthemic folk feel gives the tune just the right amount of polite protest.

‘Ignorance Is Bliss’ is a brave, raw and honest collection of songs and an intriguing insight into the mind of one of Rock music’s most unsung songwriters.

Some People Are More Equal Than Others
Better Off Without Me
Slipping Through Your Fingers
Haven’t Got Your Strength
The Wind Blows Hard
All Heal In Time
I Won’t Be With You
Save Me From Myself
Out Of Sight, Out Of Mind
Harder All The Time
Open Your Mind
Get Your Feet On
Spiritually Bankrupt