Myrath are well known for their anthemic songs, mixing elements of Progressive Metal with the history, mythology, and music of their native Tunisia. If you’ve seen their videos, you know they match their incredible artistry with equally stunning visuals, and their live stage production is no different. Truly a feast for the eyes and the ears, ‘Myrath: Live in Carthage’ takes you on a sonic journey to the far-flung corners of the desert.

Set in the historic ruins of Carthage, the concert opens to the haunting tones of Aysl, as a belly dancer emerges from the smoke on the central platform of the stage. Suddenly the stage is filled with drummers, as the intro is extended and the band takes the stage.

Opening with the explosive riff of ‘Born to Survive’ lead singer Zaher Zorgati lets rip with his iconic vocals which take everything into the sonic stratosphere. The power and the passion behind the song prepares you for what is to come.

If you have never experienced a Myrath concert before, then this is the perfect introduction to their masterful stagecraft, and now more than ever, it is incredible to have such an amazing performance to watch.

As the crowd erupts into chants of “Myrath”, the band breaks into an energetic rendition of ‘Storm of Lies’. Instantly you can hear the multi-cultural influences that make up the history of Tunisia within the layers of their music, while not being defined by it.

Their music has a unique character that takes you with it as it winds its way through your psyche and your soul, and this performance is no different. Moving effortlessly from song to song, Elen Oriental, the band’s official belly dancer, returned to give a brilliantly choreographed performance throughout the night.

However, it isn’t just songs off their two most recent albums, Legacy and Shehili on offer in this amazing spectacle, but also classics like, ‘Wide Shut’ (which features long-time Myrath producer Kevin Codfert on keytar), ‘Merciless Times’, ‘Sour Sigh’, ‘Tales of the Sands’, ‘Madness’, and ‘Beyond the Stars’.

Speaking to Zaher at last year’s World Metal Congress, he told me that the key to Myrath’s creativity is that it is a collaborative process. Every member of the band from Zaher on vocals, Anis Jouini on bass, Malek Ben Arbia on guitar, Elyes Bouchoucha on keys and backing vocals, and Morgan Berthet on drums, as well as Kevin Coldfert, come together to create the best music possible. Myrth: Live in Carthage stands in clear testament to that fact.

During ‘Nobody’s Lives’, Zaher takes to the crowd, as the audience goes wild, and he continues singing there up until Malek’s epic solo. Then, after regaling the audience with the tale of a soldier who fell in love with a queen, Zaher breaks into ‘Duat’, followed by ‘The Unburnt’, which featured imagery from Game of Thrones on the screens behind the stage.

Musically, Myrath have a compositional style that would not be out of place in a symphony. With grand sonic structures and sweeping musical arcs, they are a joy to listen to for that reason alone. Add in the lyrics, and you have a superb combination of thought provoking and beautifully written masterpieces that truly deserve far more attention than they receive.

However, Zaher took a moment to pay tribute to the band’s legion of fans, for all the support over the years, and declared that the band were happy to have finally achieved the recognition they’ve fought so hard for over the years.

As the concert expands, the band never loses any energy, and Zaher’s vocals are as on point as the moment they first took the stage.

Ending the main part of the show on ‘Madness’, the band left the stage to be replaced with a stunning solo performance by Elen Oriental, before the band returned for a high-octane version of ‘Believer’ (the live album features Deep Purple’s Don Airey on the keys for a very special version).

However, the band take it up a notch with ‘No Holding Back’, which gets the entire crowd bouncing where they stand. After a blistering drum solo by Morgan, this incredible event is brought to a close with an impressive performance of ‘Beyond the Stars’.

Sumptuously shot, the DVD really captures the intimate feel of ‘being there’ while giving you that back stage pass feel of getting up close and personal with the band.

The production team deserves as much praise for the final product as the band itself. From the lighting, filming, and most importantly, the mixing and engineering of the sound, this is really best enjoyed on a large screen with a good sound system.

Even better, is that you can take the experience with you wherever you go, as the concert was also released as an album.

This is a must have for any fan of Progressive Metal, and I cannot recommend it enough.

Global cast of 66 musicians unite for 'Together On Our Own' 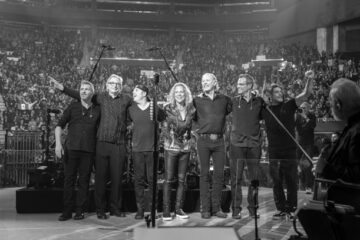