Blue Öyster Cult released Agents Of Fortune in 1976 and, while a bit more commercial than their earlier releases, it proved to be their breakthrough album gaining platinum status and unleashing ‘(Don’t Fear) The Reaper’ on prime time radio.

In celebrating its 40th anniversary, the band performed the album in its entirety on 18th April 2016 at Red Studios in Hollywood even being joined by founding member Albert Bouchard on some tracks. 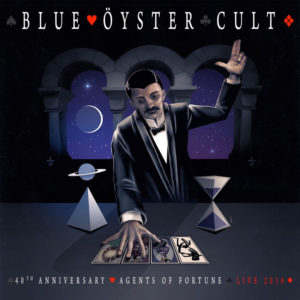 Currently hard at work on new material for a studio album that will be released in 2020, BÖC’s Eric Bloom told MetalTalk “the band is in the middle of creating new songs and recording them in between tour dates and, as they evolve in rehearsals and soundchecks, we hope to drop a song or two into our live shows soon. Everyone is involved in the writing and arrangement of the new material and we’re all excited about the prospect of a new BÖC album.”

BÖC will tour the UK in October 2020, including several shows with Deep Purple.

The Black Crowes have today announced the European dates for their Shake Your Money Maker tour. The 1990 debut release will be played in its entirety, plus all the hits too. The five time platinum album featured the hits “Hard to Handle” and “She Talks to Angels”.

Dates are on their website. Pre-sale available from Wednesday and tickets on sale Friday.

Bay Area thrash metal giants TESTAMENT have announced their thirteenth studio album, Titans Of Creation, which will be released on April 3rd via Nuclear Blast.

Chuck Billy told MetalTalk “It has been months since the final mixing of Titans Of Creationand we are eager for fans to hear it. We feel that we put a lot into this record and at the end of the day it is a TESTAMENT record that stands on its own. We are very proud of ‘Titans Of Creation’.

‘Night Of The Witch’ uses old school lyrics about witches chanting in the moonlight and casting spells. The beauty of this song is that I worked in Eric’s vocals into the chorus. I wanted to incorporate him as he does DRAGONLORD and this song was a perfect match. It is a heavy song and a great way to introduce everyone to Titans Of Creation”.

Check out lead track ‘Night Of The Witch’:

Collateral released their new single ‘Merry Go Round’ – remixed by Romesh Dodangoda – on Friday 31st January. Collateral are quite busy this year including tours with Jared James Nichols, Phil X & The Drills, Skid Row and H.E.A.T.

NAKED SIX release their debut album ‘Lost Art Of Conversation’ on 6th March. It is a briskly-bubbling stew, with hints of Frank Carter & The Rattlesnakes, bits of Nirvana and slivers of Queens of the Stone Age and Seb Byford (vocals/guitar), Tom Witts (drums/percussion) and Callum Witts (bass/keyboards) have produced an album we are a little bit excited about.

“We formed this band in a boarding school on the foggy, misty North Yorkshire moors,” frontman Seb Byford told MetalTalk, “and that special space and air around us inspired the quest for creativity and explorative thought. We’ve always looked for things that were heavy but also had a dimension, that took a risk.”

February is a busy month for Seven Sisters as they team up with Haunt for eleven dates in Germany, Spain, France and finishing up at Brofest in Newcastle, UK.