“Everything He Does Has To Be Huge”: Glenn Hughes Praises Joe Bonamassa On Black Country Communion ‘IV’

And so it is written, so has it been done. Behold the fourth installment of the New Testament of the four horsemen of the Black Country apocalypse. A rock album hewn from the hardest granite and etched with deep volcanic grooves that erupt with unbridled fire and brimstone, trampling underfoot all that dare to stray into its path.

Surely one of the best hard rock albums of the year, a precious amalgam of the Voice Of Rock, the lord of the strings, the caligula of keys and the son of the God Of Thunder.

Certainly, compared to the preceding trilogy of albums from the fantastic four, there’s a heroic continuity of style and sound that continues to draw heavily from the rich well of 70s classic rock with the modern heavy soulful edge.

‘Collide’ is a collossal bulldozer of an opening track that melds the swagger of Aerosmith and insistent balls-deep rifforama of Four Sticks Zeppelin while ‘Over My Head’ is a strutting peacock of a song. With ear-catching plumage and strident mating cry, this big bird has more strut than a penthouse full of Kravitzes. 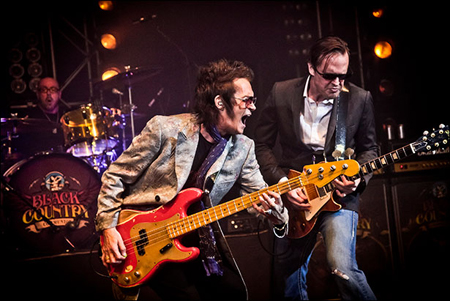 ‘Last Song For My Resting Place’ is a classic Bonamassa epic, fit to stand proud alongside ‘Song Of Yesterday’ and ‘Battle Of Hadrian’s Wall’. Joe’s voice has never sounded better on this vivid and bittersweet titanic tale.

“I’m going to make you ‘Sway'”, sings Glenn and boy does he mean it. Before long, that sway develops into a more purposeful rocking motion and before you know it’s a full body, fist pumping, headbang, such is the propulsive momentum of the track.

‘The Cove’ has a dark Iommi-eque doom laden riff that instantly summons the horror of the subject matter of the song as it builds with Joe excelling with an emotive and driven solo of indignant passion.

‘The Crow’ takes flight with a crushing Soundgarden meets Budgie riff with gloriously filthy distorted bass and battling top guitar and organ solo providing brief respite before Glenn switches on the afterburners of that majestic larynx. 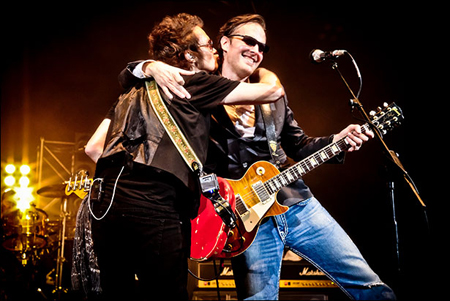 ‘Wanderlust’ has perhaps the grooviest riff of the whole album, dominated by Derek’s deft digits. Reminiscent of the insanely catchy piano-led songs in which Cold Chisel’s Don Walker specialises. I’d love to hear Jimmy Barnes go walkabout with this one.

‘Love Remains’ pays tribute to Glenn’s sadly departed mother and father and is purposeful and upbeat in tempo and style, with a moving chorus, sung with grace and feeling by Glenn that convey raw emotions of honour and gratitude.

‘Awake’ has real presence. With its stuttering Achilles heel of a riff, you can feel the broad smile of Jason’s face as he propels this funky number towards a great instrumental middle section that sounds like Perpendicular-era Purple, with Joe and Derek channeling the great interplay of Steve and Jon. 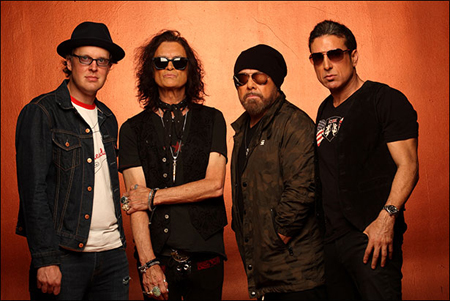 The dreamy and revelatory ‘When The Morning Comes’ is a great closing track with uber-producer Kevin Shirley creating a widescreen landscape of sound, from its gentle opening acoustic guitar to the searing coda with Joe’s powerfully understated solo and Glenn confirming that he’s nowhere ready to relinquish his crown as the Prince Of Pipes, the King Of ‘Cords and Lord Of The Larynx.

Plain and simple, this is a great rock record from top to bottom, inside and out, with every track a winner. Not content with simply basking in the afterglow of the last album, Glenn and Joe have written a worthy, hard hitting and soulful successor. It’s delivered in style, with extra hot sass and lashings of chutzpah, with every band member making their contribution count.

MetalTalk’s Mark Taylor spoke to Glenn Hughes ahead of the release at a plush hotel in London where the former Deep Purple bassist spoke highly of Joe Bonamassa’s renewed enthusiasm for Black Country Communion.

“I’ve never known Joe to be so excited about an album as this one.”

Speaking of the recording process, Hughes said about the guitarist:

“Joe showed up at 10.59am every morning eleven days in a row which is unheard of for him. Everything he does has to be huge.”

Glenn also opens up about his lyrics on ‘The Cove’ about the protection of dolphins off the coast of Japan, something that he is passionate about since becoming a vegan.

He also speaks about his belief of the afterlife following the recent passing of both of his parents.

Here’s the full conversation with Glenn.

“Everything He Does Has To Be Huge”: Glenn Hughes Praises Joe Bonamassa On Black Country Communion ‘IV’ 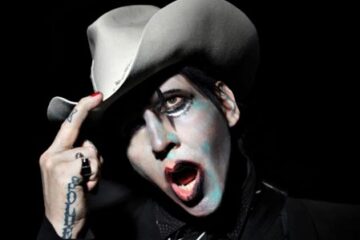