A brazen mixture of J-Pop and Heavy Metal that has divided the macho Metal scene as three cute teenage Japanese girls dressed in black babydoll dresses conquer the world with their brand of kawaii metal that has swept like a tsunami over sizzling hot coals.

Babymetal became the first Japanese act to headline Wembley and astonishingly broke the venue’s merchandise records on the night too in an absorbing show that was live streamed to a home audience watching in Tokyo.

The crowd are soon transfixed as the technical musicians Kami Band plough into their instruments as the three girls, namely Su-Metal, Moa-Metal and Yui-Metal appear in the centre of the arena for ‘Babymetal Death’ with nonstop chants of “Hai” and soon the whole of Wembley Hai in unison like part of a religious cult.

In clouds of smoke and pyrotechnics Babymetal enthral with zany dance moves whilst the crowd erupt into many crazy mosh pits. 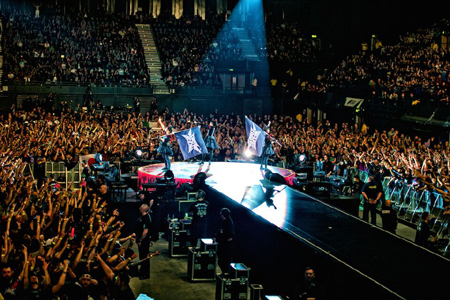 The quirky ‘Doki Doki Morning’ and the wacky ‘Gimme Chocolate’ sent the place into overdrive before things are calmed down with the unifying ‘The One’, the only song sang in English. Flags are raised for ‘Road To Resistance’ as Babymetal parade the stage in triumphant statue.

MONSTERS OF ROCK BOAT CRUISE - THE EVENT OF THE YEAR