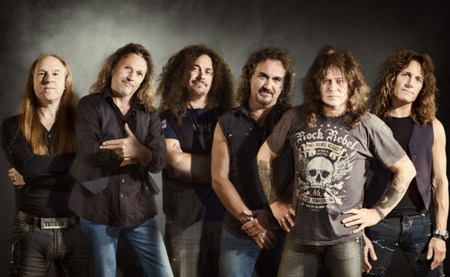 ‘Cats In Space’ have landed! A brand new band, who armed with their exciting brand of ‘Power Pop Rock’, will transport you back to the heady days of the 70s when bands like ELO, Queen, 10cc & Cheap Trick ruled the airwaves.

The band is formed entirely of musicians with a wealth of experience – writers and performers with an impressive musical CV including The Sweet, T’pau, Ian Gillan, Asia, Robin Trower, 10cc, Arena, Moritz , Airrace & Statetrooper, to name but a few.

Cats in Space’s debut album, ‘Too Many Gods’ is released worldwide in October 2015, with a single ‘Mr Heartache’ preceding it on 1st September. The single is co-written by founder member of the band and guitarist Greg Hart & lead vocalist of 1Occ, Mick Wilson and also features a guest appearance by legendary Glam Rocker Andy Scott from ‘The Sweet’ on both vocals and guitar.

The creative partnership with Mick Wilson extends throughout the album, with Mick not only co- writing several tracks, but singing backing vocals throughout, as well as featuring as guest lead vocalist alongside Paul Manzi (Heavy Metal Kids, Raw Glory) on two tracks.

The band recruited legendary producer and orchestral genius Mike Moran for the album, famous for many musical contributions including Freddie Mercury’s ‘Barcelona’.

Mike arranged and scored an 80 piece orchestra for the 7 minute epic ‘Greatest Story Never Told’. With soaring skyscraper vocal harmonies, hook laden choruses drenched in guitars, vintage synthesizers and orchestrations, the band pull no punches in delivering their symphonic power pop rock and enjoy wearing their influences on their sleeve.

Greg says, “It was always my ambition to write an album that truly reflected my musical passions & influences and to explore my love of classic 70s music. I wanted to create a new album but with a classic vibe and sound, embracing all the bombast & craziness of the 70s.

“This music is best enjoyed blasted out loud on a huge sound system, while enjoying the lyrics and artwork, rather than as background wallpaper, through tiny earphones as you go about your day to day business. These are songs I am truly excited about and believe in”.

Check out the first single and video from the band here: