There is a theory, supported by the likes of Steven Hawking, that there are a number of universes parallel to our own, existing side by side in different dimensions. There are many variations of the hypothesis, all equally valid and all equally as yet unproven.

One theory, supported by Dr Who’s scriptwriters, is that for every action a new universe is created, leading to a multiverse of infinite universes resulting from every chance choice you or anyone else ever made.

That takes some getting your head around so I’ll give you a metal example. I should warn you first though that there is an inexcusable pop name drop coming up. Sorry, but here goes… I was chatting to Richard Drummie from Go West the other day… 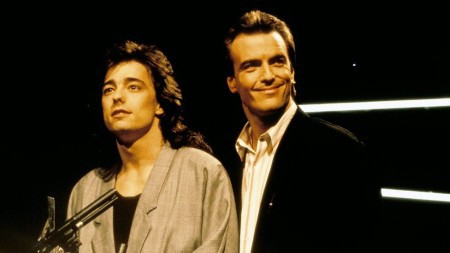 For those of you with your metal blinkers on, Go West are a British pop band that were formed in 1982 by the song writing partnership of guitarist/keyboardist Richard Drummie and vocalist Peter Cox. They had a string of UK and US hits such as ‘We Close Our Eyes’, ‘Call Me’ and ‘The King Of Wishful Thinking’ in the eighties and early nineties and are still going (West) strong today. Here’s one of their big hits from the 80s.

But back to the metal (and quantum physics), Richard Drummie and I were chatting about Iron Maiden as most people do from time to time. 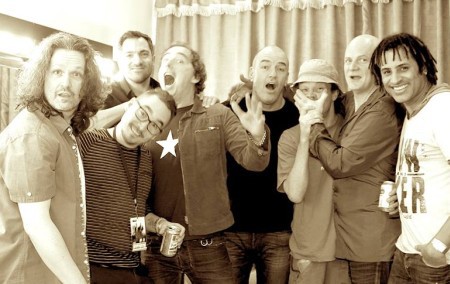 Go West trying to stop me talking about KISS again

On the occasion in question, Richard told me that he’d recently been looking at some old diaries of his from around the time he was trying to get various projects together before Go West hit the charts. He’d been trying to find singers to work with and had no doubt been placing ads in Sounds magazine and suchlike, as people did back then.

He said in one diary he had a singer named as “Bruce” noted down, a phone number and next to it he’d written “Too heavy!”.

“I wonder,” he mused “if that was Bruce Dickinson from Iron Maiden?”

He had a point. The timing would have been about right, wouldn’t it?

Richard eventually formed Go West with Peter Cox in 1982 after having worked together previously. Bruce joined Iron Maiden in September 1981 after Samson famously played before Maiden at the Reading Festival. It has since been widely publicised that Bruce was unhappy with the band Samson, due to differing professional attitudes long before the chance to audition for Maiden arose. 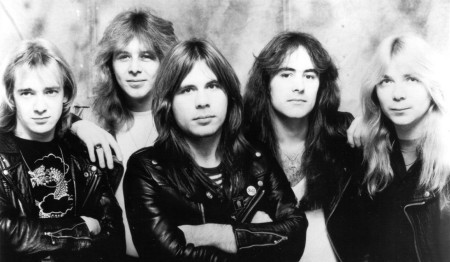 Iron Maiden with Bruce Dickinson in the centre

London based guitarist/songwriter in the early 1980s talks to London based singer. It’s possible isn’t it?

So, the next time I shared a pint with Bruce we talked about Go West (see how it works?). I asked if back before Maiden it was possible that he’d ever called a guy called Richard about a song writing collaboration or project?

That’s a tough question isn’t it? Can you remember every conversation you had in 1981? If you were old enough to talk back then…

Bruce said he had had chats with different people, some promising and some not so. But of course he didn’t remember all their names. I told him the reason for the question which of course brought a twinkle of mirth.

So, just supposing for a second that there are these infinite parallel universes where every action and reaction are recreated. There is a universe in which Bruce Dickinson joined Go West instead of Iron Maiden.

No, surely not! But really it could have gone either way in that one conversation on their landline phones. I know Richard Drummie and Bruce’s musical tastes, so this is how the conversation probably went in our universe:

Richard: “So what kind of bands are you into?”

Bruce: “I dunno, a bit of Deep Purple maybe some Fr…”

As Bruce says this Richard takes his pen and writes “TOO HEAVY!” in his diary, underlines it three times and interrupts with: “Oh, cool. I’m into more like, Smokey Robinson and stuff. But it’s been nice talking to you…”

But in the other alternate universe it could very well have gone differently. It all really depends on what band Bruce mentions first in that conversation.

Richard: “So what kind of bands are you into?”

Richard: “Oh, cool. I love Paul Rogers. Actually I’ve been talking to a guy called John Glover who used to work with them…”

And the so conversation goes on, they meet up, get along, write songs and form a band in that other universe.

I think that works really well, don’t you?

So what about Iron Maiden? Who ends up singing for them in the alternate universe?

Well funnily enough, Peter Cox the singer from Go West (he is an incredible and soulful singer too by the way) told me another time over dessert, that he was once involved in a jam with Nicko McBrain back in the day…

You see how it goes? These myriad parallel universes may contain every super group we ever wanted to see. Vinnie Vincent and Paul Gilbert? It could have happened in the universe where Fred Coury got the Invasion gig.

Back in our universe, Iron Maiden have a new album out called ‘The Book Of Souls’ and a world tour starting in Australia next year, while Go West are currently on tour in Australia and have a UK tour coming up along with Nik Kershaw and Carol Decker of T’Pau, starting next month:

I’m going to every gig. How many are you going to? 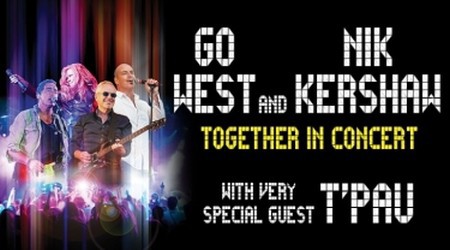 Video Credits:
The Go West video for ‘We Close Our Eyes’ (Drummie/Cox) is on their ‘Frame By Frame’ DVD. The Bruce Dickinson video for ‘Bring Your Daughter’ (Dickinson) was filmed live at the Country Club, Los Angeles CA in 1990 (with Janick Gers on guitar, Andy Carr on bass and Dicki Fliszar on drums). It is available as part of the Bruce Dickinson ‘Anthology’ DVD.