Machinage: ‘It Make Us Hate’ 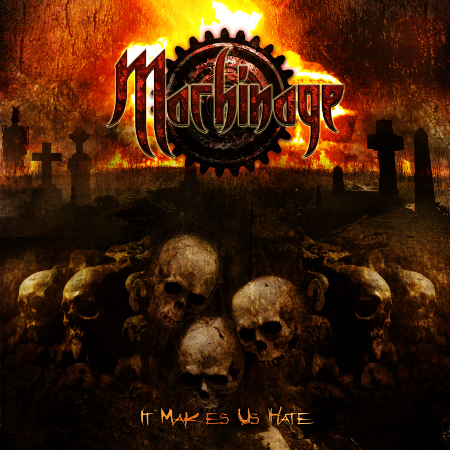 I love my job! No, I really, really do – and do you want to know why? It’s because I get to discover some bands that I previously haven’t heard of who have albums out that I’m really glad I got to listen to, and ‘It Make Us Hate’ by Machinage is one such album.

For those of you who haven’t heard of the band before, they were founded in 2007 in Jundiaí (a city in the São Paulo area of Brazil) by Fábio Delibo (on vocals/guitar) and guitarist Fernando Kump. In between various line-up changes, that band self-produced this, their debut CD which was originally released back in January 2012.

During that time, the band set about building their fan base and have been sharing the stage with such Metal luminaries as Overkill, Sepultura, Nuclear Assault and Dismember. So, how does the CD sound, then, I hear you cry?

Well, it’s nine tracks on full on Metal that is an absolute blast from start to finish. I’ve been listening to it on and off for over a week now, and it just gets better with every listen. The band describe their music with three words: “Heavy”, “Speed” and “Melody” but when you add in great production with supreme musicianship, and you end up with something as polished as this, it’s really hard to believe that this is only their first album!

‘5 Beliefs’ has a very Megadeth feel about it with the slow but tuneful guitar intro which blends nicely into the main guitar riff before the relentless drumming provided by Ricardo Mingote really sets the track on fire. The opening vocal lines from Fábio Delibo even sound like Megadeth mainman Dave Mustaine and you can almost imagine Delibo scowling Mustaine-style as he utters the first few lines.

‘Anguish’ gives bass player Adriano Bauer his chance to shine in the intro before the main riff takes over and produces another quality track. 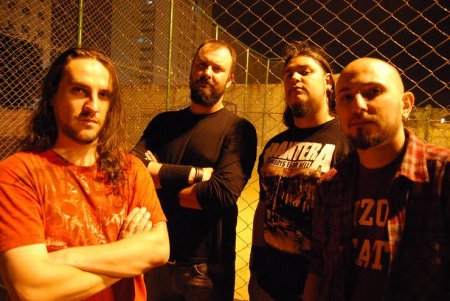 If I had to choose a favourite track on the album, it would be ‘Cold 3rd War’ without a doubt. From it’s sound effect intro through the killer riff and the almost chilling spoken samples from the two American announcers reporting the dropping of the atomic bomb on Hiroshima and talking about the threat of a third World War that sets up and closes the song is just genius.

Again, Delibo works his way through the vocal lines without missing a beat and scarcely stopping for a breath – great stuff, whilst the guitar solo is just full on Metal from start to finish. It may not be the longest son on the album, but it checks pretty much every box in the Metal song checklist and is a song that the band should be justifiably proud of.

Addendum: The band are currently recording the follow up to ‘It Make Us Hate’, however, guitarist Fernando Kump has now left Machinage, and they have recruited Ricardo Macan to the band in his place – so look out for their new album later in 2013!

You can watch the official video for ‘Is This The Way’ here:

Tracklist:
Rise Of The Souls
Next Victim
Envy
Anguish
Mask Behind Some Lies
Beliefs
Cold 3rd War
Is This The Way?
Tides Of War

Machinage: ‘It Make Us Hate’