To coincide with KILLING JOKE’s gigs this week, PIPPA LANG recalls her radio interview with JAZ COLEMAN during the recording of ‘Absolute Dissent’. Much ranting about Bono, England’s lack of revolutionary backbone, and shape-shifting reptiles. David Icke, Tony Blair, Bono: watch your backs…

“I’d like to see Bono’s head in a fuckin’ basket!” Jaz roars malevolently at me, as if I’m ten and gonna run and hide behind the nearest safe object. But I’m not ten, so I smile as benignly as possible at the startling sight before me: Killing Joke’s frontman.

Startling, because Jaz’ infamous noir charisma isn’t entirely contrived by onstage make-up, lights, quirks of performance and the like; these synthetics merely complement nature’s design: the jet black hair and eyes, the hawklike nose, the fanatically intense set of features.

It is November 2009, and Killing Joke are hard at it in London’s Britannia Row Studios recording that particularly poignant album, ‘Absolute Dissent’. Poignant because it was, of course, the first in twenty years recorded with the original line-up: Jaz, Youth, Geordie Walker and Paul Ferguson.

So successful was the reunification (personally, that is, sod statistics) that now, in 2011, they’re recording another album – and playing a smattering of UK gigs this very week as a prelude to world domination. It’s no accident they’re playing The Royal Festival Hall on Friday, April Fool’s Day. The album’s working title was ‘Feast Of Fools’ (from the old traditional Festival of Fools), the title of a track they later dropped.

So, back in 2009, Jaz is on full throttle. I’ve hardly said a word, but I am enjoying the slightly surreal notion that I’m supping tea with the Devil himself, whose voice is rising like a crescendo of thunder every couple of minutes the more outraged he becomes (is the sky darkening too? I wonder). About what, exactly, is he outraged? Well, everything it seems, starting with, indeed, Bono:

“Bono and his old boys’ network – pah! – I know what he’s creeping out to do, flying round the world in his big jet, did you know he’s earned over one billion pounds tax-free?! This guy is not fit to even talk, and wearing those stupid fucking sunglasses all the time, he’s a phoney, he’s a fraud, I’d like to see him up in the dock with Tony Blair, for war crimes!”

Steady on old chap! What, exactly, got Jaz started on this political topic? Evidently something before he walked into the room (upstairs from the studio at Britannia Row) or, perhaps, nothing. Jaz just loves a good rant, that’s all.

Which is great, because all I have to do is sit back and watch the drama unfold. Youth, thankfully, will be filling me in on more pertinent, album-orientated issues later, so I have no need to try and coerce any information out of Jaz. I sip my tea and let nature take its course:

“I would like to make it very very clear,” Jaz continues, and I can hear the contempt in his voice. “Bono is no spokesman for our or any generation, he’s a nasty little Irishman who drinks a thousand pound bottle of wine a day, quotes Ghandi and tells you to spend your money on charities while he upstages the G8 event at Gleneagles with that mate of his, that mick who wears a medal to parties!”

I spew tea all over my jeans at this point. Oh, how I’d love to see Jaz Coleman do stand-up!

“These people are not spokesmen of any generation, they are morally inferior people. I invoke the revolutionaries of the French Revolution who set stringent limits on economic growth! Do you know I left this country because it has no history of revolution!”

I thought he left the country to go to Iceland and avoid the Apocalypse, but I don’t mention that. Instead I grasp the passion play before me, press ‘pause’ and ask him a completely irrelevant question; “Do you ever watch yourself on video?”

“Never!” booms the God of Thunder (sorry, getting a bit carried away here). “I am repulsed by the sight of myself!” and I’m sure he must’ve slammed his fist down on the table at this point; or maybe I just imagined it.

I snigger, and then look at him quickly just to make sure I haven’t pissed him off. Luckily, I detect the merest hint of a smile. The killing joke: irony.

Irony plays a major part in the irascible but compelling Jaz’ dialogue. I may not be ten, but I find myself naively wondering, back in 2009, how to sieve out irony from conviction in his twenty-minute rant (which, believe me, he’s only just started).

Jaz probably has an IQ that spins right off the proverbial radar, both in terms of intellect and his capacity to run rings round those he’s in conversation with (let him loose on Question Time!)

He has a lot going on in his head, never mind Bono, war crimes, etc. Apart from his vocation as figurehead of murderous post-punk electro-industrialists KJ, my first impressions of whom will stay with me for life (the sight of one punk bottling another as soon as I arrived at a Hammersmith Palais gig), Jaz also composes operas, has commitments to the Sydney Symphony Orchestra, is Composer-in-Residence for the New Zealand and Czech Symphony Orchestras, and does quantum physics lectures with his brother…

“We all, in Killing Joke, bring something unique to the table,” he says, reminding me that they are, after all, a band.

“We crawled out of squats and educated ourselves. Paul is one of the greatest art curators, master of creating art. Youth is so many things: a great philospher, although I love him first and foremost as an artist. But he’s also one of the greatest producers there is – hands-on experience in the industry. Youth is a great teacher, he can use anything to make music, he’s fearless and shameless in his creativity.”

Funnily enough, it is through education that this interview came about in the first place. Youth came to do a ‘talk’ at Kingston Uni, where I’m studying music, one thing led to another, and here I am in this extraordinary discourse with Jaz. Youth is even honorary professor at Kingston now:

“Generally speaking,” says Jaz. “Unless you’re going into law or medicine I fail to see the relevance of universities. All they wanna do is make money out of you. I’d take my kids out of school if they were at school now, they teach them rubbish. I teach at lectures all over the place and I haven’t got a fuckin O-level to my name. It’s a load of shite.”

Interesting that both Jaz and Youth bucked the system when they were kids, but are both now educators themselves – but I guess that’s Jaz’ point. Imagine, lecturers like Youth and Jaz – who’ve actually experienced life – will make far more impact than your staid old cap-and-gown breed of bookworm, so this could be a case of Killing Joke revolutionising education! Ooh the thought.

Well, it’s only been in recent years that ‘popular music’ (as opposed to ‘classical music’) has been accepted as a serious academic module. And now Youth is bringing his technical skills to Kingston Uni – a real breakthrough.

“I like to have a diverse homeopathic crop-rotation of different things to keep me fresh,” Youth explains later in his endearingly somnambulant way, as if he’s chewing on a (Camberwell?) carrot like Dylan the Rabbit in the Magic Roundabout. A marvellous way of describing a kaleidoscopic career as lecturer, producer, record label founder, poet, book writer and bassist.

But Jaz hasn’t finished yet. While we’re on the subject of academia, he decides it’s time to mention his dear friend, researcher Sir Laurence Gardner, and the outrageous accusations aimed at him by one David Icke:

“The point is there’re these new age conspiracy theorists, one of whom I shall name and shame: David Icke… First he said he was Jesus. Now he writes these new age books where he says the Queen of England is a shape-shifting reptilian!

“Essentially I’m a Republican and I don’t have a lotta time for the Royal Family, but I respect the royals of this country, and I think these ideas are dangerous. I mean this guy can sell out six nights at Brixton Academy with the likes of Robbie Williams and Oasis all going along and listening to this guy who’s saying that some people in the elite are shape-shifting reptilians.

“Reason I bring this up is that he’s accused my dear friend Sir Laurence Gardner of being one, and a member of the Illuminati, which doesn’t exist anymore. He reckons he sacrifices babies with the Illuminati in America. I’ve worked with Sir Laurence for fifteen years, he did my Libretti for my first opera at the Royal Opera House, and the guy is so stressed out by all this, he even took his passport to the police station to prove that he’d never been to America, let alone gone out there to sacrifice babies!

“The problem is most impressionable young people think Sir Laurence is a baby killer, a shape-shifting reptilian, and when I’ve talked to people about this and said “hang on, this guy is taking a lotta shit”, you know what they say? “Ah, but we’ve seen you shape shift, Jaz”, hahahahaha!… end of interview!”

And with that, he stands up, still laughing maniacally and pads down to the studio, swishing his scaly reptilian tail. Ooh what big teeth you have Jaz…

TONIGHT: ECLIPSE - LIVE FROM THE QUARANTINE 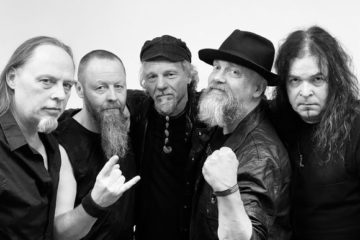