Judas Priest at the cinema? Oh yes. For one night only at the exclusive Soho Hotel screening room in central London, I was privileged to watch the new Judas Priest: ‘Epitaph’ DVD on the big screen in impressive surround sound. 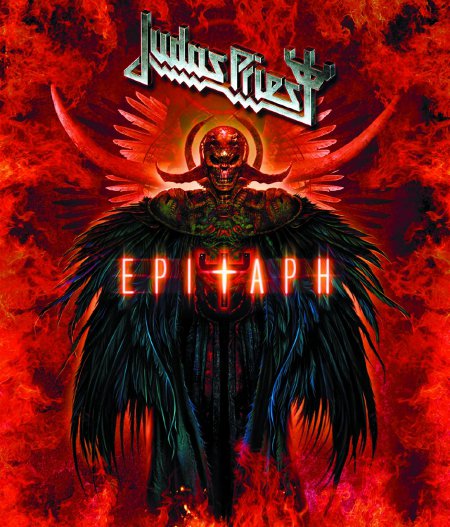 Filmed at the legendary Hammersmith Apollo, London, on May 26 2012, the DVD and Blu-Ray features 23 classic tracks covering every single (Halford-fronted) Judas Priest album, from ‘Rocka-Rolla’ to ‘Nostradamus’. It was shot on the last night of their world tour in stunning HD with a 5.1 surround sound audio mix.

MetalTalk reviewed both the Manchester and London shows on last year’s tour and you’d think there would be no more to say about this concert. Think again! ‘Epitaph’ is awesome.

Admittedly, there have been quite a few recent – and superb – Priest live DVDs to enjoy, including the ‘British Steel’ show and a release of the classic 1980s US festival appearance but ‘Epitaph’ has three key elements in its favour: The production, the set-list and the extraordinary Richie Faulkner.

Watching the DVD in a cinema really brought home just how powerful the band sound. Judas Priest deliver a jackhammer-heavy crunch which is brutally emphasised by Scott Travis’ shock-and-awe drumming. Unlike at the actual live show where the sound is all-encompassing, almost too loud, on the DVD it is crystal clear and you can hear both guitars beautifully. The drums boom but don’t overpower and Halford’s vocals are inspired, almost impossible to believe at times. The producers have done a brilliant job.

The set-list is impressive, yet for long-term fans, rather too predictable. While the previous UK tour unleashed some exquisite rarities such as ‘Sinner’, ‘Eat Me Alive’ and ‘Dissident Aggressor’, this release sees Priest playing the familiar crowd pleasers they always play, albeit with a few surprises from the 70s, namely ‘Starbreaker’ and ‘Never Satisfied’. We also get the utterly sublime ‘Blood Red Skies’, without doubt one of their greatest moments. 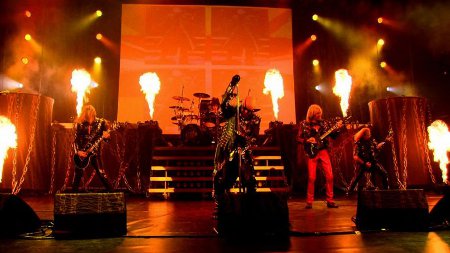 Having billed this tour as their last major world trek, the band chose at least one track from every single album (Ripper-era aside) since ‘Rocka-Rolla’. Representing almost 40 years of Metal this is a staggering achievement and there is barely a slow moment, although it was notable that during the screening most people nipped out to the bar or loo during the curate’s egg which is ‘Prophecy’.

The diversity of the tracks is a testament to the band’s longevity and it is interesting to chart just how heavy the band has become since the gentler days of ‘Unleashed In The East’. ‘Night Crawler’, ‘Painkiller’ and particularly the utterly epic ‘Judas Rising’ demand respect.

And so we come to one of the key reasons to buy this DVD. Richie Faulkner. Can it be Judas Priest without KK? Well… on paper, no… but if KK can’t be there, I am very glad Richie could step-up! He is out of this world. Right from the opening licks of ‘Rapid Fire’, you know he means business. It is not just that he fits impeccably with the band, blending imperceptibly with Glenn, but it is the raw energy he pours into every solo. He compliments KK at every turn, never imitating and yet bringing a new zest to KK’s epic wild guitar sound.

As the set-list roars through Priest’s back catalogue, Richie cuts loose on ‘Judas Rising’ before coming together perfectly with Glenn on a peerless ‘Victim Of Changes’. Glenn, playing the elder statesman, is almost overshadowed but of course saves his best solos until last!

Just when you think Richie is the star of the show, Glenn steps up with ‘Painkiller’, ‘Electric Eye’ and ‘Hell Bent For Leather’. By any standard these are the best Metal tracks of all time, but on the big screen in surround sound, they come alive. The dynamic between Glenn and Richie bodes well for the forthcoming album. 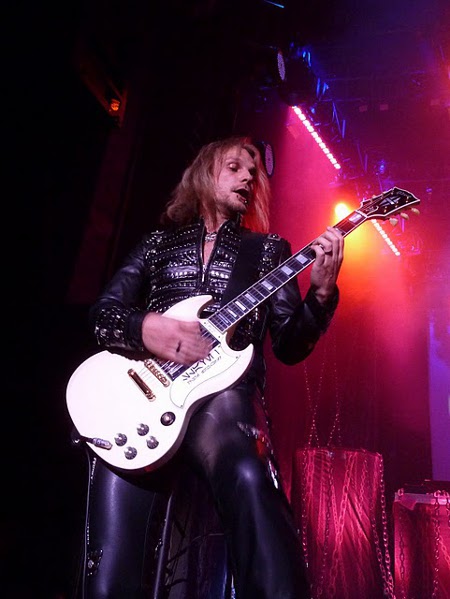 Ian Hill and Scott Travis are not taking a back seat by any means. Ian looks like he’s having the time of his life, while Scott delivers a powerhouse display of drumming which culminates in a brief solo before the ‘Painkiller’. That, and his double-kick work on ‘Judas Rising’, is enough to ensure his place as the definitive drummer with Judas Priest. What he lacks in subtlety is irrelevant because when he launches into ‘Painkiller’ it is mesmeric.

Halford of course is still the ultimate voice of Metal. His power never seems to wane and his operatic approach and theatrical flourishes make him a joy to watch. From the pop of ‘Heading Out To The Highway’, through the delicate ‘Diamonds And Rust’, the power of ‘Blood Red Skies’ and the lunacy of ‘Painkiller’, he stretches every sinew and gives it all. He is truly eternal and towards the end of a raucous ‘Living After Midnight’ he is definitely dancing! 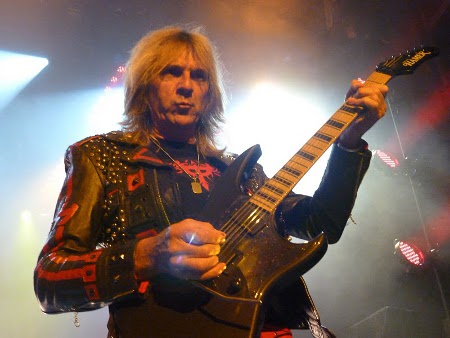 ‘Epitaph’ is out on DVD and Blu-Ray and is available in the UK now.

We’d like to thank Omniverse Vision who organised the excellent screening event and invited MetalTalk along to experience it. For the fans that came along, not only was it a brilliant experience but we were honoured by the presence of Tom Allom, checking out his own work! Watching the DVD in a cinema is great fun and if you get the chance at home, then draw the curtains, crank up your TV to 11, sit back for two hours with a beer and just enjoy.