Daniel Baker, part of Yngwie Malmsteen’s management team, has released a statement after comments made by some of the the Swedish guitarist’s former vocalists. 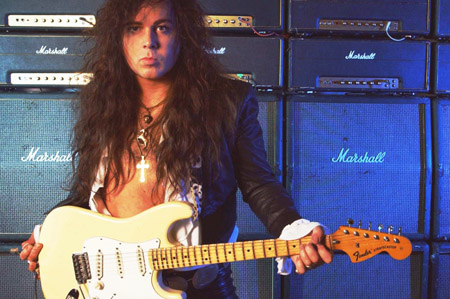 A war of words broke out between Malmsteen and his former bandmates when the axeman gave an interview to Metal Wani in which he said he had no interest in collaborating with vocalists like Joe Lynn Turner, Jeff Scott Soto and Tim ‘Ripper’ Owens ever again. Yngwie said.

“I’m very comfortable singing myself, first of all. Secondly, there’s a certain disconnect when you write the song and you have someone else sing it for you. And it’s kind of like a fakeness about it. I always wrote everything — I wrote all the lyrics, I wrote all the melodies, everything; it’s just somebody else sung it.

“And to me, the singer is nothing else than a different… like a bass player or a keyboard player — they’re not more important than any other musician. And they, unfortunately, seem to think that they are. And I’ve kind of had it with their sort of… self-absorbed sort of way, and I’m very much against it.

“Malmsteen’s statements can only be taken as the rantings of a megalomaniac desperately trying to justify his own insecurity. His claim that ‘singers’ are too egotistical is moronic and pathetic coming from him. The fact that he would lash out at all the great vocalists and respectful gentlemen that he had the good fortune and honor to work with is simply outrageous.”

Turner also spoke to The Metal Voice recently and was asked about his working relationship with Malmsteen during the making of the album ‘Odessy’ in 1988:

“He was a control freak. He has never changed or grown from that. I just pushed through – I had already dealt with Ritchie Blackmore’s difficulties and I was pretty seasoned, so I know how to get around some of those things.

“And the way to get around it is to prove yourself and to write great songs on top of his wonderful tracks. So when it all came to fruition you cannot deny it.

“Then after the record he started denying things, that he was writing all the material which is absolutely ridiculous. Cause anybody can hear that was me. So it was kind of strange, weird. The record remains being the truth; it speaks volumes.”

When asked why he thought Malmsteen was insecure today in regards to the recent negative comments he made about his former singers, Turner replied:

“It is very obvious, by saying what he said, which is totally rubbish. He is singing now and he has a terrible voice. What is the point in saying that when he really benefited by all the singers.

“The insecurity is that when you need to say something like that you are trying to justify something that doesn’t really exist which means that you are weak in some department in some area. After the fact he says he doesn’t need the singers that we are all self-absorbed which is absolutely ridiculous coming from him.

“There is no one more self absorbed than Yngwie Malmsteen. You don’t strike out against these vocalists unless you are insecure about your own future. His ego is worldwide. His statement speaks volumes. There are so many incidents I can speak about with him.”

“Can’t say I blame [Yngwie]; his vocal prowess has increased .05-fold the past two decades! Why would he want to work with horrible hacks like myself, Ripper or Joe… and deal with our egos… like wanting to hear ourselves onstage within the cavalcade of Marshalls, or getting our measly salaries on time (or at all).”

‘Ripper Owens took a swipe at Malmsteen, saying that he was “pretty sure” the guitarist wouldn’t work with any of the above-mentiond singers again “because we all quit”. The former Iced Earth frontman then added: “Let [Yngwie] enjoy the singing!”

“Firstly, we would like to apologize in advance that this statement must even be written, but it seems that some comments from past vocalists that Yngwie has worked with in the past have been getting twisted and blown out of proportion. Allow me to set the record straight.

“I think the response to Yngwie’s off-hand comments (of which his previous hired vocalists were not specifically named) has only served to prove them true — because Yngwie said something that they didn’t like, they came out enraged, spitting insults and profanities at him. This, of course, leads to the media bloating their responses and proclaiming it to be some sort of ‘feud’ when it’s absolutely nothing of the sort.

“Yngwie never mentioned any of them by name (the journalist did, however) — he merely stated that he was not interested in working with any singers anymore because he did not feel it conducive to his style of writing and performing. If Yngwie had a problem with his hired musicians having an ego, he had every right to fire them (they did not ‘quit’ or ‘leave’ as they would like to have you believe) because it was, and still is his own project. He leads and he has the final word.

“It’s very unfortunate that these past hired vocalists must resort to mudslinging and insults to elicit any kind of media attention towards them. Such classless, puerile words are ungentlemanly at best and absolutely disgraceful at worst.

“Meanwhile, these hired vocalists have been attempting to reach Yngwie throughout the past thirty-five years and to as recent as this year, have tried to reconnect with Yngwie, start projects and/or be rehired by him, among other things. At the same time, they have repeatedly spouted out these increasingly juvenile insults — a recent incident telling Yngwie to ‘sit on this’ (a picture of the vocalist’s middle finger) on social media sticks out particularly — which makes it very hard to believe their reaching out is based in any sort of goodwill. These incidents tend to increase in frequency when their attempts are not humored.

“Above all, the most laughable thing about the statements from all of these different singers is that they all claim to be individually and solely responsible for Yngwie’s success! How strange and amazing is it that they all did it by themselves? It would be slightly more believable if they had the ability to generate media coverage without attaching Yngwie’s name to themselves — but alas, this is not the case, and as such their stories only seem to be about their tantrums toward Yngwie.

“It is simply impossible, then, for one to take such statements seriously when these vocalists have sung such a different tune when dealing with our end. To literally take a picture of yourself flipping off Yngwie’s family and then right afterward show up at his concert asking for free tickets does not do a lot to instill trust. Such behavior simply comes across as being disingenuous and trying to ride on Yngwie’s coattails.

“I think that these past hired vocalists would find it in their best interests to do as Yngwie does by moving on and focusing on creating and performing new music, instead of grasping as tightly onto the past as they can.

“Thank you for your time and I bid you a good day.”