Glasgow’s finest are back. Gracing the stage to a packed-out auditorium, they launched into a blinding rendition of the opening track from their brand new album ‘Frantic’. Blinding? Yes, blinding. With a lighting rig that rivals the power of the sun, the audience was literally dazzled by the appropriately placed ‘Let It Shine’.

Bearing in mind that hardly anyone in the room had even heard the song before, coupled with the fact that Gun have taken a new direction from their established bass-heavy dark rock sound, opening with an unknown, upbeat gospel number was a big gamble which paid off big time. The crowd loved it.

Without skipping a beat the band followed with the anthemic ‘Don’t Say It’s Over’ which had everybody in the room singing their hearts out and by the time they ripped through their debut single ‘Better Days’ the room was ablaze with the ensuing cheer bringing grins to the faces of the bandmates.

Frontman Dante Gizzi described this tour as feeling like a rebirth. Sure, they have a new line-up, a new album and a new sound, but their songs have not aged a day and speaking as a lifelong fan, seeing them live felt as if they’d never been away.

Nonetheless, it was great to see them back in the saddle. He wasn’t lying when he said that there wasn’t room to swing a cat on the Rock City Basement stage and also voiced hopes of returning to the main stage next time around. Judging by the crowd reaction they should have been playing there tonight. 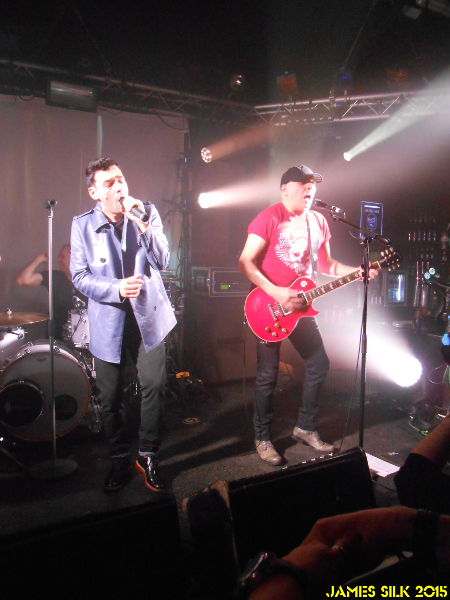 Another new track, ‘One Wrong Turn’, won the crowd over with its massive chorus before diving back to their beloved debut album for ‘Something To Believe In’ and ‘Money (Everybody Loves Her)’. It may be 25 years since ‘Taking On The World’ came out, but the army of fans still know every word – and proved it.

‘Hold Your Head Up’ is another epic slice of pop-rock with an infectious chorus, something Gun have always excelled at. It’s good to know that not everything has changed. 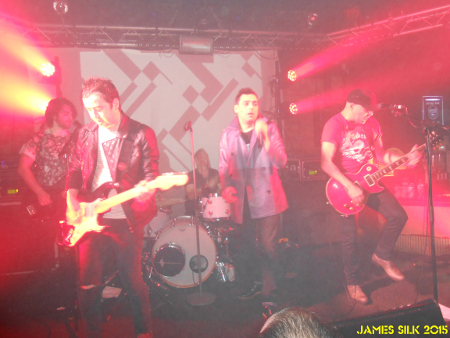 Former-bassist-turned-vocalist Dante Gizzi shines in the spotlight and it makes me wonder why it took him so long to step up to the mic as he is a born star. His vocal range is impressive too and on several occasions he reminded me of an early Axl Rose, something I hadn’t expected but which fits nonetheless. He gave it his all tonight, as did his brother Jools on lead guitar, who sweated so much from his exertions that there was a constant fountain dripping from the peak of his cap!

It’s clear that the band love playing their new material, but the rhythm section of Paul McManus (drums) and Andy Carr (bass) delivered on the classic material, with Andy doing justice to Dante’s relentless bass lines. Ex-El Presidente guitarist Johnny McGlynn is also a born performer, strutting across the stage like the son of Keef. Gun have never looked cooler.

Another dip into the back-catalogue led to a blistering rendition of ‘Welcome To The Real World’ from the second album ‘Gallus’ keeping the energy levels high as the band and crowd rocked out together, with the chorus chanted as a roar. Finally, the mood mellowed as the show slowed down with the brooding ‘Higher Ground’ from the same album. 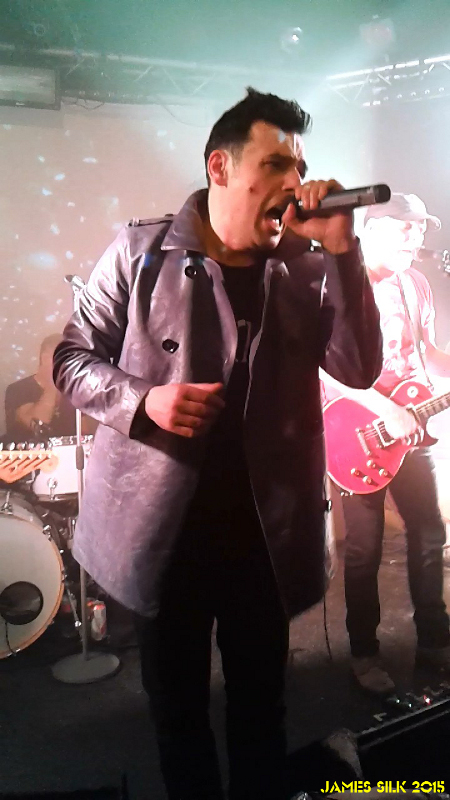 Cheers gave way to applause, which set the tone perfectly for new album title track ‘Frantic’, out three days ago on Morsecode Recordings. Gun invited their guitar tech Matthew onstage to play acoustic on the track which just added to the warmth coming from the stage. ‘Frantic’ is beautiful; a delicate yet driving love song which cannot help but lift your spirits to the heavens. By now the band had the crowd in the palm of their hand, and then the tables turned.

As Jools strummed the opening chords of the haunting ballad ‘Taking On The World’ the crowd took over and serenaded the band. Dante stepped back and grinned from ear to ear and just listened as we poured our voices into the first verse. Jools stopped playing as well and the band just stood there as we all sang the chorus, feeling the love. 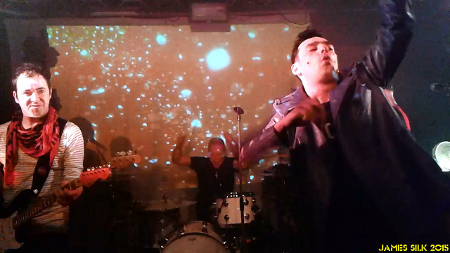 Without missing a beat the band slammed into the thudding second verse, clearly energised and appreciative of the reception. It’s moments like these that you can’t get anywhere other than seeing a great band live. The crowd took over again for the final chorus, with Dante gently harmonising and ad-libbing in the spaces, finishing to gentle applause louder than any cheer. ‘Taking On The World’ has a special place in many a heart, mine included.

‘Inside Out’, also from the magnificent debut album, had the audience bouncing again, then settling down to enjoy the show as the band launched into an impromptu jam before neatly sidestepping into ‘So Lonely’ by The Police as an ending to the track. And, as they were in the mood to do a cover, we were given ‘Word Up’. It’s never been my favourite Gun track, simply because I regard them as fine songwriters, but their reworking of the R&B classic by Cameo has always been a dancefloor favourite. 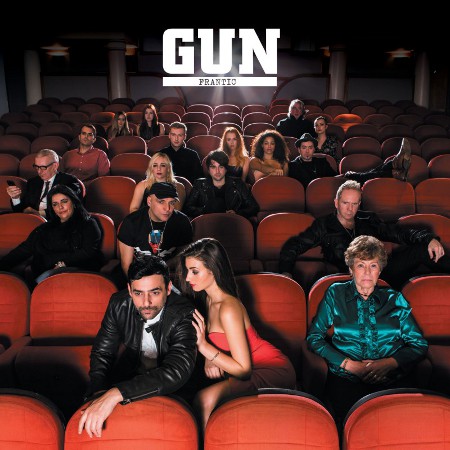 Good humour took over as Johnny’s guitar strap malfunctioned during the song, with Matthew gracing the stage once more desperately trying to reattach it as Johnny played on like a pro, contorting himself to fit.

And with that, they were gone, citing the Thursday night curfew as the end of the show. We didn’t buy it but even so, when the band returned to belt out the kickass ‘Steal Your Fire’ it’s a wonder that the roof didn’t fly off the place. Hopes of another encore were delivered with new single ‘Labour Of Life’, a ballsy, trashy pop rock affair reminiscent of T-Rex with, you guessed it, a huge hook of a chorus.

The band closed a fantastic gig with ‘Shame On You’, yet another singalong extravaganza with a new ending punctuated by pauses and stabs with Dante treating us to the full extent of his vocal range. This one little touch took me from grinning like a kid to standing there with my mouth agape in awe. Reborn indeed.