…and why your favourite band aren’t playing in your home town this year.

We had a look before at what managers and producers did for bands. This month let’s look at Booking Agents and Promoters. Who are they? What do they do? And most importantly who would win in a hypothetical fight between the two?

In short to answer the first two questions, these are the people who book the gigs that we all go to see.

Strangely a lot of people seem to think that bands pick their own touring schedules. Then they say, why aren’t my favourite band coming to my home town?

Then these people decide in their heads that the band must hate their town and by inference, the fan themselves.

Misunderstandings like this are one of the most common causes of Passive-Aggressive Fan Disorder (PAFD) whereby the fan develops an imagined personal love-hate relationship with his or her idols. This can in some cases be so intense and appear so real to the sufferer that they are mentally and in some cases physically incapacitated.

I’m mostly over that with Kiss now.

There are no known medical cures for PAFD. The only thing science can recommend is a course of cold showers and a sharp dose of reality.

Let’s have a little dose of reality right now on the subject of how bands pick their touring schedules.

A PAFD sufferer will hypothesise about a scenario whereby the band pick their own touring schedule based on whims.

Maybe they have a band meeting and look at a big map of the World with the guitarist saying “I’d like to play Madison Square Garden in New York this time. And Wembley Arena, please”.

The bass player would probably recommend Belgium, Germany, Austria and the Czech Republic purely because of their brewing traditions.

Bass players are after all, very sensible people.

Then I guess the imaginary scenario goes on with the singer wanting to go to half a dozen countries purely because he thinks the chicks are hot there, while at the same time refusing to play another half a dozen cities on the grounds that on previous occasions people had been rude to him there.

This is when the PAFD patient starts the belief that the singer personally hates him or her.

“Maybe it’s because last time I hung around outside his hotel window smashing bottles and screaming “I Love You!” till the police arrived at 5am”, they’ll think to themselves. “I bet he hates me now and that’s why they’re not playing here”.

Yep, it’s all making perfect sense (in their minds).

Finally the drummer, who in this fantasy has been silent up until now points at Madagascar on the map and says he’s always wanted to play in Japan because he likes pizza.

The manager probably takes notes in the fantasy meeting then rings up the chosen venues and the next day the tour is booked.

It’s a lovely idea, very quaint and all, but this is of course not what happens except in the movies (and in fans’ minds).

In real life, the band’s manager contacts a person called a ‘Booking Agent’. The manager tells the booking agent that his band has an album coming out and would like to do a tour to promote it.

The booking agent then looks at the different territories that the band might make money in.

Yes, sorry we’ve mentioned it already. It’s not about who screams the loudest outside the hotel window. It’s about money. That’s why its called ‘the music business’, because its a business.

The booking agent is on a percentage of the band’s gross financial take each night, usually about 15%. Fair enough, he’s doing a job.

So the agent looks at the places this band might play profitable gigs. One part of his job is to think of a sensible route in which to do the tour. For this task he uses an atlas.

It is while browsing the picture pages that he notices that Ireland, Finland and Malta have bits of water in the way. He immediately crosses them off the list. It’s not because the band hate you. It’s because the gig might not be profitable after paying the extra travel costs. Sorry. Build a bridge!

While most of us would spend a lot of time looking at the pictures (what posh people call ‘maps’) at the front of an atlas to see which venues are near each other, booking agents often seem to look in the index at the back for that information.

I once enjoyed a tour that had Barcelona, Spain and Bratislava, Slovakia as consecutive dates. On the map pages of the atlas these cities and countries are not close to each other but alphabetically in the index they are within easy walking distance.

This of course makes no sense in the practical real world but agents do not usually leave the office and have little contact with the real world.

Once he’s got an idea of a route, the booking agent calls some people called ‘Promoters’ that he knows in different countries. These promoters then decide if they want to book local shows in each territory gambling that the band can sell enough tickets to justify the gig and make a profit.

Unlike the booking agent who is on a set percentage of the band’s gross fee, the promoter is on a cut of the net fee after costs.

Usually the band will make their money from a guaranteed fee from the venue often with an additional split of the ticket money on the show if it runs into profit. The booking agent takes his cut of this sum. Then from what’s left the band have to pay for their touring costs such as their crew and transport.

The promoter is also on a variable split (with the band) of the ticket money but he must pay the venue costs before his profits roll in. A legally binding contract is then agreed and signed between the agent and the promoter.

This makes the promoter’s outlook different from that of the booking agent. Both are on a percentage of profits but the promoter has to invest money in a show to make it happen.

He has to cover costs such as hiring a venue, PA system, lights and the local crew to run them. He also pays for the band’s food and drink (which can be quite pricey if they are not teetotal) and sometimes he pays their flights and hotels.

If not enough fans buy tickets, the promoter has lost money. The agent has not actually lost cash though he and the band may not be in profit. He’s just got to pay his phone bill and internet connection while arranging the tour.

Thus it is largely in the interest of promoters to get fans to the show. A good promoter runs an online marketing strategy, gets posters put up all over town and pays local radio stations and magazines to advertise the gig. In short he ‘promotes’ the show, hence his job title.

This all costs him more money but if he doesn’t gamble it, he’s got less chance of making a profit. The larger the show, the bigger the gamble and the more he must invest to promote it. Being a promoter is a gambler’s game.

You’ll have noticed that at no point in this arrangement has the band been consulted. They very rarely are. After all how can they guess their ticket selling potential in Barcelona or Bratislava, especially if they’ve never been there before?

So the next time you’re blaming a band for not playing your home town or country, really you should be writing to your local venue or festival promoter to convince them that there’s a profit to be made by booking the band.

It’s not the band’s fault or choice.

A good local promoter with his finger on the pulse will have noticed which up and coming bands are getting good press, which ones get requested at the local rock club and which band’s T-shirts his club’s audience tend to wear.

He has to be a bit clued up to pitch his gamble at the right level. The booking agent can afford to lose the game more often than the promoter.

Some promoters only deal in big bands where the profits are pretty much guaranteed though risked costs might be bigger. Other promoters will take a gamble on small unheard of bands at their local venues. This is sometimes for the very philanthropic reason of helping young musicians but on other occasions it is with the tried and tested theory that if you throw enough shit at a wall some of it will stick.

Now onto the more interesting question of who would win in a hypothetical fight between the two.

On this one anonymous example I’m going to tell you about a local UK promoter who booked an unheard of American band for a small fee – £300 with a split of profits between the band and promoter after that.

The agent had originally asked for £400 but the promoter talked him down by 25%.

Newly signed bands with no press presence are unlikely to turn a profit for anyone, especially if they have to fly in from the USA for their tour. The promoter was taking a gamble on an unheard of band with a funny sounding name.

The promoter’s gamble here relies on local radio or press picking up on this band in between the time the concert contracts are signed and the gig being played.

For the sake of the story let’s call this promoter Glasgow’s legendary Robert Fields.

In this particular case after the contract for the show was signed and sealed the formerly unknown band (for the sake of the story let’s call them Pearl Jam) rocketed up the UK single charts singles charts with their debut release ‘Alive’.

Ow! All of a sudden they were splashed all over major music press front covers, they were on TV and got constant radio airplay.

Our promoter had struck gold! He now had a completely sold out show for £300. The booking agent however still only stood to make £45 from the event, plus a smaller percentage of any further profits from the band.

This time the promoter’s gamble paid off… 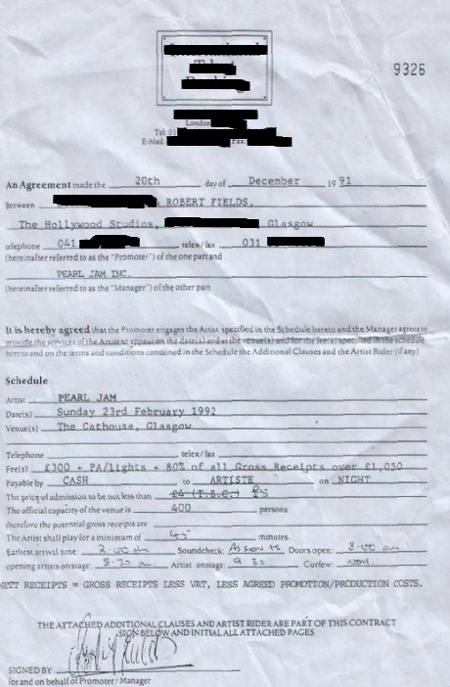 … because it’s not every night of the week that you can book Pearl Jam for £300 cash!