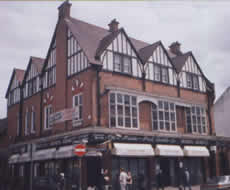 The Great Spoon, Ilford, Saturday lunchtime. The mid-day breakfasts of bacon and eggs and beer were going down well. At least fourty metallers had gathered, purely by chance, in the East London boozer and the day had started as it would carry on. It looked like being a long, long night…

A swift fifteen minute cab ride to East Ham and we were there, again, at The Ruskin Arms, for the very last and final gig ever to be played at the famous old venue. The line-up was, by general consensus, not as strong as Friday’s, but it still packed a helluva punch.

And whilst I am on the subject of Friday, Krusher Joule very kindly pointed out that in part one of this review, I mentioned that Jaguar had played when in fact they hadn’t. I missed the first two bands on Friday night but gave them a mention in the article.

Here’s what Krusher said about the early part of the evening:

“Jaguar didn’t play on Friday night, and I know this for a fact as I was really looking forward to seeing them, especially as I’d designed the cover for their album ‘This Time’ and probably hadn’t seen them since 1984 when I did it.

“Also, unbelievable but true, I was still sober when they were supposed to play.

I believe, but don’t take my word for it, that a band called the Charlatans played. They were musically going down the rock/ska road and reminded me a bit of early Madness.

“Well that was until the legendary guitarist Bernie Torme got up and played a couple of songs with them. Then it ROCKED!!!

“Also playing drums for them was Robin Guy who also plays with GMT (Guy, McCoy, Torme) – a most excellent band.”

Thanks for putting me right Krusher!

And so back to Saturday and the two evenings were billed as Clive Aid, in benefit for the charity set up to help ex-Maiden drummer Clive Burr and other MS sufferers. Clive was in attendance and it was great to see him with a huge smile on his face and still managing to get out and about, despite the awful circumstances.

Brabazon kicked off proceedings with some pretty high-octane thrash but there seemed to be something missing from their sound. Perhaps a second guitarist would help? Isolysis didn’t manage to lift the crowd at all unfortunately. Both bands had some good numbers but maybe today was one of those days when thrash refuses to work in daylight?

Metalloid managed to stir the masses, albeit temporarily. Opener ‘The Sadist’s Council’ is a great showcase for vocalist Pete Morten’s range and stage antics and the Helloween inspired ‘Soar Like An Eagle’ drew the first signs of life from a so far unmoved audience. Metalloid could have a big future.

Hanging Doll were up next and I’m not sure that they really belonged on this bill as they are essentially a Goth band and don’t really fit into the metal category. Hanging Doll are clearly a very talented band with good ideas but they’re just not for me, I’m afraid.

Nemhain have also had good ideas but there were those in attandance who thought that recruiting fetish model Morrigan Hell as lead vocalist was not one of their better ones. And perhaps they had a point.

The day was wearing on now and Hard rockers Hammerhead really had the place jumping with their high adrenaline blues/rock. I was sure I had seen most of the HH members in other bands at other times but I couldn’t recall any names from amongst the familiar faces. Not to worry – if Hammerhead are going to play on, we might all be hearing about them in the not too distant as they are a quality band with some great hooks on a well practiced theme.

But then – the one that a lot of people had been waiting for. The one and only Cloven Hoof, playing their first gig since Satan was in short pants. The Hoof played a storming set and vocalist Russ North, now sporting regulation haircut, showed that he still has what it takes with probably the top vocal performance of the whole weekend.

The headline act were billed as ‘Hi-on Maiden And Friends’ and rumours were rife that members of Maiden would be appearing during Hi-on’s set. Whether these rumours originated from those concerned with ticket sales or from over-excitable fans is a mystery but also an irrelevance. A personal appearance by a band member would have been a bonus but the weekend was certainly no poorer for Maiden’s absence. They would have been completely mobbed anyway so it was probably a smart decision on their part to stay away.

The spirit of the NWOBHM was in The Ruskins this weekend; in fact, it was as plain as a swift blow from Eddie’s axe and it was wonderful to live it again.

Hi-on captured that spirit with the first part of their set-list made up entirely of songs from the first two Maiden albums. I’m not a huge fan of tribute bands generally but Hi-on are one of the best I have seen and I would pay to see them again.

Speed Harris has mastered Steve Harris’ stage movements to a tee and the rest of the band show why they have an endorsement from Maiden themselves.

But Hi-on were not the very last act to play live at The Ruskin Arms. That honour was left to the people who had come from far and wide to be here and officially, the last act to perform live on stage at The Ruskin arms was a ‘Heaven Can Wait’ style choir belting out traditional set-closer ‘Iron Maiden’. Only this time it wasn’t just the set that was closing…

Hi-on Maiden set-list: ‘Ides of March’, ‘Innocent Exile’, ‘Charlotte the Harlot’, ‘Murders in the Rue Morgue’, ‘Wrathchild’, ‘Phantom of the Opera’, ‘Prowler’, Killers’, ‘Running Free’, Iron Maiden’, ‘Remember Tomorrow’, ‘The Number of the Beast’, ‘The Rime of the Ancient Mariner’, ‘Two Minutes To Midnight’, ‘Run to the Hills’, ‘Hallowed Be Thy Name’.

So it’s goodbye to the Ruskin Arms but it will live on, just like the music that was first played on its stage all those years ago…