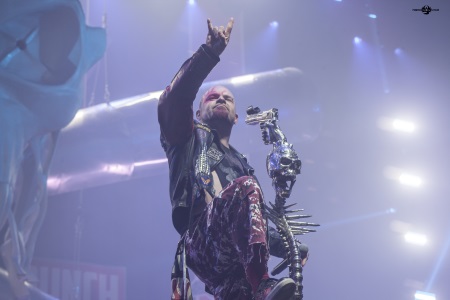 Five Finger Death Punch vocalist Ivan Moody’s demons have long been well documented, and it seemed only a matter of time before the inevitable happened.

The straw that broke the camel’s back came on stage in Tilburg Holland last June. Moody missed the first song that night and later in the set Jason Hook had finally had enough, walking off stage after slamming his guitar to the floor where it bounced several times before unceremoniously landing at the singer’s feet.

Moody would later publicly declare that he had played his last gig with the band. However the band later went on to release a statement saying that “any band that tours as heavily as we do, will inevitably have a few derailments, but the train will keep moving”, seemingly implying that all in the camp was once again rosy, only for Moody to check himself into rehab and the band to temporarily recruit Tommy Vext to finish the remaining run of dates.

So they went from Moody to Vext and one had to wonder whether it could all work out.

It did indeed work out, with the Bad Wolves vocalist seamlessly slotting in both audibly and visually, and maybe the very fact that the band had a ready-made replacement in place, was all the inspiration Moody needed to get his act together.

So with the knucklehead express train back on track, it pulled into London tonight with Vext also onboard for the final run of dates, presumably as an insurance policy should the singer relapse once again.

The evening kicked off with Of Mice and Men. It’s been a year since founder member Austin Carlile departed the Californian band and with Aaron Pauley possessing the voice that he does, there didn’t seem much point in looking elsewhere for Carlile’s replacement.

Pauley effortlessly embraces the frontman role with aplomb, so much so that later in the evening Ivan Moody declares him as “one of my favourite singers”.

Now that’s not a bad reference to have on your CV, though I doubt Carlile needs the leg up. His band take control of the massive crowd from the off with the vocalist/bassist in particular grabbing each and every one of them by the scruff of the neck.

Starting with the hard-hitting ‘Unbreakable’ which was the signal for the first of many circle pits tonight, with OM&M probably fairing even better than the headliners in this department.

Drummer Valentino Arteaga orchestrated the wall of death at the beginning of ‘Public Service Announcement’, which looked pretty savage from my safe haven vantage point, the band’s hardcore fans eagerly getting involved.

A quick blast through ‘Pain’, ‘You Make Me Sick’ and ‘Warzone’ see’s Pauley trading his impressive clean vocals with the genre-defining growl to great effect leading into the all too soon set closer ‘The Depths’, a consequence of these ever increasing three band bills.

OM&M are a solid, slick, and tight unit, who owned their stage and played the crowd well. I eagerly await their return to the headliner’s spot next year with the release of their new album ‘Defy’.

Prolific Swedish Metallers In Flames seem to have been around forever, and with a twelve album back catalogue to lean on, there’s no shortage of quality material to choose from to cement their place as main support. 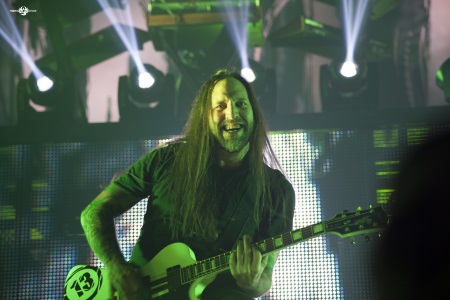 As a band, they’ve never been afraid to change, freshening things up and remaining current, so it’s no surprise that half their set tonight is culled from their most recent release ‘Battles’, completely refraining from anything pre-2000.

They start off as they mean to go on, with ‘Drained’ immediately grabbing the enthusiastic crowd’s attention with shirts getting torn off and thrown in the air – there are more naked torsos here than in a mannequin factory. 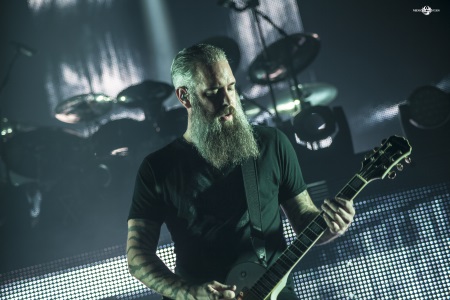 Introducing ‘Drifter’, singer Andres Friden jokingly berates a fan for taking a photo whilst he was taking a drink of water “don’t fuck up my image dude” and urges everyone to get in the circle pit and make new friends. I’m guessing they don’t have Tinder in Sweden. 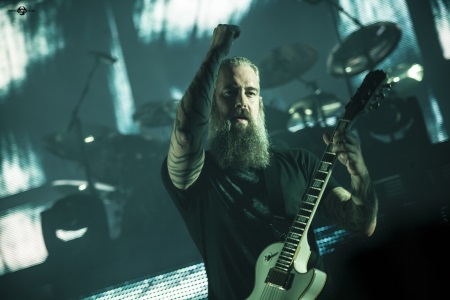 “Let’s go animal once in a while” he orders, whipping everyone into a frenzy as guitarist Bjorn Gelotte leads the way with the frenetic opening.
Their last song this evening is the aptly named ‘The End’ and with Friden telling the crowd “we don’t know how to do anything else, I promise you one thing, we will be here until forever.” 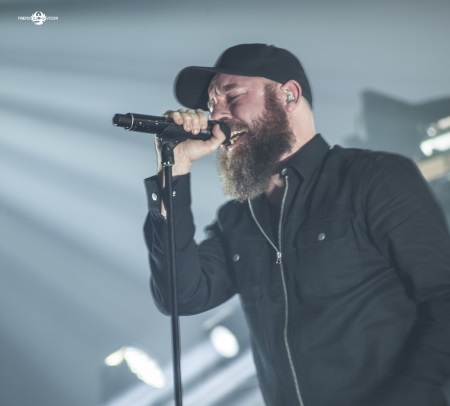 I don’t think there will be many complaints as their flame has never flickered brighter, In Flames were quite simply…on fire tonight.

It takes balls to invite the calibre of those two bands to open the show, and FFDP have more balls than a bingo caller.

‘Lift Me Up’ gets proceedings off with a bang, Moody prowling the stage menacingly, eyeing up the front rows, there’s more testosterone on stage tonight than in Arnold Schwarzenegger’s bathroom cabinet. 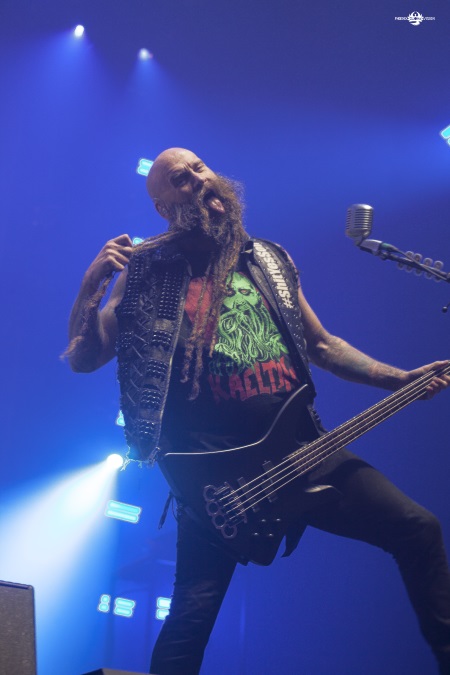 This guy likes to see his people interacting constantly, in the past urging them to crowd surf to the front and shake his hand, a security team’s nightmare which got their 2010 Download performance cut short for safety reasons.

With this in mind, Moody keeps it simmering rather than boiling over these days. ‘Never Enough’ gets the whole of the standing area, maybe five thousand fans, jumping as one under the singer’s command, an impressive sight.

‘Wash It All Away’ has Zoltan Bathory laying down his solid rhythm, allowing Jason Hook to do his thing over the top, and ‘Got Your Six’ shows why Jeremy Spencer is making waves in most top drummers polls these days. 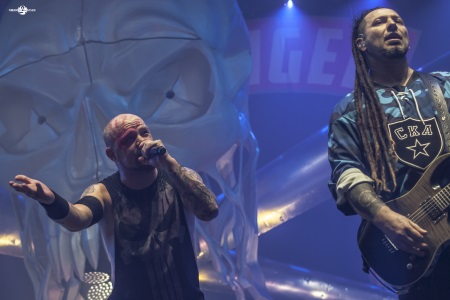 ‘Ain’t My Last Dance’ saw Moody inviting both Tommy Vext and Aaron Pauley up on stage, the three singers bouncing lyrics off each other to great effect, thankfully more like the three musketeers than the three tenors.

It was hard to imagine when ‘War Is The Answer’ was released almost ten years ago, that the band would do ‘Bad Company’ the justice it deserves, but the Paul Rodgers & Simon Kirke song was given a lyrical tweak here and a time change difference there, and justice was indeed served, so much so that they’ve pretty much made this classic into a staple of their live set.

It goes down like the old favourite it now is amongst the self-proclaimed knuckleheads. 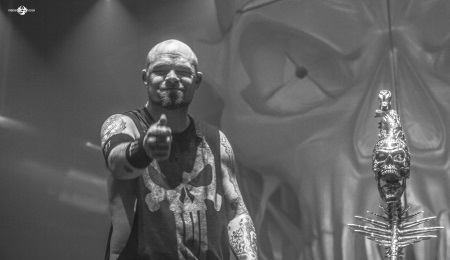 FFDP have a rhythmical style unlike almost anything out there and their equal parts melody and Metal sets them aside from the mainstream, never more so than on ‘Burn MF’.

Its catchy choice lyrics has Moody pointing out and teasingly chastising a wheelchair-bound woman, “lady, you have a potty mouth” before breaking into a raucous laugh and dispatching a signed shirt up to her in the seated area via his roadie; you gotta love this guy. 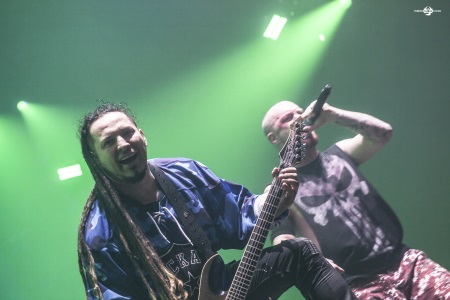 How often do you listen to a song and wonder what the hell was that about, with lyrics that mean absolutely nothing? I know some of the best songs ever written have primary school lyrics but I like a song to have a meaning or a story, and that’s what you get with these guys.
Moody’s lyrics are like a timeline of his life and you can imagine he’s probably lived every song.

Next song up ‘I Apologise’ is no exception and is the first of a trio of acoustically rearranged songs, written by Moody to somehow try and atone his previous misgivings.

Singing the heartfelt words to Jason Hook and ending the song with the words “I love you man”, was almost enough to make a grown man shed a tear. 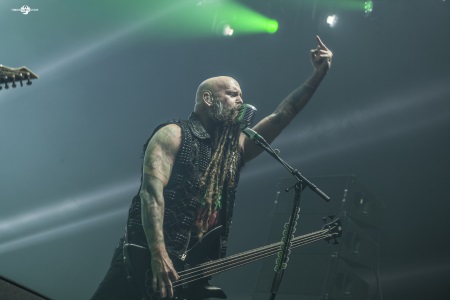 ‘Wrong Side Of Heaven’ and ‘Remember Everything’ wrap up the nylon string section of the show, with the crowd singing along with Moody to every single word.

‘Coming Down’ with its self-loathing lyrics is certainly no paean, but it is a lamentable song that has the vocalist singing from the heart, something probably many in attendance can relate to, powerful stuff.

You can see Moody’s gentler side whenever he gets a birthday boy or girl up on the stage, and his meaner side when having the odd stern word with certain over zealous security while brandishing a baseball bat, later handed to teenage boy on the front row, he’s not a man to be messed with, and next song ‘Jekyll & Hyde’ is definitely an ode to himself. 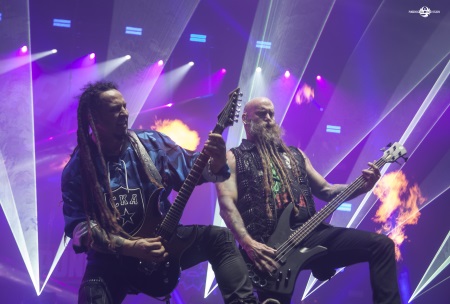 ‘Under And Over It’ has Moody and Chris Kael trading vocals, the bassist cutting a mean figure that you wouldn’t like to meet in a dark alleyway at night. He has to have the most impressive beard in Metal, his dreadlocked muff tickler is so long it’s in danger of getting caught up in his strings.

With ‘The Bleeding’ bringing an end to the show at just over the hour mark, FFDP simply have to play a longer set than this as there are so many other songs that need to be played live. 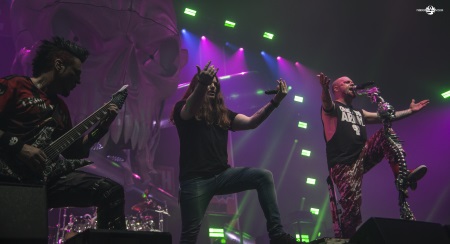 A sea of mobile phone lights set the tone for the anthem for anyone who has had to end a traumatic relationship, and it’s a real goose-bumper with Moody screaming the words “it’s over”.

Before exiting the stage he declares he’s just played “the greatest show of my life” – I’m guessing Tilburg was probably the worst!

Let’s hope the muted Moody side project for 2018 is just that, a side project, and that he’s at the helm for their much anticipated new album in 2018. 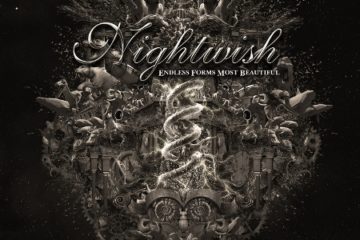